Woke up just before 8; computer still on.  Watched the morning show; & ate leftover muesli from the fridge.  Worked on the blog; but connection wasn’t good enough to upload.  Capt. Glenn reported that we are now sailing in the northern Tasman Sea.  Moving at a moderate clip of 17 knots (19.5 mph); using only 3 of our 6 engines.  He feels that we can maintain this speed until our arrival in Newcastle on Monday.  He’s expecting 6’ seas, & mostly sunny weather.  His quote for the day “People may forget what you told them; they may forget what you did for them; but they will never forget how you made them feel”.


The usual bridge class at 10.  Our numbers fluctuate a bit day to day, as some finally succumb to the lure of the other tempting events that sometimes conflict.  I don’t know......would I rather have too much or too little to do?  I do know if I could have my way, bridge wouldn’t start until at least 11! 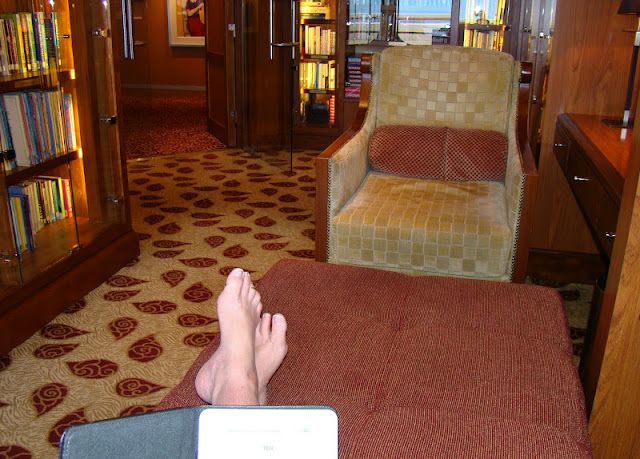 I’m also falling into another routine after bridge, settling into the library afterwards to read.  There aren’t many places where one can find complete silence to read.  And I’m one that is easily distracted by sound or music.  I used to read up in Palm Court; but that room is used so often for dancing that it’s not usually quiet for very long stretches.  So, the library is working out nicely for me; & it’s very close to ‘home’. 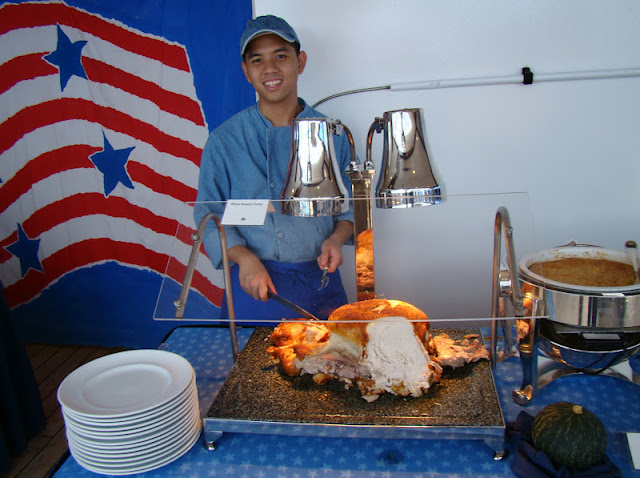 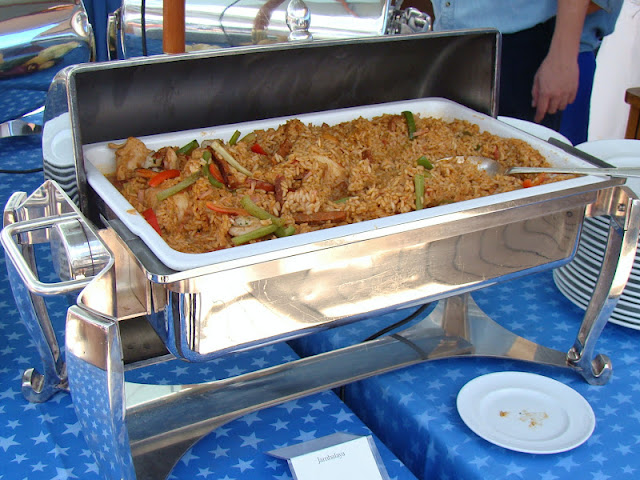 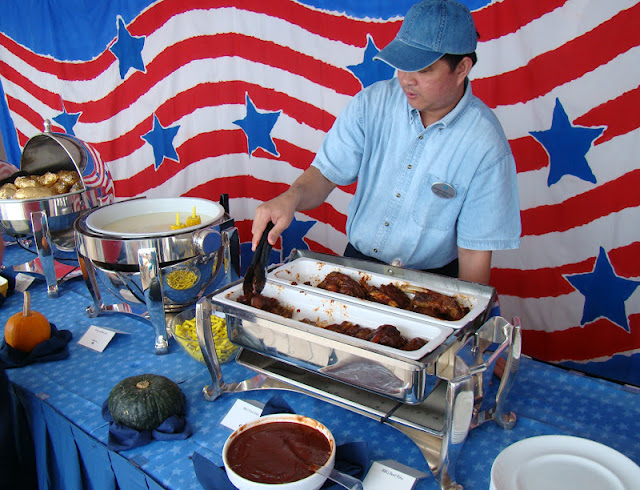 This afternoon was the “American” themed buffet up on the Lido deck; & it’s one of my favorites.  My personal preferences are the BBQ ribs (because the sauce is just the right recipe IMO), prime rib, okra fritters (oh man, they make you wanna weep), a cold salad of bits of fried chicken with sun dried tomato vinaigrette (nicely spiced) & jambalaya (could have been a little spicier). 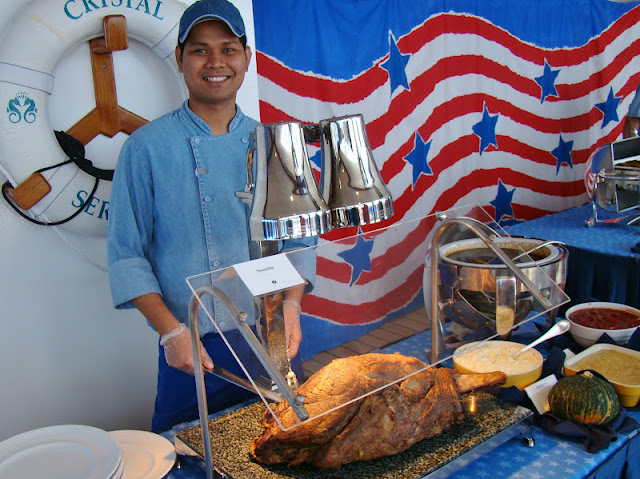 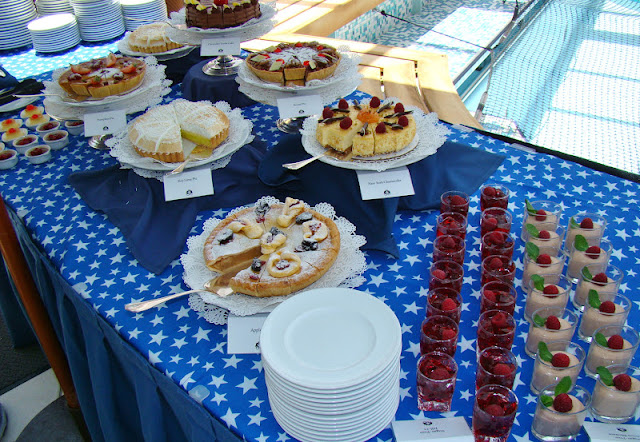 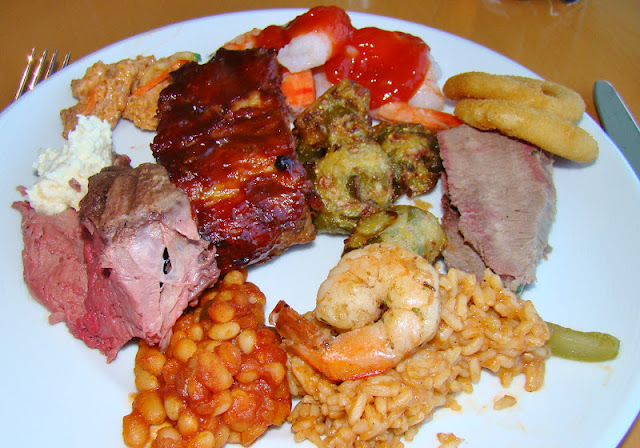 I found a quiet table in the air conditioned area; reading & eating.  Celeste stopped by the table & chatted a little while.  And then later, she & I sat together at the Hollywood Theater to listen to Bruce McGill’s Q&A.  I love these informal settings where nothing is ‘off limits’.  And there were many good questions raised.  Since I haven’t come close to seeing a third of his movies, I really enjoyed seeing his range in a series of clips from his most popular movies.  Bruce said wonderful things about most every actor or director he’s ever work with; with one exception………..  He obviously doesn’t approve of the way Steven Seagal treats his fellow thespians.


One piece of business that we all had to take care of today was appearing before the Australian Immigration folks.  They set up in the Stardust Lounge during afternoon hours.  We were asked to line up, retrieve our respective passports, present them along with the landing cards we filled out a few days ago, get them stamped, turn the passport back in to the staff.  I was in & out in about 3 mins.  Painless enough!


I went back to the cabin to try the internet again.  I was able to get on; but unable to upload.  We must be in another of those hopeless satellite voids.  Surprising since we’re not that far from a land mass.  So, I grabbed my blanket & got comfy on the verandah to read a while.  There are dark clouds closing in & the wind was a little cool.  I stayed until it was too dark to read.  I had a long debate with myself……..order in or eat upstairs in Tastes.  I would have liked to have stayed dressed & alert until 10 pm when they were ‘performing’ the Liar’s Club.  No matter where I ate, I figured that was going to happen. 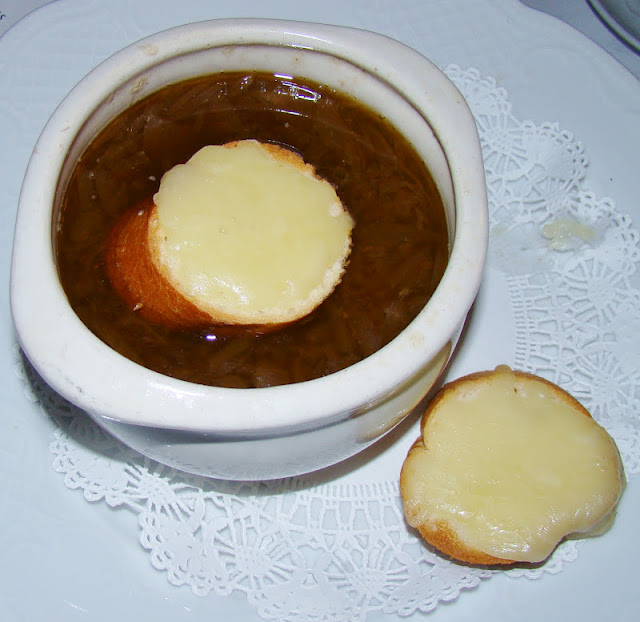 Since I had eaten such a big lunch, I thought I’d stay in & order off the regular room service menu.  I ordered the French onion soup, which was just so-so.  If memory serves me correctly, in the past it’s been way too salty.  That was not the case tonight; it just wasn’t that flavorful. 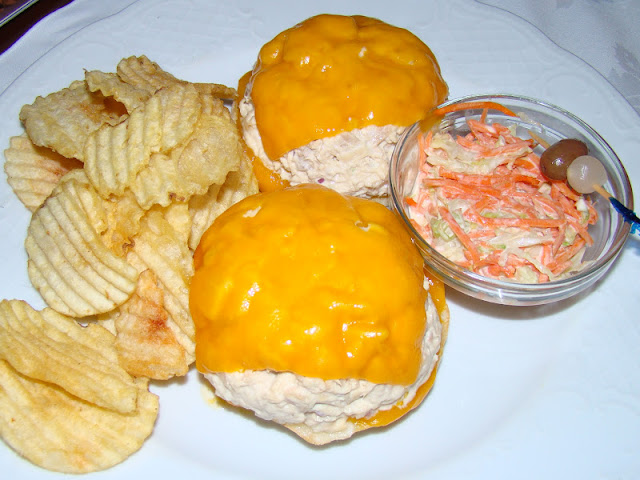 I also ordered a tuna melt with chips & slaw.  Little did I know that it would be 2 tuna melts.  It was quite good; but way too much food.  So I put one away in the fridge (maybe breakfast?).


When Liz brought my dinner, I asked her if she had some time to chat.  I wanted to know a little more about her life before Crystal.  She’s 23, the 2nd of 6 children from a small town not far from Bombay.  Her family sent her to boarding school (although I don’t think it’s the same as what we consider boarding school).  She had several jobs in the hospitality industry over a period of 18 months.  It was while she was waiting tables at the Four Seasons in Bombay that Crystal ‘found her’.  Being eager to see the rest of the world, she jumped at the chance.

We chatted a good bit about crew life; & I shared with her info that crew friends with other cruise lines have shared with me.  She agrees that she was in the right place at the right time to be discovered by Crystal.  She’s VERY happy to be here.  And they’d be lucky to have her for a long, long time.

After dinner I watched a movie on tv called The Romantics, starring Katie Holmes & Josh Duhamel.  It was a light hearted romantic comedy; but the ending wasn't really an ending at all.  I'm still not sure who got the guy???


I am beyond frustrated with the internet service today.  It’s days like today when I want to throw in the towel; & admit it’s not worth it.  I’ve logged in 4 different times; wasted over 3 hours….and I still can’t get yesterday’s blog uploaded.  Part of it may be the blogger website itself; but I’m calling it quits tonight.  Maybe I’ll get lucky tomorrow.