Yesterday’s long nap ruined my night’s sleep.  I finally got up about 7:45; watched the morning show; & then went up to the Bistro for some breakfast.  The strawberry supply is still primo; & I’m going to continue to take advantage of the sweet prosciutto as long as it stays as good as it has been since I boarded.  I wish I had access to Crystal’s supplier, because I can’t find anything close to this authentic back in FL.  To have it sweet, not too salty & buttery tender is almost unheard of outside of Italy.

Capt. Glenn reported that the weather was going to be calm & beautiful today, & the next several days.  He mentioned that 3 years ago today during the world cruise, & in this very location, they traveled through some extremely rough seas.  We will be leisurely cruising at 17.6 knots (20 mph) on 3 of our 6 engines.  Everything is looking good for our 7 am arrival tomorrow in Adelaide.  His thought for the day…..”The beautiful thing about learning is that nobody can take it away from you.”

Back to bridge class this morning.  I won’t dwell on ‘bidding’; it’s still my Achilles’ heel!  There were many great lectures going on today; & I scurried from bridge to attend one on our next port of call, Adelaide.  This was given by Dr. Jean-Pierre Isbouts, a National Geographic author & award winning TV producer.  Colonel Light, the surveyor general, wanted to create a city center surrounded by parks & gardens, wedged between the Lofty Mountain Range & the beautiful Gulf of St. Vincent.  He created a walking city that would look right at home in Great Britain.


Afterwards, I went to the Lido Buffet for lunch.  I saw Peggy & Elaine as I was walking through; & they asked me to join them.  I fixed a salad; had my quota of hearts of palm; shrimp cocktail; red & white cabbage salad with tomato, onion, feta cheese & toasted nuts (very tasty); & ham coronets with herbed garlic cheese.
I also had a drumstick braised with paprika cream sauce (okay); & a half of a pulled pork sandwich.  Unlike any BBQ I’ve had before, Crystal put their own spin on it, adding creamy corn slaw & jarlsberg cheese served on caramelized onion bread.  It was pretty good as long as you don’t grade it by southern standards. 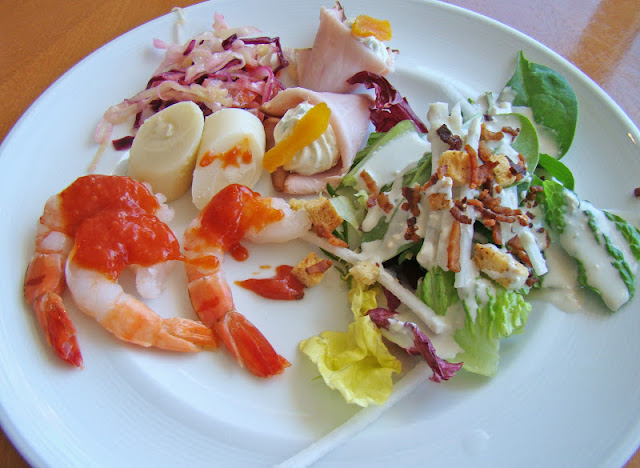 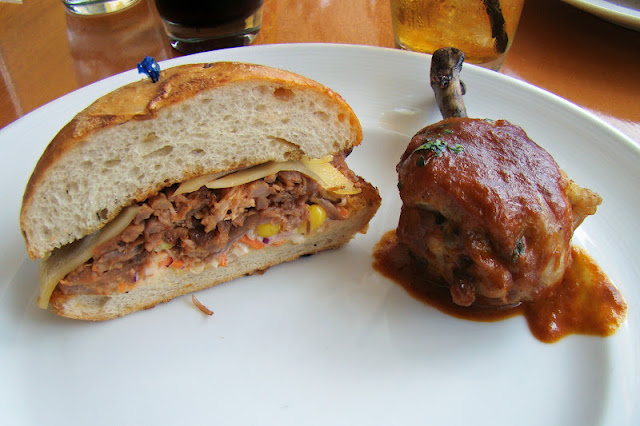 I was late getting to the Hollywood Theatre for the next lecture; & therefore had to stand in the back.  Shelby Coffey (former editor of the L.A. Times, President of CNN Business News & Exec. V.P. of ABC News) gave a humorous look at “The Media World Gone Mad”.   His impersonations of Bill Clinton & Henry Kissinger were hilarious; & he brought to light how diligent we must be when looking for reliable news info on the web.  He shared funny stories about the responsibility of being the ‘gatekeeper’/censor for a live news network.  Mr. Coffey will speak again later in the cruise; & he said it was also planned for the movie theatre.  I hope they reconsider that locale, as he could easily fill the Stardust Lounge. 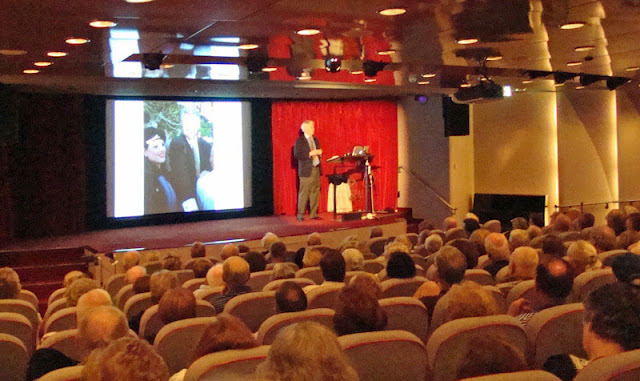 From there I rushed to the Avenue Saloon to hear master photographer, John Parris, speak.  I was hoping this would be a master class where one could pick up tips on composition & the like.  Although I did enjoy looking at some of his work, this presentation was primarily an infomercial for the private photo shoots he can arrange for you.  He does private commissions starting at $595.  For this consultation fee, he will help you choose your wardrobe & suggest settings throughout the ship or ashore that would best suit your personality.  Once he does the shoot, he will print & publish your photos into a coffee table type book for an additional fee (dependent upon how many pages you want).

During the day I had the opportunity to speak with several of the full W.C. passengers who attended one of their planned special shoreside events last night in Melbourne.  It was called “Moulin Rouge”; & was held at the Regent Theatre.  From the description given, the theatre is a classic building; & the planners did a good job of setting the right mood with the décor.  There were some who said they enjoyed the evening; but 75% of the people I spoke with were not as impressed.   In their opinion, the Crystal Ensemble could have done a more professional performance.   Upon arrival back at the ship, they were treated to a very nice, late dinner spread in the Crystal Cove.

You would think I’d learn my lesson after yesterday; but no…..I laid down & took a nap.  This one only lasted 2 hours; & I’m sure I’ll pay the price later.  I’m in between books on my Kindle.  I’ve been hesitant to start another one because I was hoping to clear the waiting list for Steve Job’s biography from the library.  His is a huge book, which I’d be lucky to finish even if I did start it.  I shall check on my waitlist status tomorrow.

I treated myself to a nice soaking bath (something I NEVER do at home), while I waited for Liz to bring dinner.  Tonight was a very good menu.  For an appetizer I had poached lobster salad (cut into medallions) with an avocado & tarragon dressing (sweet & tender). 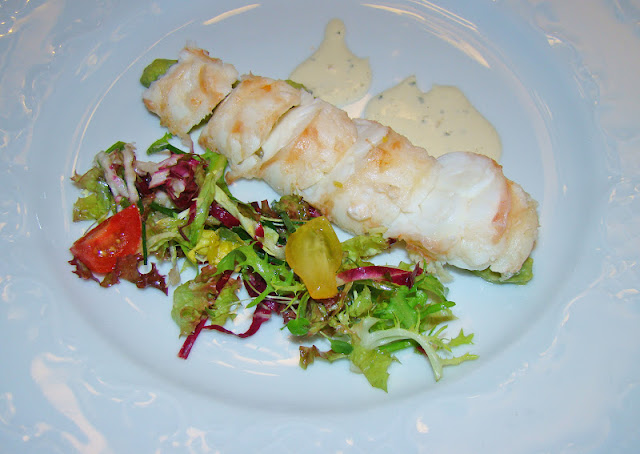 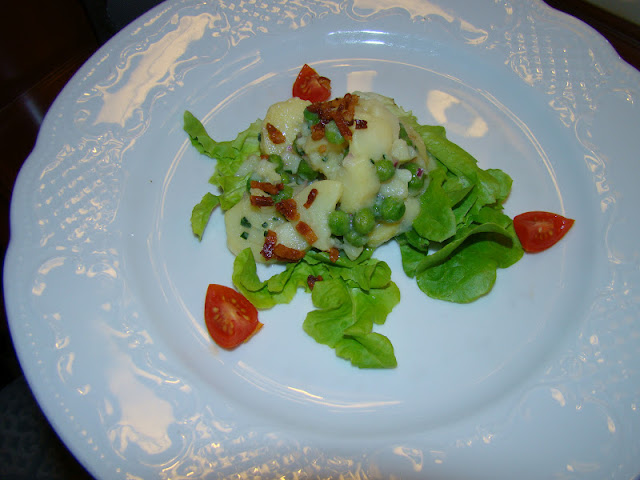 In my quest to try more fish, I tried something tonight that I have no clue WHAT it actually was.  It was broiled fillet of New South Wales Red Emporer; so I’m guessing it’s local.  And it is a mild, white fish that was cooked to perfection.  It came with a beurre blanc sauce; buttermilk-mashed potatoes & I substituted glazed beets with the vegetable lasagna.  No, I did not have a carb with a carb…..the lasagna had no pasta, instead it was layers of zucchini & eggplant with ricotta & tomato sauce.  It was fabulous. 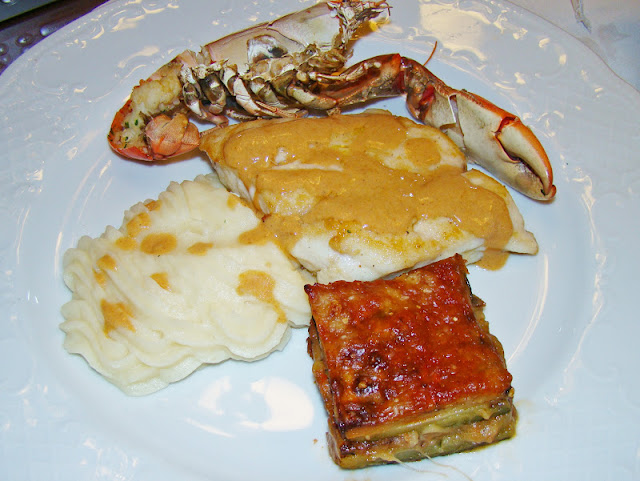 We are expected to arrive in Adelaide way before 7 am in the morning; so I thought I’d sleep with the drapes open.  When I turned out the light, I could see a bring moon shining on the water.  I had to try to photograph it. 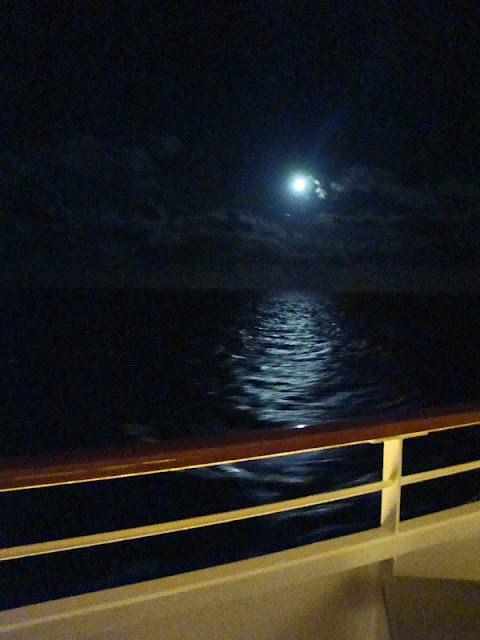