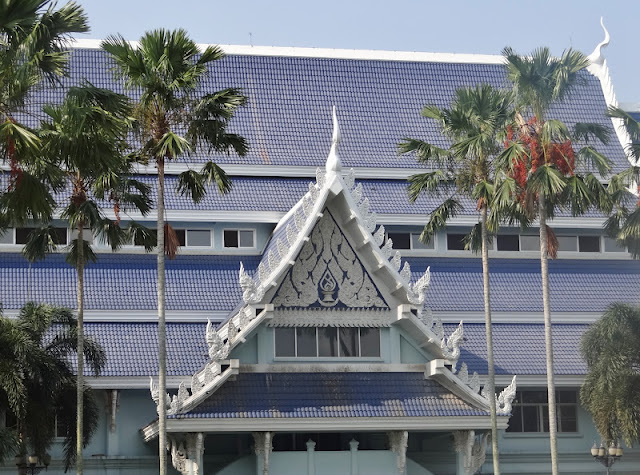 My morning tour was called “A Thai Temple & Chinese Pavilion” (LAE-AW1).  There was only one bus (#5); & it was fully packed.  We were accompanied by Neil, the Chief Photographer; & our guide, a lovely woman named Suda.  We drove south along the beach road to Pataya.  Suda was explaining that they refer to Pataya as “Sin City” (as we would Las Vegas).  The young people like it for its bars, strip clubs; their parents hate it. 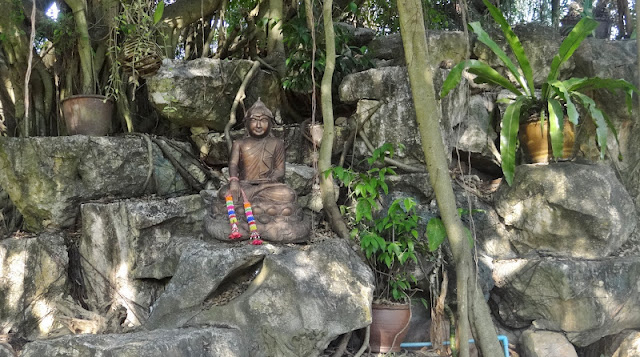 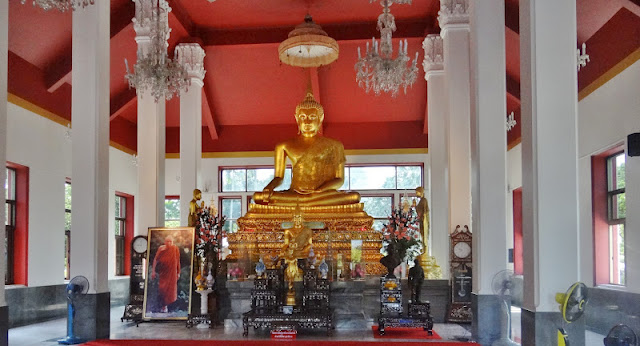 Our first stop was Wat (Yan)sangwararam, a 146 acre complex of temples.  The area contains various buildings that range from a Swiss chalet church, stupas, temples, Indian & Chinese shrines.  The skies were such a beautiful shade of blue with white puffy clouds; but it was another scorcher.  If I had been forewarned, I would have slathered on some bug spray.  Gnats were flying everywhere; & I had flies crawling all over my arms.  Waving your arms or swatting at them didn't even faze them. 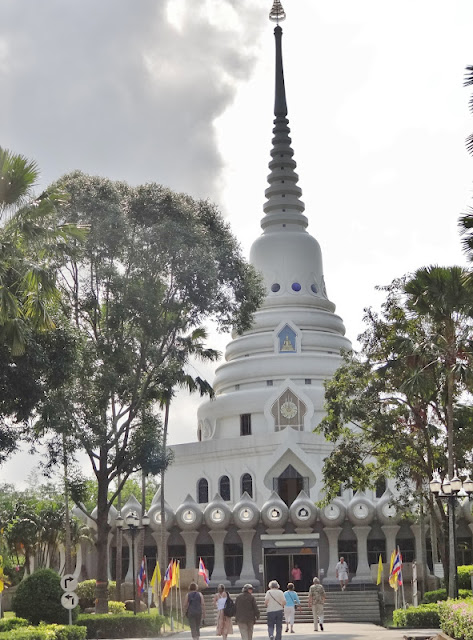 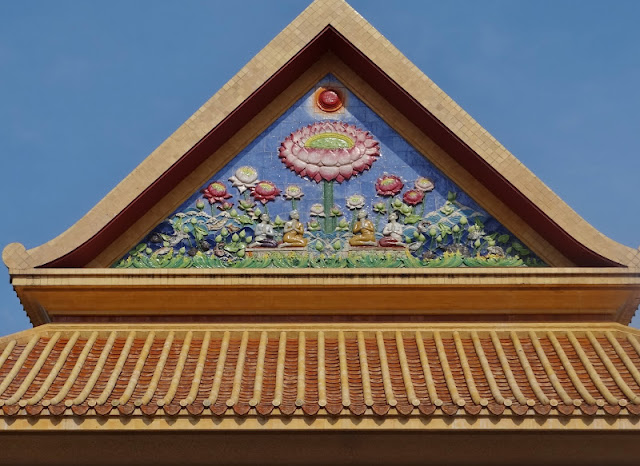 There was one Lotus Pavilion that housed a gorgeous sitting Buddha (no info on the exact size).  I didn’t know that you weren’t supposed to photograph it; I saw no warning sign.  I shoot without flash; & nobody saw me. 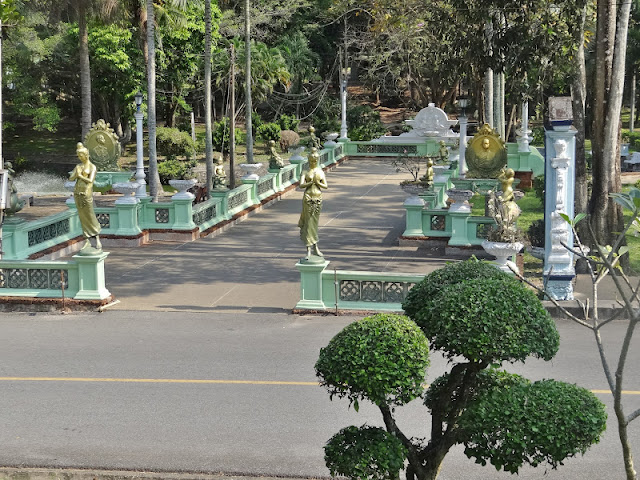 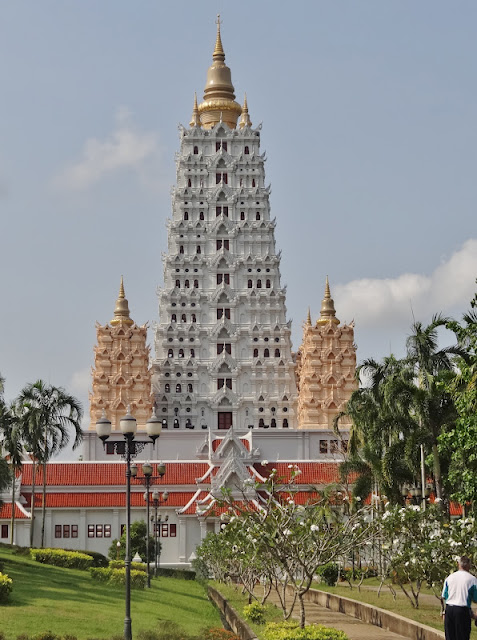 If the weather had been cooler; & given enough time there, I would have enjoyed wandering off in every direction to a different ethnic place of worship.  Each building was beautiful in its own right; & was probably equally interesting. 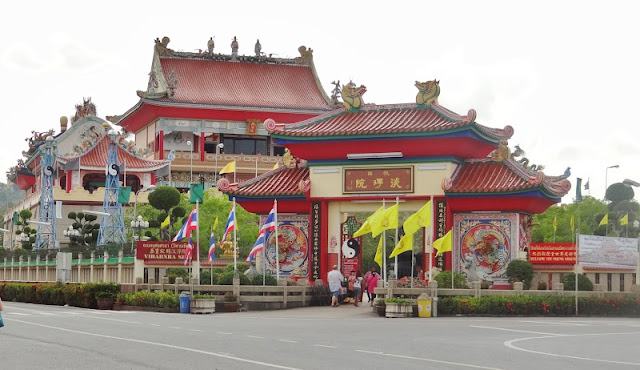 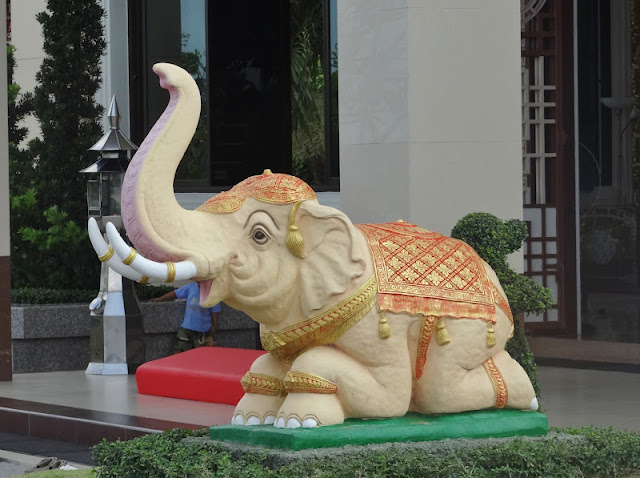 A very short drive away we visited Viharna Sien, a brilliantly colorful Chinese Pavilion that was built in 1993.  It was a feast for the senses as well.  There was soft ‘spa-type’ music playing in the background; a strong smell of incense & a tinkling of wind chimes.  It felt….spiritual there.  Not being that interested in the antiquities that were housed within, I chose to walk the perimeter of the property & take photos. 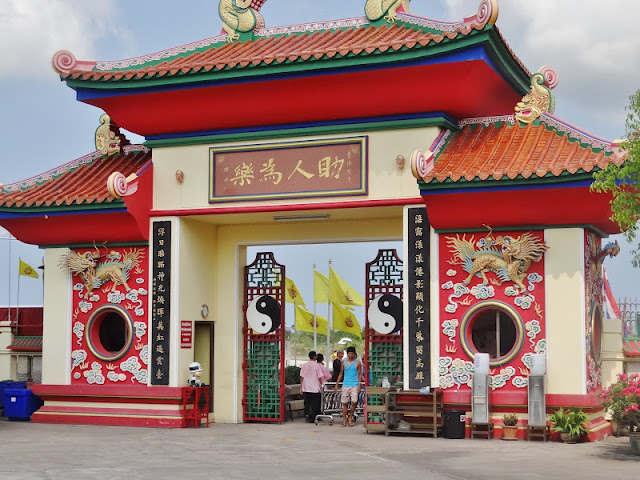 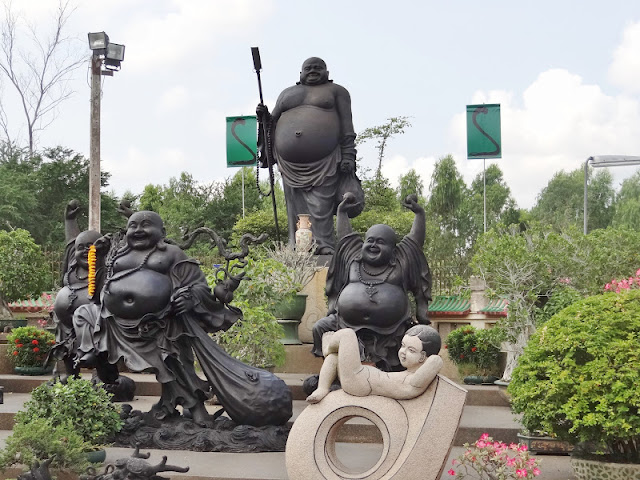 There were huge displays of cast iron statues, whimsical granite statues, golden goddesses & dragons.  Off in the distance I could see the Buddha Mountain, which was to be our last stop on the tour.  The intricate carvings along the pagoda’s roofline boggle the mind.  I’ve never seen color as intense as was portrayed in the lacquer panels at the front gates.  Visual overload! 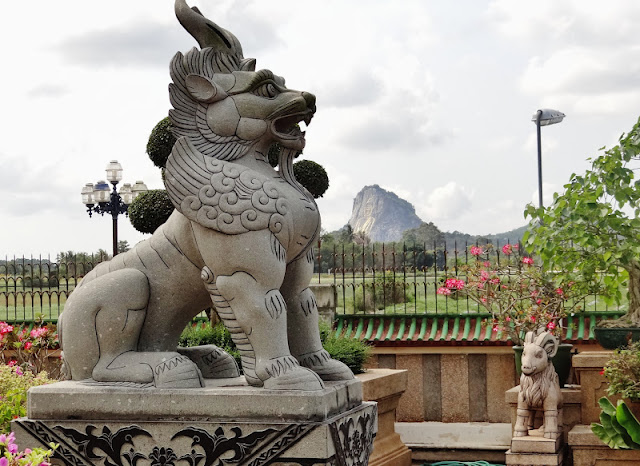 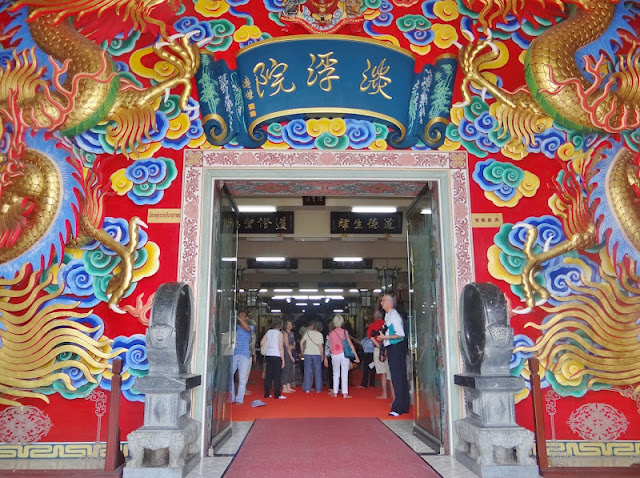 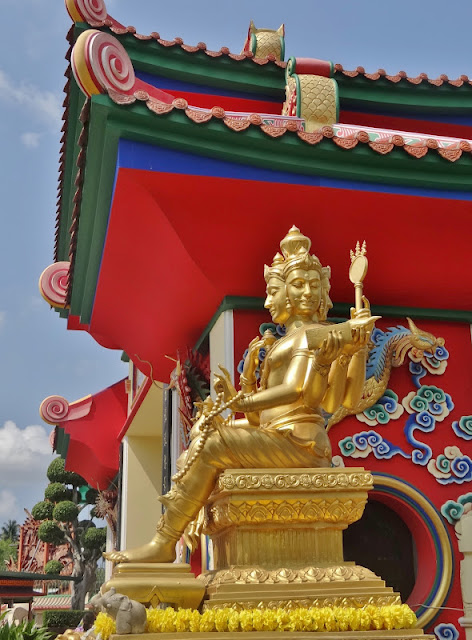 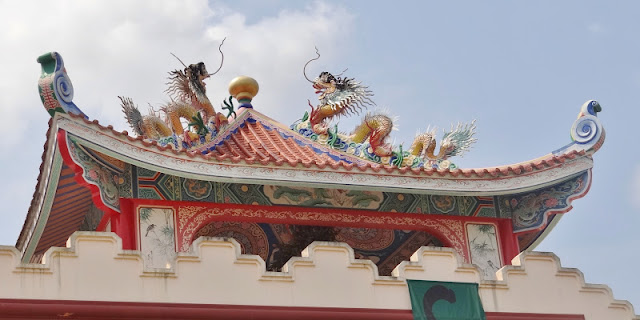 Others took their time on the grounds, while I walked back toward the bus.  There was a refreshment stand & a small market where one could buy anything from vegetables, fruit, live fish, eels & birds.  I watched as several people drove up in cars, ‘bought’ fish or birds from the vendor; & then they went to the lake or out on the parking lot & released their ‘purchases’.  Suda had explained earlier that Buddhists celebrate birthday, anniversaries of marriage or even death by taking a living thing; saying a special prayer & releasing it back to the wild.  I saw many such places during our time in Indonesia.  Birds in cages right along the roadways; that probably were caught, released & caught again for that very purpose. 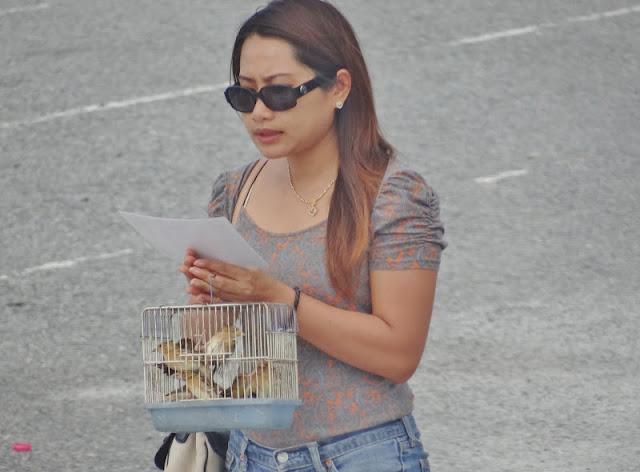 From there we drove a few miles up a winding road to get a better view of Buddha Mountain (Khoa Cheejan Mountain).  There on the flat side of the face of a cliff is an outline of a sitting Buddha that is 426’ tall by 229’ wide.  It was laser carved & then filled in with gold plating.  When the sun hits it at just the right angle, it appears to glow.  I would love to see what it looks like on a bright full-moonlit night.  We were treated to fresh coconut water from a stand across the road.  They had Durian (stinky fruit); & we were trying to coax someone into trying it.  Suda says it’s known as the king of fruit, because ‘it tastes like heaven; but stinks like hell’. 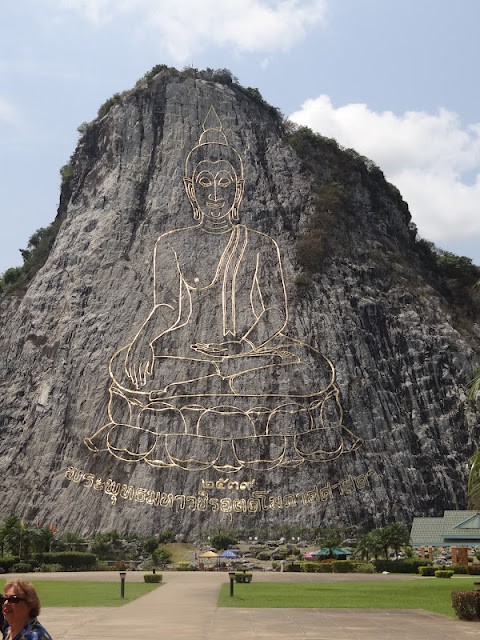 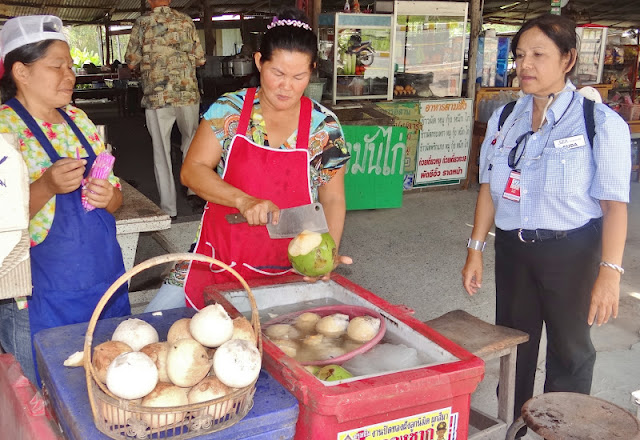 We made it back to the ship about 12:45.  I went up to the Lido to check out the buffet.  I ended up eating; & talking a while with Peggy, Elaine, Pat & Ray.  Lunch was delicious….grilled fish with charred tomato butter sauce,  BBQ roasted chicken, sautéed baby bok choy, & wok fried beef tenderloin with shallot-lime sauce over rice. 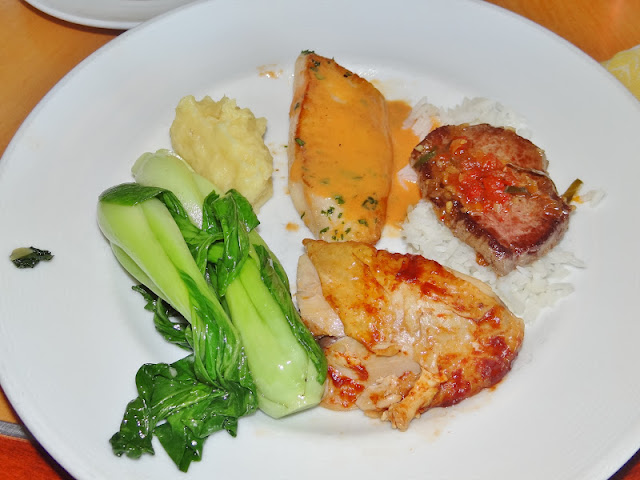 Went back to the cabin & worked on photos for a while; & then took a nap.  When the ship’s doctor opened his office at 5pm, I went down to consult with him about replenishing my supply of prescription meds.  I had to run everything by his nurse (who was Italian) first.  The Concierge seemed to think it wasn’t that big of a deal; but Nurse “Ratchett” was moaning & groaning about their limited supply & having to find & pay a doctor in Hong Kong to get meds for me.  My heart was beginning to sink; was this all going to be one big mistake?


After filling out numerous forms, I was able to talk to the (nice) Doctor.  He pulled out his P.D.A. & looked up some of my meds that he wasn’t familiar with.  He did have a few of the exact meds; & was able to substitute several more.  He’ll dispense them tonight; & I can pick them up tomorrow.  There is only one he couldn’t make a substitution for; & he said he’d contact a doctor in Hong Kong to see if he or the port agent could get it filled there.  I showed him how badly my legs & feet are still swollen; & he prescribed a diuretic (‘water pill’) which I could take with me tonight.  He recommended I not take it until morning or else I’d never get any sleep.  $438.00 later + Hong Kong port agent fees……Ca-ching, ca-ching!!


Since it was beginning to look like a sure thing, I made a stop by the shore excursion office to pick up the tour books on the last 2 segments of the cruise.  More decisions that need to made very soon, since a great number of passengers reserve their tours online long before they board the ship.  That means less time for blogging & photo editing; more time for homework.


There was one bus load of passengers that were held up in traffic; & therefore, we were 45 minutes late leaving port.  I ordered dinner; & got a quick shower.  Tonight’s dinner featured Thai cuisine; & there were some excellent choices.  I started with Thai seafood salad which consisted of calamari, mussels, shrimp & lobster tossed in a lime-chili dressing.  Wow! 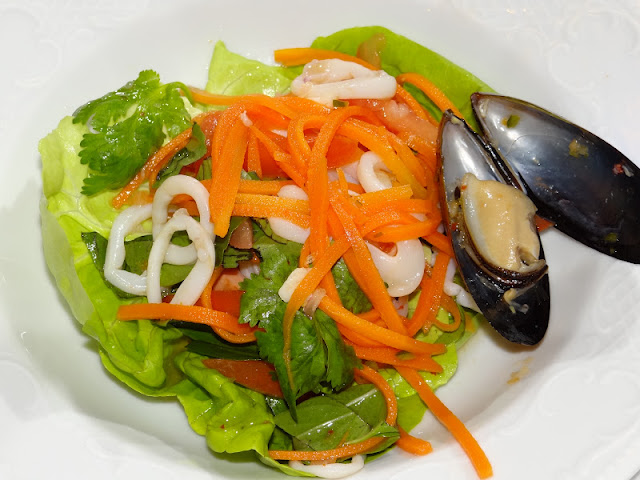 I had an appetizer portion of the pasta special….rigatoni with tomato sauce, artichokes, sweet garlic, eggplant, parsley & buffalo mozzarella.  Always a winner. 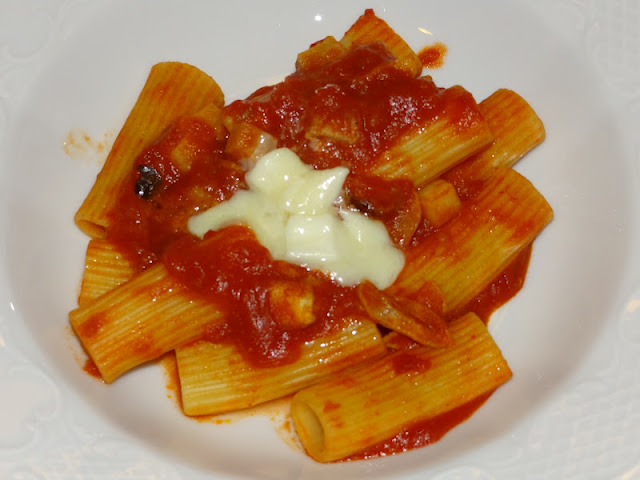 The entrée to beat all entrees, Thai red shrimp curry.  It contained baby eggplants & was served over steamed jasmine rice.  I could have eaten several bowls of that stuff.  It was the best Thai dish I’ve ever had. 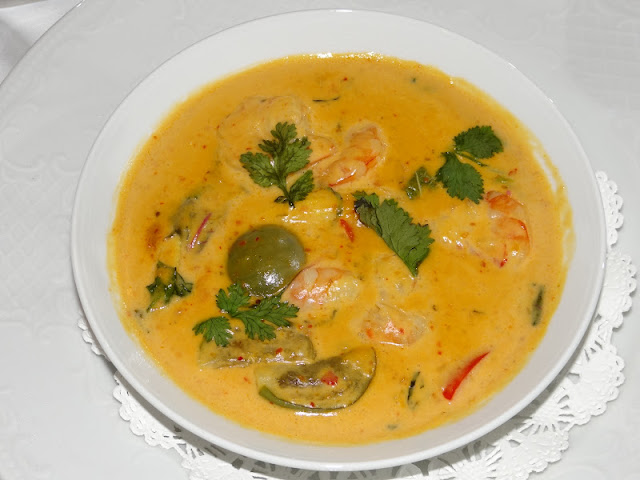 I worked on photos for another 2 hours & turned in around 11. 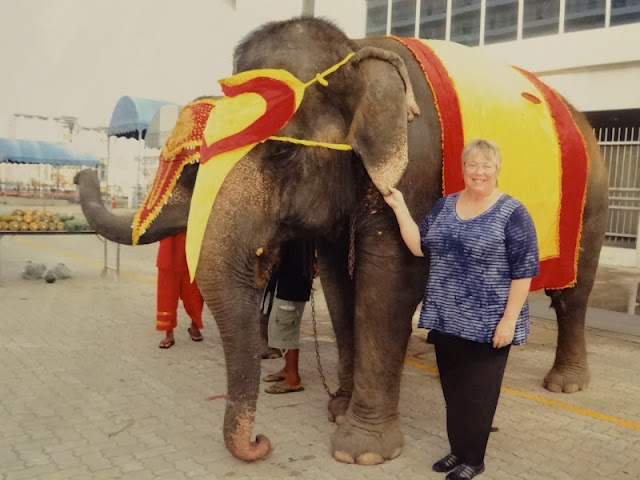 Becky, how happy I am to read your today's post!

Daily I check the blog, and worry everyday as your posting was delayed for many days. I believe you are now in HK and in good health. Hope your feet are getting better.

Enjoy your cruise, and I will enjoy your diaries.
Keep cruzin... !