I woke about 7; & looked outside.  Although we’re still in the South China Sea, the water looks a little more green than blue today.  It’s quite windy.  Watched the morning show; answered a trivia question & won another little souvenir. 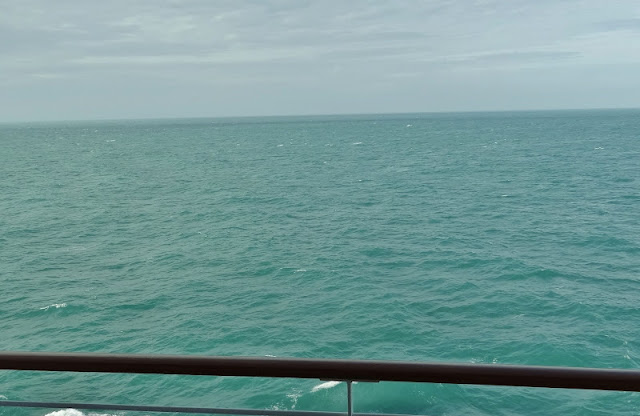 At the Bistro I sat with Celeste & Bill; & we were so busy talking I didn’t get to hear most of what Capt. Glenn had to say this morning.  But what I did hear was his thought for the day….”If you don’t want anyone to find out, simply don’t do it."

Celeste was filling me on everything they did in Phnom Penh the day before.  She said it was brutally hot & a very long 12 hr. day; but it was worth it.  I hope to look at her photos soon; it’ll probably make me regret even more my decision to cancel that tour.  As we were talking, I looked over her shoulder & realized that Hank Aaron & his wife were sitting at the next table.  I admit not knowing the first thing about baseball; but I am in awe of who he is.  I still do a double take when I see a celebrity walking amongst us.  But the most interesting thing about that is, you begin to see them as just ‘people’, not ‘Gods’.


I was a little late; but did make it to the Photoshop class.  I should have stuck with it during the last segment; because now they’ve started teaching the new 10.0 version (& I have 9.0).  But I did learn to do some fun alterations to people pictures (like make someone ‘skinny’).


I did some ‘business’ at the front desk.  Took the passport photos down to Johann to go with my Chinese visa application.  He told me that there are several of us who need visas; & that the Consulate in Hong Kong is setting up appointments so we don’t all arrive at the same time.  I wish we could go together, because I would find comfort in numbers.  Johann THINKS that the port agent will assist us in getting to the Consulate, for a fee I’m sure.  Just like with the meds I’ll be getting from there, the port agent will handle that (for a fee).  Ca-ching, ca-ching!  I also talked with Debbie at Shore Excursions about my tour the first morning in Hong Kong.  We decided that I should cancel & rebook it for the next day since I don’t know when or how long the visa situation is going to take. 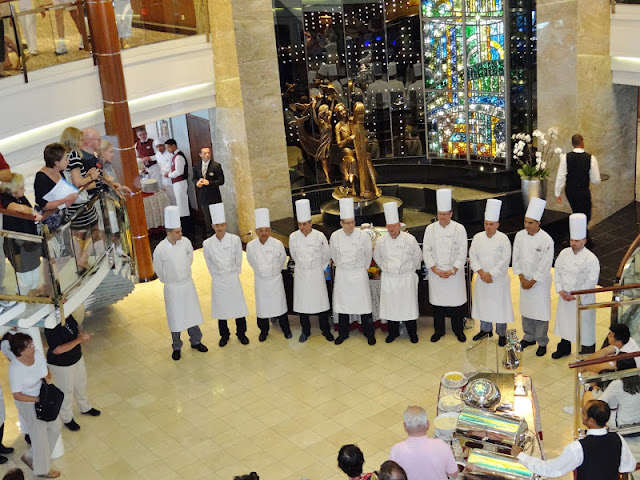 The Cove was a flurry of activity as they were setting up for the Grand Gala Lunch Buffet.  I was able to talk a little while with (waiter) Petar before it got too busy.  Celeste & Bill asked if I wanted to take my plate & eat in the dining room with Hubert Gesser & Karen Dickson (he’s the jewelry designer whose pieces are being featured during this segment).  I very much enjoyed their company & all the jewelry talk.  Karen was wearing the most exquisite diamond necklace & matching chandelier earrings.  I told her I’d kill to go through her ‘jewelry box’.  She laughingly said the entire store is her jewelry box.  I explained to Hubert that I try to avoid going into Facets (onboard jewelry shop) because the last time I went in there, it cost me dearly.  I told him about the big honkin’ rubelite tourmaline & diamond ring that I bought.  He said he'd like to see it; & asked if I would bring it by the shop on the next sea day. 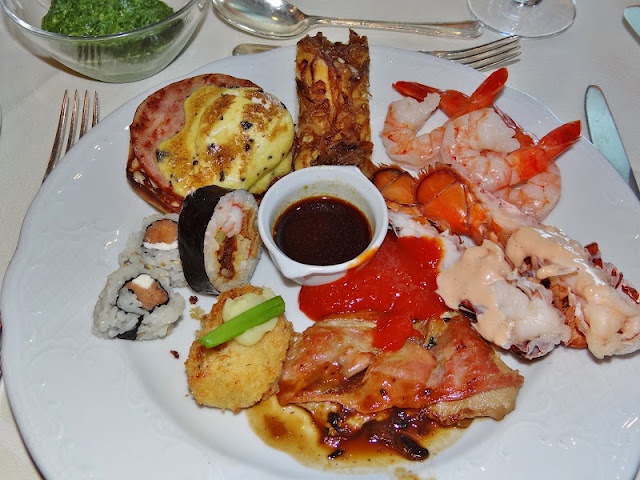 When I got back to the cabin after lunch, there on my bed was a shiny gold box of See’s candy & a note from Elise, welcoming me to the full world cruise.  In a short while, Elise called on the phone to ask about sizes for the WC polo shirt & windbreaker.  And she assured me I would get an iPad.  We had chatted around the ship since the beginning; but I had never properly introduced myself to her.  Once we started talking, she realized who I was.  She obviously wasn’t in a rush because we got to talk about all the changes & new arrangements that needed to be made.  She even advised me on getting an extension on my tax return.  She does it all the time.  She is such the sweetheart; & she’s an excellent choice for World Cruise Hostess. 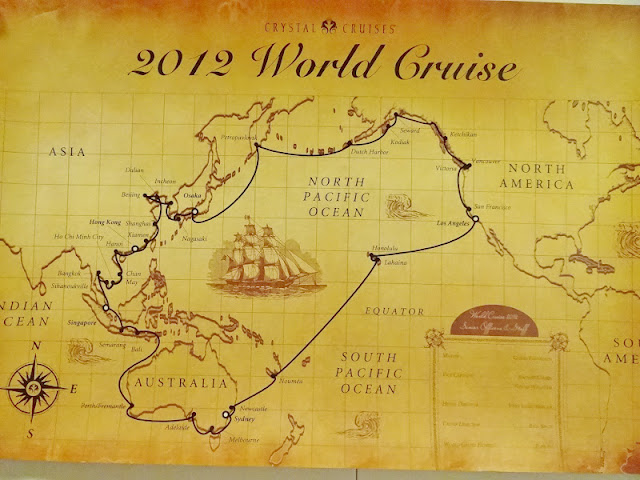 About 6:30 I went down to the front desk to pick up the passengers list for this segment; & to drop off the ticket for the Hong Kong tour that I had canceled. Went up to the Captains Choice shop to buy an emery board (lost mine somewhere); & made a stop at the photo gallery to see if yesterday’s tour photos were up yet.  I was invited to a cocktail party given by the hosts for the Signature Travel Network; but I did not go (again).  I took a ‘water pill’ a few hours earlier, which makes the next 4 hours or so ‘iffy’. 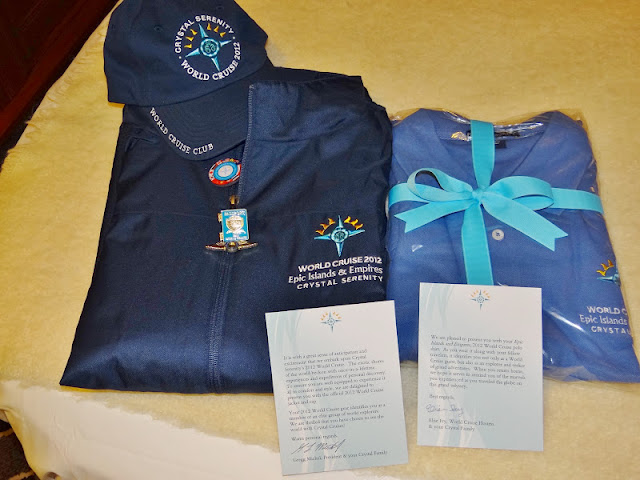 When I got back ‘home’, Santa (Liz) was laying out my presents on the bed.  It was better than Christmas morning.  Elise got the sizing just right for my jacket, shirt & the (1 size fits all) baseball cap.  I got a very nice antique looking world map of our voyage.  There were a few jewelry & magnet items.  But there, wrapped in blue paper with a ribbon on it was THE big present.  Fortunately it came with a nice sized book, “iPad 2 for Beginners”; which I hope to have time to read some day.  If they are still offering iPad classes at the C.U., I will sign up for them.  All I could do tonight was plug it in to charge it. 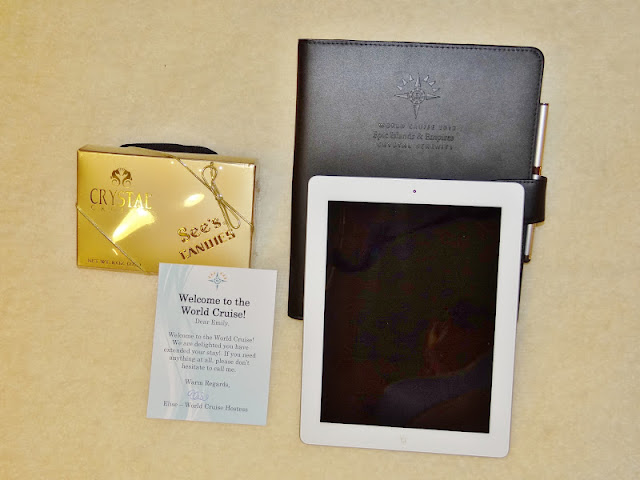 I did manage to get some ‘work’ done.  Liz came in about 8:30 with my dinner; one of the best overall dinners I’ve had the whole cruise.  It started with warm corn flan with a fondue sauce made of fontina cheese & black truffle.  To die for! 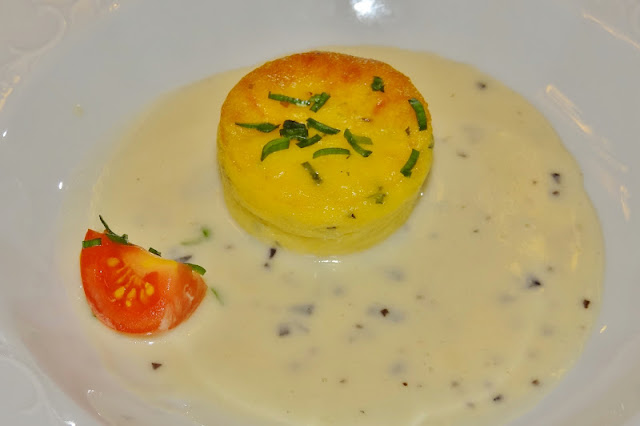 Next I had a green salad with sun dried tomatoes, toasted garlic chips & boiled eggs with a roasted shallot dressing.  Yum!! 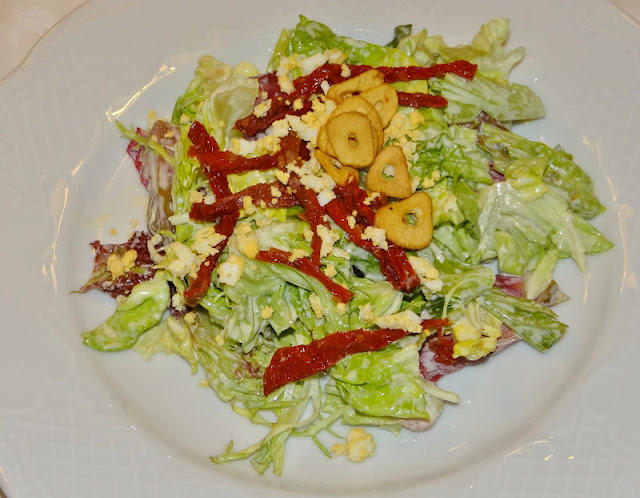 My main course was braised beef short ribs.  I would say falling off the bone tender; but they had no bones.  It was served with a chianti sauce, sitting on a bed of chive polenta & baby bok choy.  Totally outstanding meal. 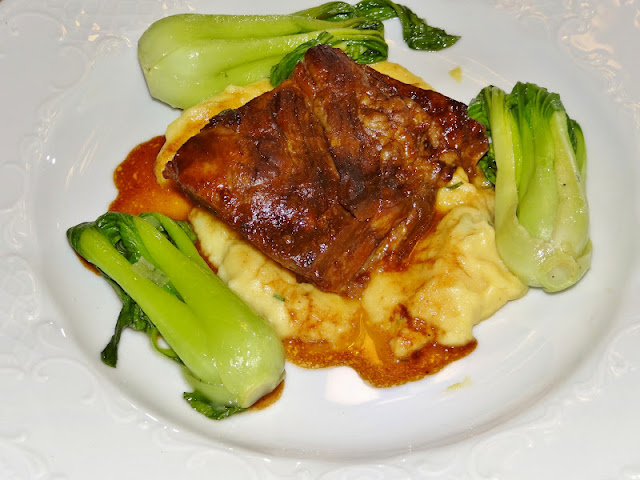 I worked on the computer til about midnight.  Even though tomorrow’s a port day, fortunately we don’t arrive until late morning.  There is a wonderful vibration, gentle rocking of the ship tonight; & it should make for a wonderful night’s sleep.