I woke about 7:15.  A quick look outside, very foggy…..the can’t see your hand in front of your face kind of fog.  I decided to go up to the Lido & fix a breakfast type sandwich to take with me on the bus since it was a little too early for breakfast.  I spoke briefly with Peggy & Elaine.  Went back to the cabin & picked up an umbrella & my jacket since I wasn’t sure what it was going to be like the rest of the day. 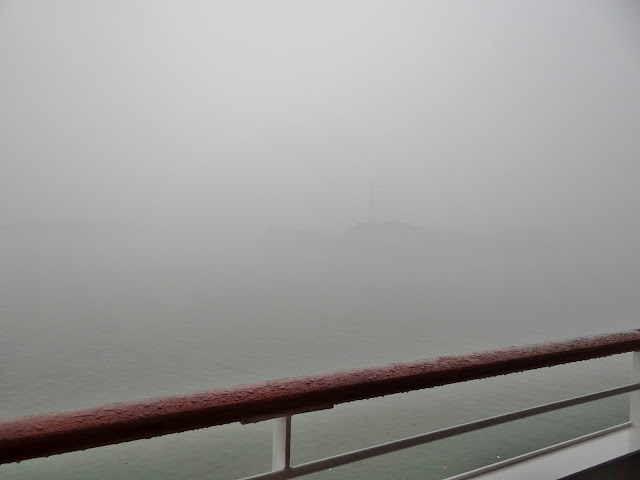 I signed up for the shorter Panoramic Xiamen tour (XMN-AW).  We were required to go through immigration, get our temperature taken, & then return our passports back to the ship’s personnel.  We were to retain a stamped photocopy of our passport & carry it with us each time we went ashore in a Chinese port.  The international cruise terminal in Xiamen is beautiful & HUGE; it felt like a walk of half a mile from the gangway to the exit.  They seemed to take their sweet time in processing us; & it made the start of the tour about half an hour late. 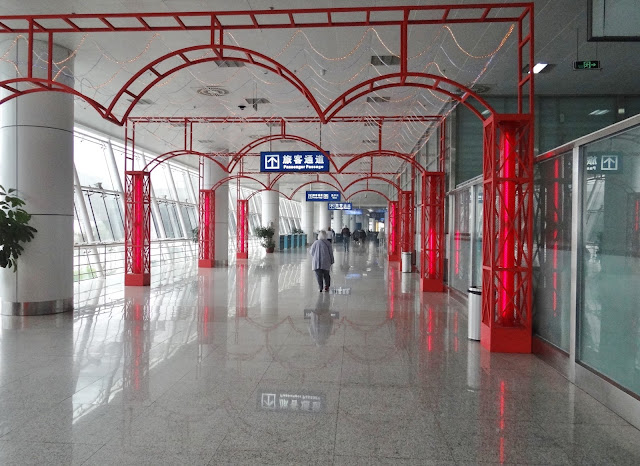 Anyway, I chose bus #3; & Mama Gaye was onboard too.  Our guide was Helen; & she had an assistant named Ellen.  Xiamen (pronounced SEE-a-man) is quite a large city with about 3.5 million people.  It’s always been an important exportation point for tea; home to several universities & boasts some rather attractive beaches. 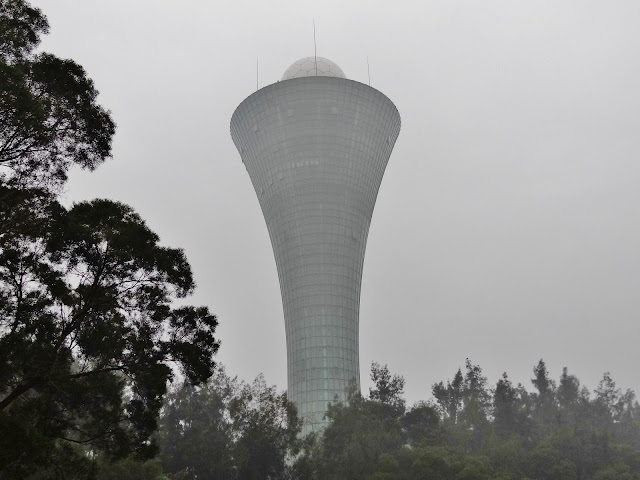 Our first stop was a scenic vantage point called Huwei Hill.  With the fog there was no real view of the cityscape; but the large weather station & tower up there was noteworthy.  Helen talked a bit about the cost of real estate ($3k per sq. meter); so that reinforces the custom of the multigenerational family home which is common throughout Asia.  Young people can’t afford to leave the family home; so they usually stay until they decide to marry.  The lucky few who do leave home, typically must share an apartment with up to 6-7 other people just to make their rent. 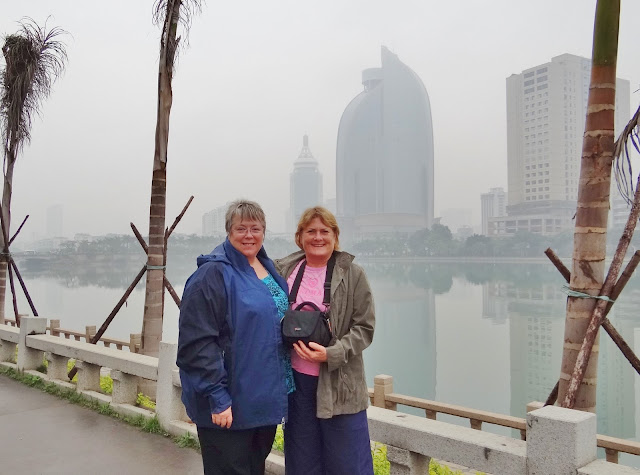 Our next stop was a drizzly walk through Bailuzhou Park, a tranquil setting that has a lovely view of the city skyline, where locals congregate when the weather is nice.  Even though it was misting rain, the reflections of the tall buildings in the lake were very beautiful.  The architecture of the skyline ranges from traditional, European, contemporary to rather futuristic. 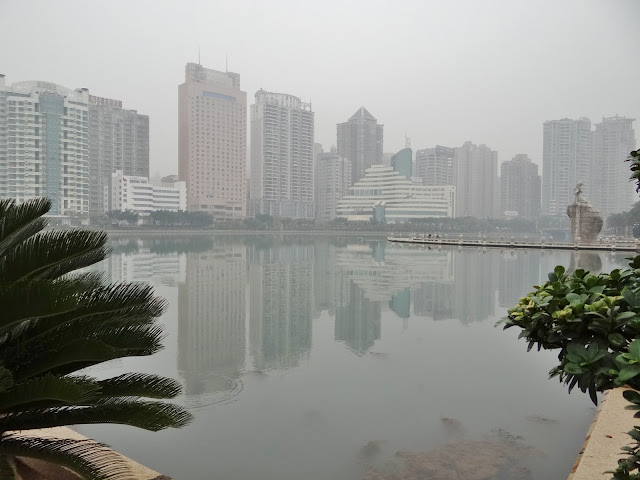 There are groups of stone sculptures on a large grassy area that butts up next to the park’s lake.  The egret is the city’s official symbol; & they incorporate the wading bird into lots of signs & logos around the city.  Atop a large marble ‘rock’ in the middle of the lake is a sculpture of the Egret Goddess. 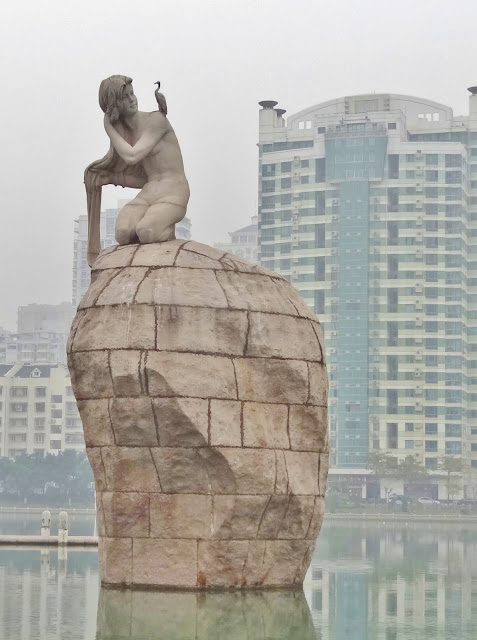 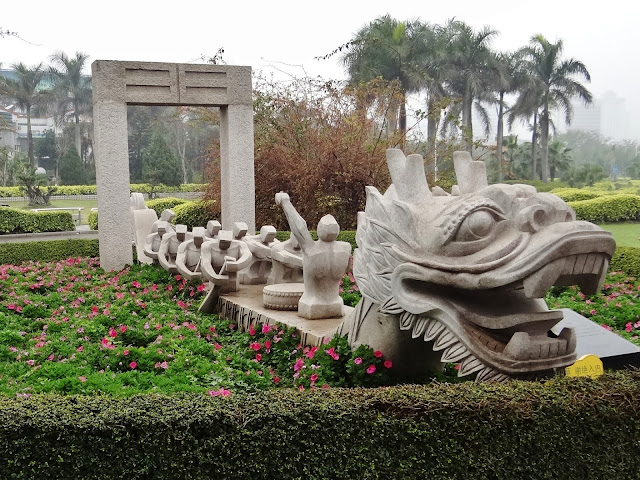 A short drive took us along the beaches & to a beachside park where music festivals are held.  We drove past areas of public housing, mid-rise buildings that were very well maintained & some rather luxurious modern apartment buildings that enjoyed beautiful sea views. 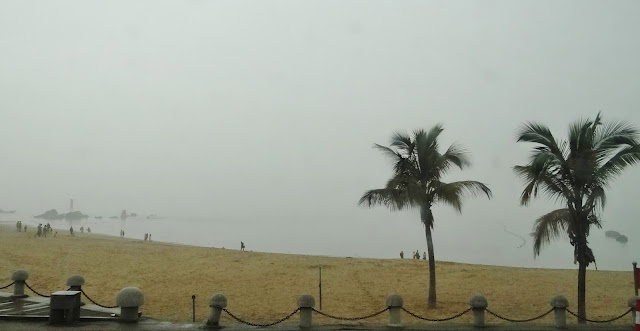 As we made our way to the heart of town, they parked the bus close to a pedestrian only shopping district.  We weren’t given much time for shopping; but we did walk past a rather modern, fancy multi-story mall with the obligatory Starbuck’s in the ground floor.  Some of us visited the ATM for Chinese yuans.  We then proceeded to look around a bit at the local market area (which by the way, sports a KFC, McDonalds & even a Wal-Mart, WHO KNEW?).  Mama Gaye was looking for a watch battery; but even the guide’s assistant couldn’t help her find one up & down that busy street. 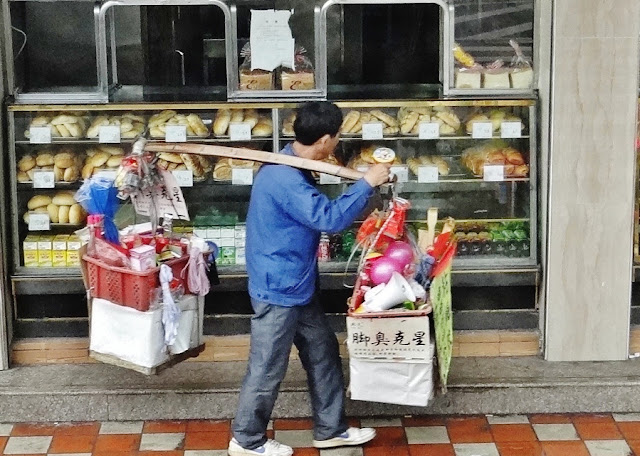 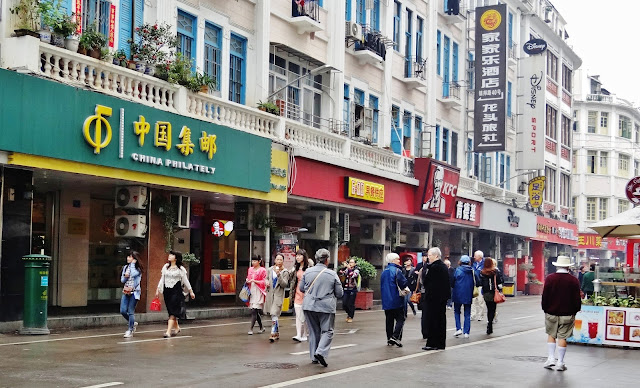 We were brought back to the ship about 12:30; & I proceeded up to the Lido for lunch.  I recognized a voice; & I turned to see Regis Philbin & his wife, Joy about to go through the buffet line.  Not wanting to intrude, I just quickly said how excited we were to have him onboard & that we looked forward to his talks.


There were a lot of good things on the menu; & I took a small taste of most of them.  I fixed a small mixed salad, hearts of palm & prawns (of course), Mustard & tarragon marinated sirloin with horseradish hollandaise sauce, perch with red capsicum beurre blanc sauce, veal meatballs with a creamy caper sauce, sautéed potatoes with onions & miushrooms. 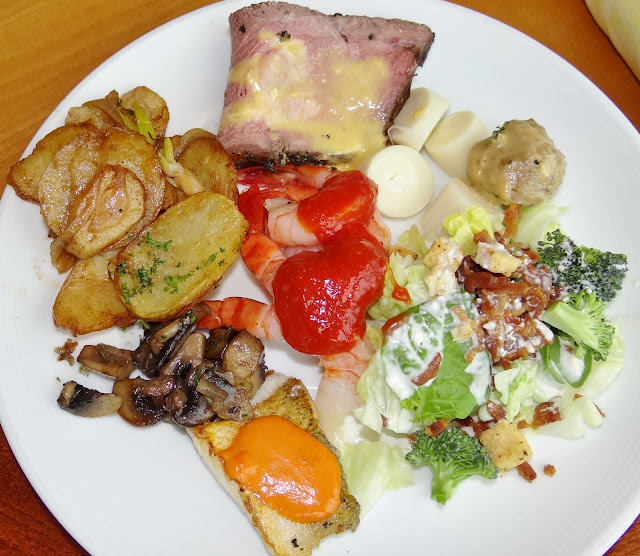 Chuck was over on the port side working on his stone carving; so I stood & talked with him a short while.  That man’s got one wild sense of humor; but we ‘click’ & enjoy lots of laughs while trading barbs. 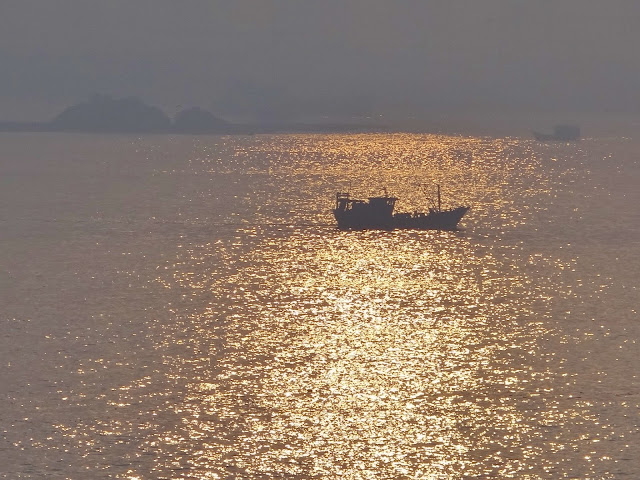 I went home & put those ever swelling legs up; & of course, fell asleep.  When I woke in the late afternoon, the sun was trying to come through the fog.  It cast a golden beam of light on the water & on the side of the terminal building.  I took some photos prior to & during sailaway.  We were supposed to depart at 6; but harbor traffic was backed up & we had to wait our turn.  By then it had gotten dark enough that the buildings were illuminated; & some of them put on their own special ‘light show’.  Although the photos don’t show it, building lights changed on a cycle & some even ‘crawled’ with changing colors. 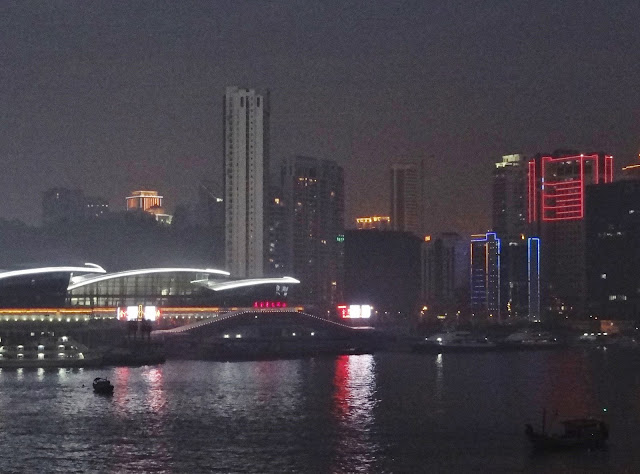 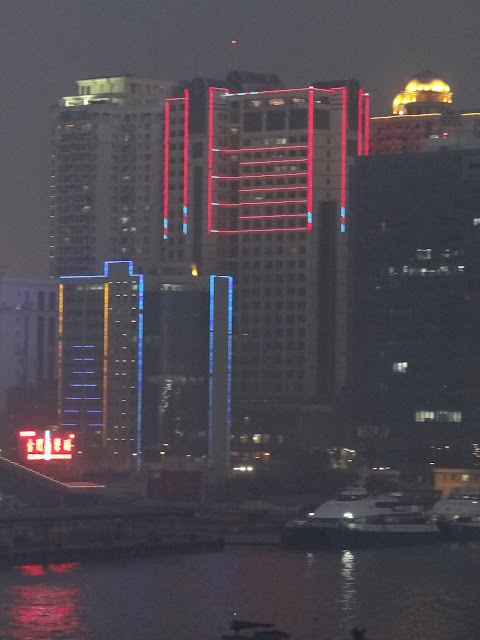 I worked on photos until Liz brought my dinner about 9.  I had a great appetizer of poached asparagus with heirloom tomatoes in vinaigrette. 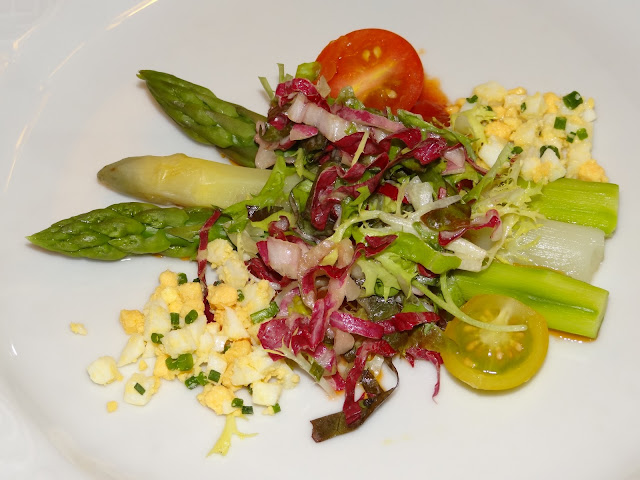 My veal scallopini with prosciutto was a little bit overdone (but still very tasty).  It came with capellini pasta.  I had a side order of wilted spinach with cauliflower puree. 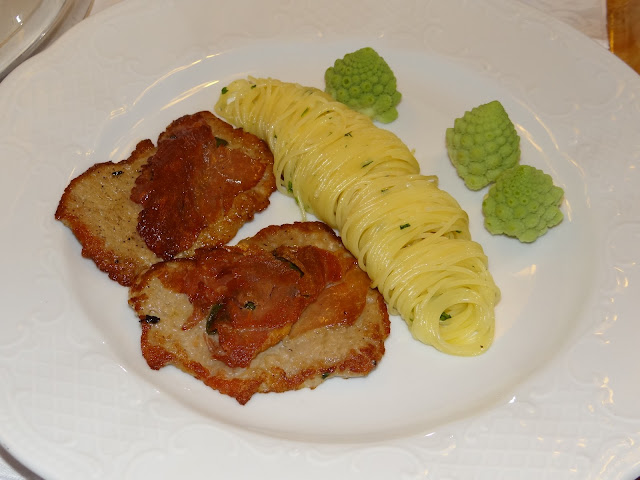 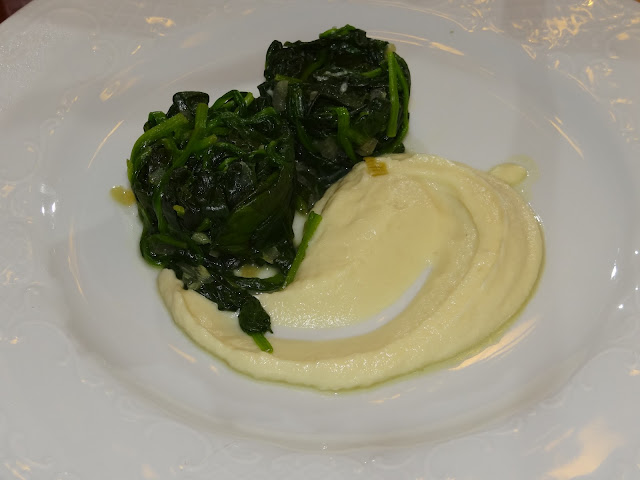 It wasn’t easy; but I did manage to stay ‘up’ to attend the “Lucky Fortune Fair” from 9-11 around the Neptune Pool on Lido deck.  All the tables, sofas, etc had been removed; a floor put over the pool; & the whole deck was decorated in an Oriental motif & set up like a county fair. 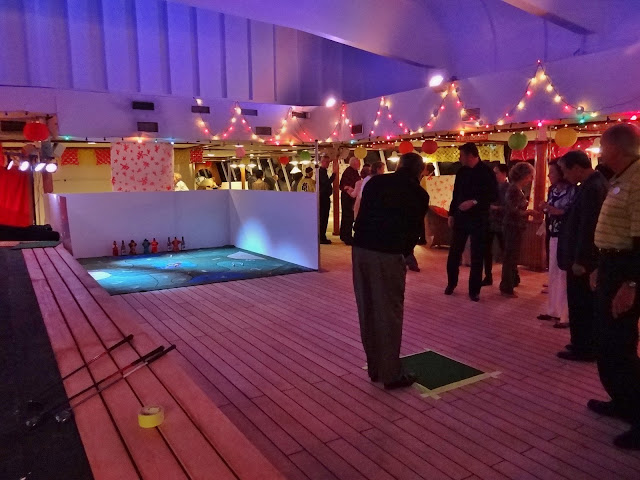 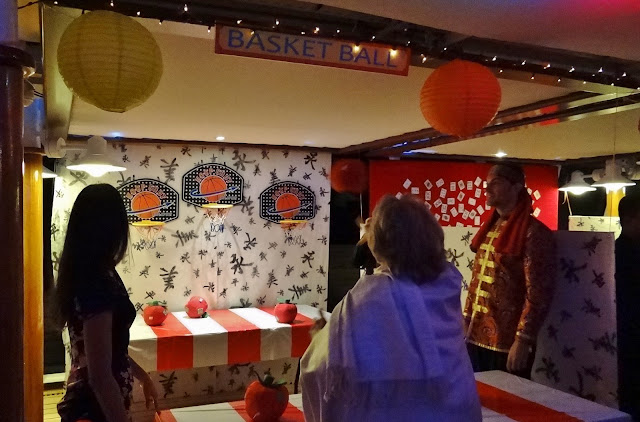 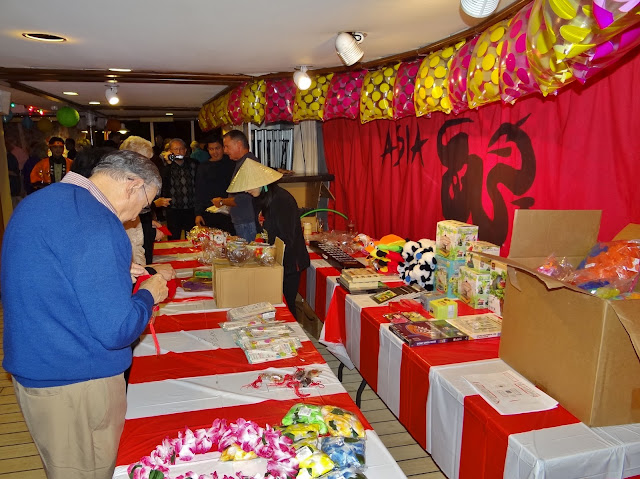 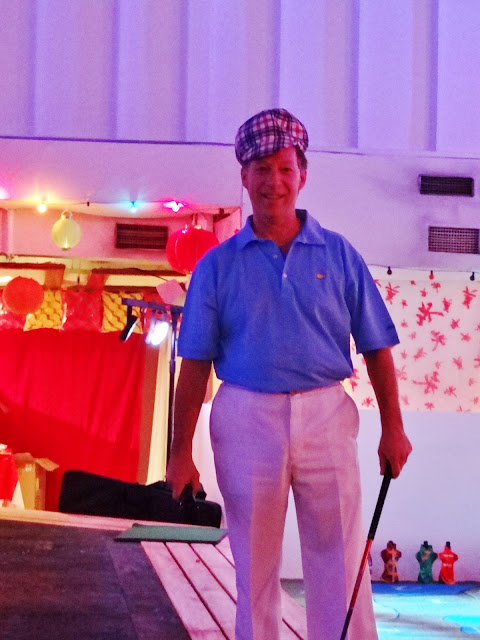 Although I didn’t know who it was at the time, Lianne (photographer) was dressed as the lucky Chinese panda dolling out the most awesome (caramel dipped, homemade) fortune cookies. 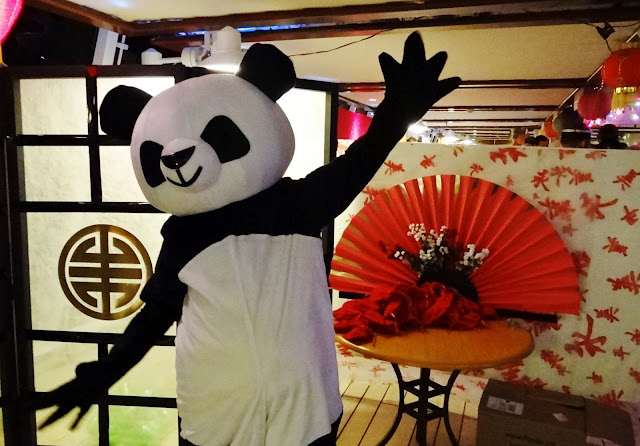 And close to the end of the evening, the officers & some of the entertainment staff took their hits in the dunking chair. 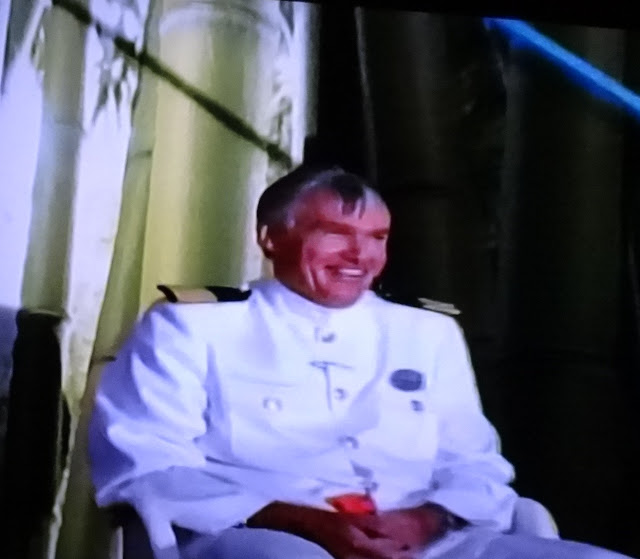 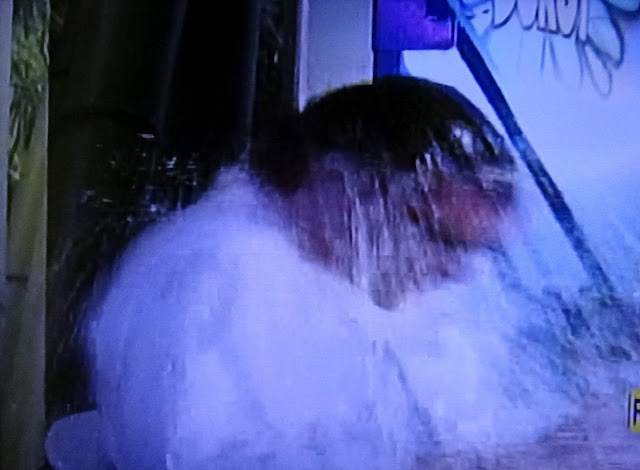 The staff obviously put a lot of thought into planning this event; & it was one big undertaking to clear out the pool deck & set all this up for just a few short hours of enjoyment.  It gave us all a chance to let our hair down & act like a kid for a little while.  It was one long day; & I’m looking forward to a good sleep & a relaxing sea day tomorrow.