I had the alarm set for 6:45; & I awoke feeling very sluggish.  So relieved that I got everything accounted for & packed last night.  I was on my way down to breakfast at 7:15.  Our breakfast buffet was set up in a private banquet hall down on the arcade (mall) level.  A beautifully dressed young Chinese woman stood at the bottom of the escalators.  And from there uniformed Crystal representatives lined up about every 10’, leading the way into the dining room.  They were there to see us off in grand style; very impressive at this unGodly hour. 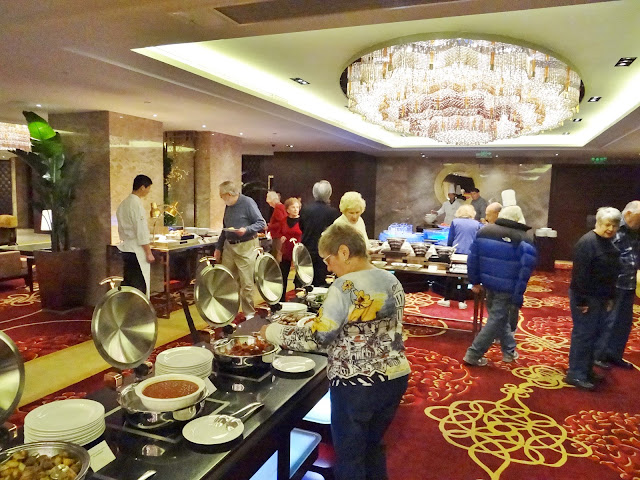 I was surprised to run into Celeste & Bill there; hadn’t seen them in 3 days. (They had hired their own driver & guide, which made it easier with Celeste’s mobility issues.)  I downed some scrambled eggs, bacon & roasted potatoes while we chatted about our separate adventures. There was a cloudless blue sky; but it was frigid cold when I got on the bus at 8:15.  They had scheduled 9 buses to leave at 8:30.  The other 6 would leave at 9. 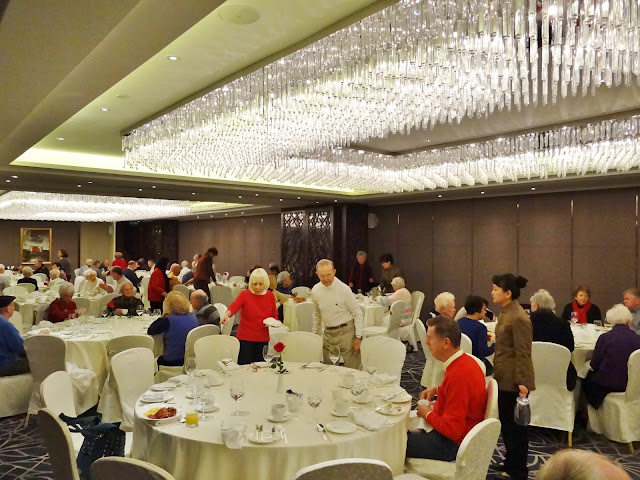 First on the agenda....Tiantan Park to visit the Temple of Heaven.  As the bus pulled into the park gate, there was a sea of bicycles & scooters parked outside.  I soon realized that this is THE place to be in the early mornings. The bus dropped us off in a large parking lot; & the first thing that caught my eye was a young woman picking up trash/debris using large wooden tongs. Certainly there is an easier way! 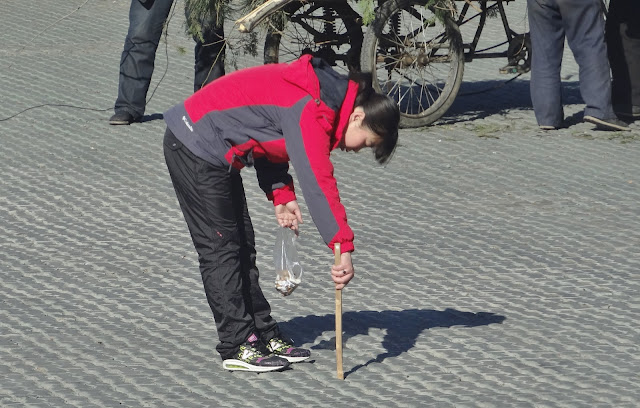 We followed a paved walkway that meandered around this huge grassy park area.  Today Dwight & Raphael took turns holding the #3 paddle way up high so we could stay together (like ‘sticky rice’).  There were groups of people in various areas all participating in different exercise rituals.  Some were in long vertical rows, practicing the graceful art of tai chi to (what I would call) Chinese spa music.  They encouraged our group to join in; & a few did. 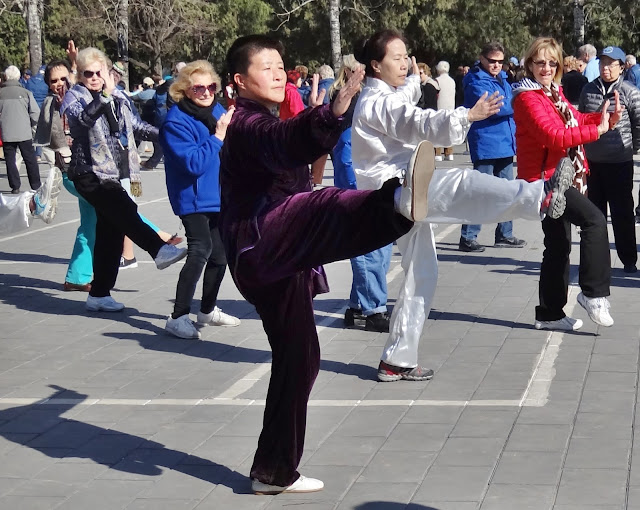 Another group of mostly older folks were doing something that looked like tai chi movements; but they were holding swords.  The look of concentration & peace on their faces was a beautiful sight. 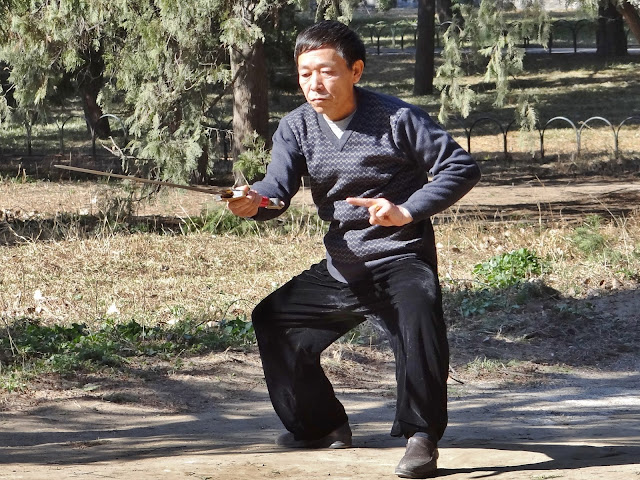 There was a large group sitting on short stools under a shade tree listening to a Buddhist ‘sermon’.  A short distance away was another group that were being led in song by a very emotional (preacher-looking) gentleman. 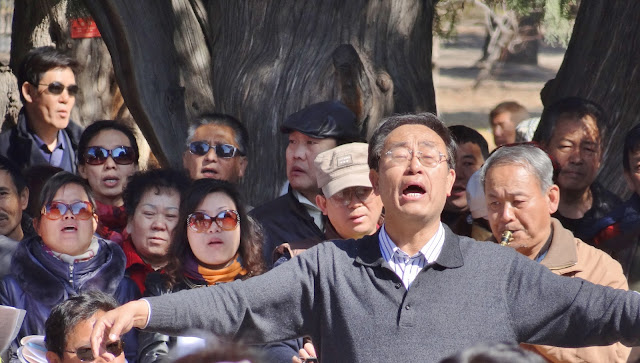 Finally we worked our way through the park area & approached the Gate of Prayer For Good Harvest, leading to the Hall of Prayer for the Good Harvest.  The green roof, lacquered wood panels & gold leaf adorning the Gate was as extravagant as it was at the Forbidden City. 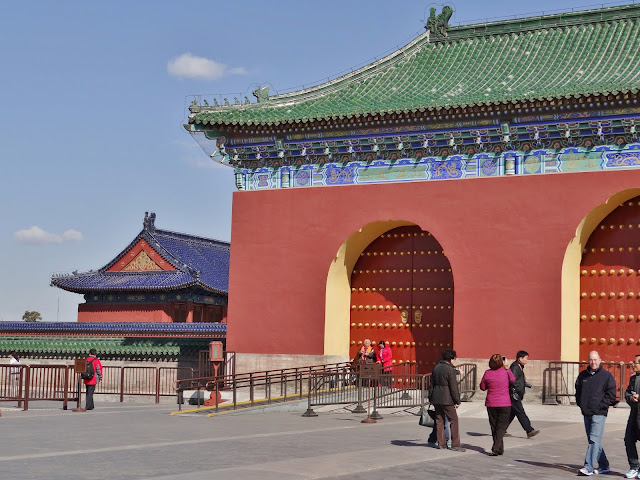 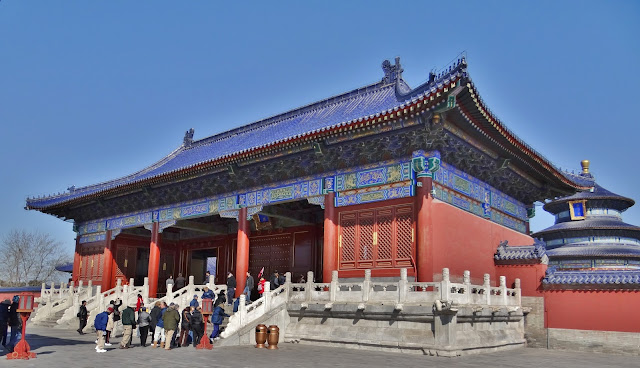 The Temple was built in 1420, entirely of wood.  Its purpose was to provide a place for the emperors of the Ming & Qing dynasties to worship Heaven & offer sacrifices to the Gods for rain & plentiful crops. The intricately painted detail just below the blue tiled roof was simply spectacular against that blue sky backdrop. 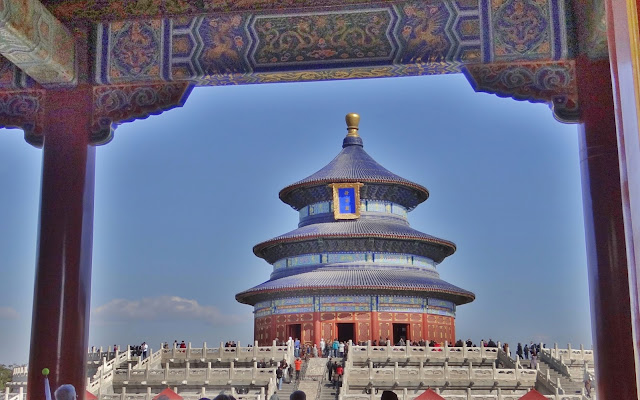 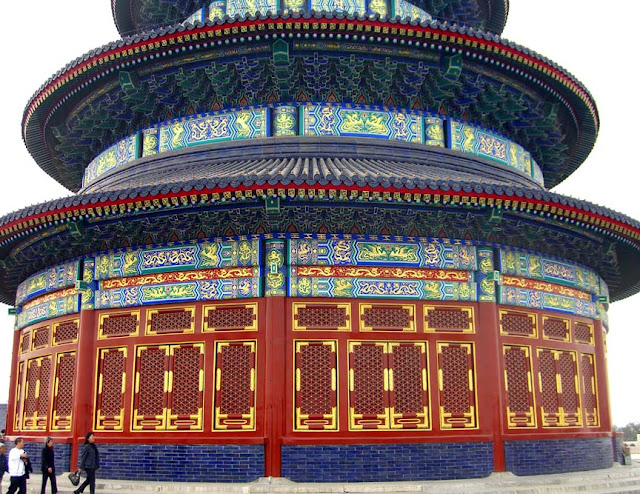 The twin set of stairs leading up the 3 tiered terraces were separated by long slabs of bas relief marble (also similar to the Forbidden City).  I was studying the carvings when someone tapped me on my shoulder.  It was Jelena, who was escorting a group from another bus.  We just had a few minutes to snap a quick photo before she had to catch up with her group. 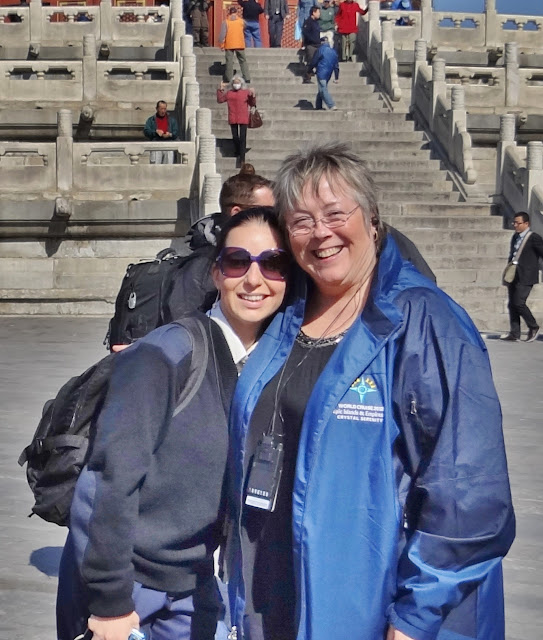 I then trudged up the steps to take a look inside.  Wow, the brightly colored lacquer work took my breath away.  I just stood there with my mouth open forever.  Not wanting to get lost, I snapped photos & dashed back down. 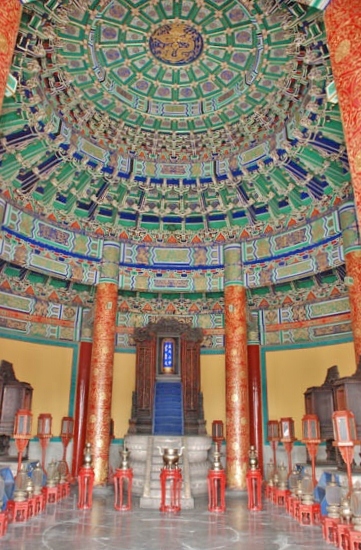 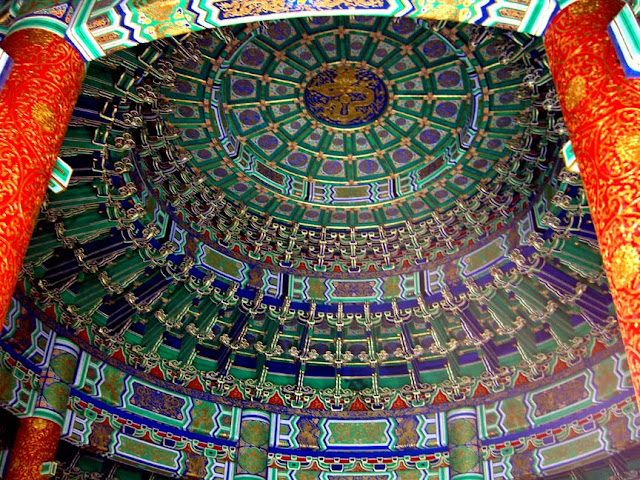 Since we had Jeff (the videographer) with our group, it seemed like we lingered longer than other groups.  While we were standing around waiting for him to wrap up his shoot, he came up with the idea of making some of us stand in a line in front of the Temple & turn in unison.  First to the left, then to the right.  We would find out later that this would turn up on the world cruise video (in fast motion)...making Rick, Mama Lea, me & about 7 others look like fools.  All in good fun though. 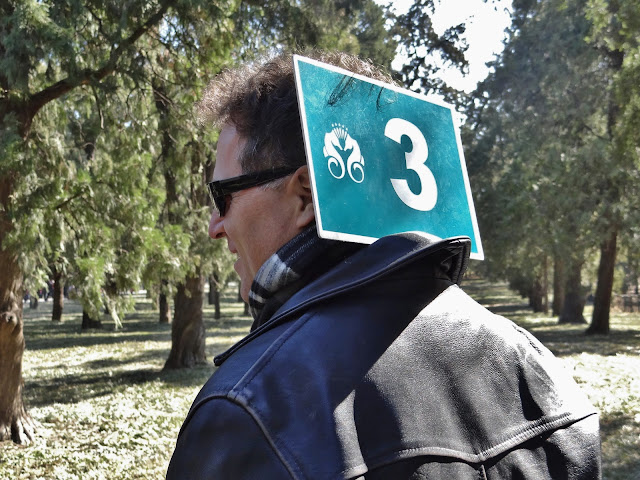 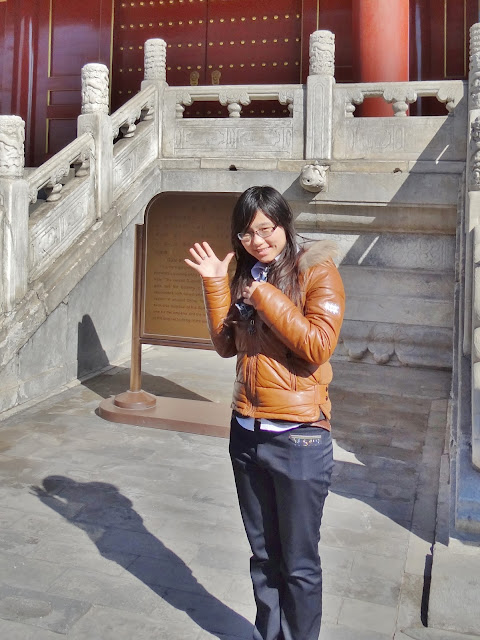 When we were starting our walk back toward the bus, our route took us down several of the ‘long corridors’.  These are covered walkways with raised ledges on either side, where hundreds upon hundreds of people socialize daily. You’d see several gentlemen straddling the railing playing a form of Chinese checkers or dominoes.  Some were playing cards; some mahjong.  Women would be in groups knitting. 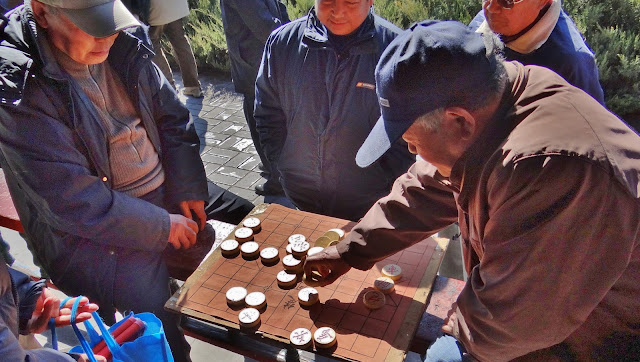 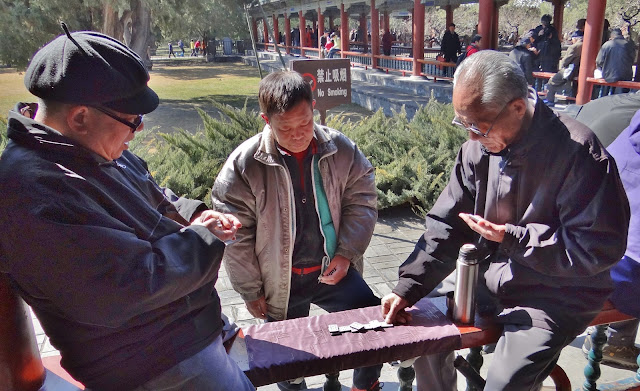 There were parents with the most adorable children.  They were feeding them or blowing bubbles for them to chase on the lawn.  Some of the elderly just sat there as if in quiet contemplation.  Another one of those surreal moments I keep talking about.  So exotic, yet peaceful & normal. 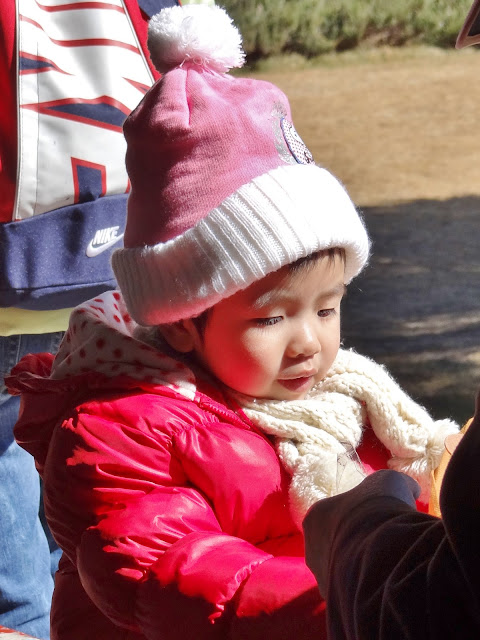 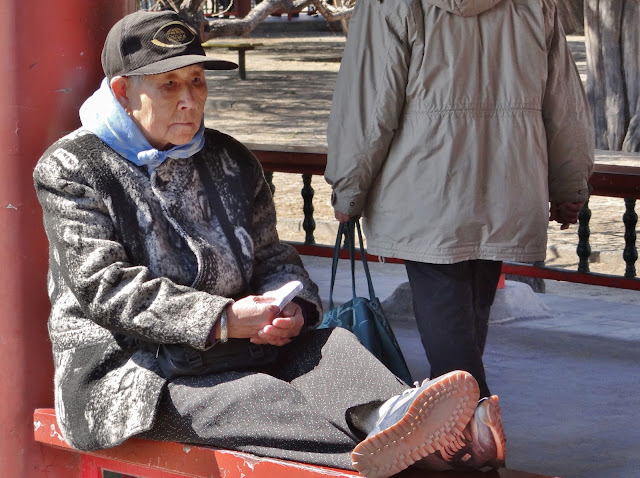 It was approaching 11:30 when we boarded the bus.  Our last stop in Beijing was on our way out of town for lunch at the Kempinski Hotel. 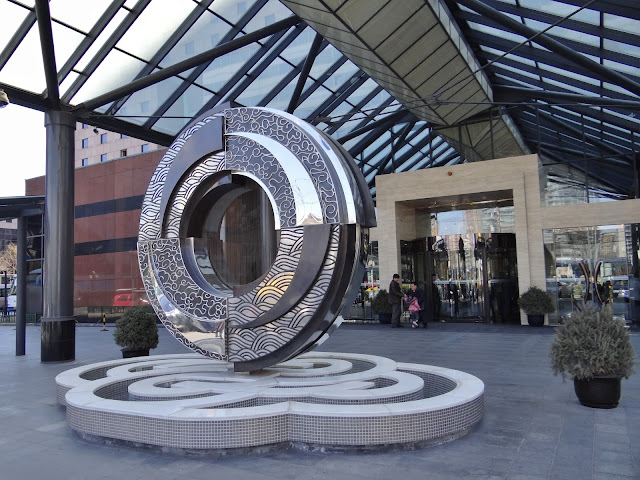 The beautiful Jade Ballroom was set up with a lavish buffet & probably 75 large round table dressed in white.  The serving line was quite long & people were beginning to get a little testy.  So, I did not butt in to take photos of the buffet.  Everything I had was outstanding.  Prosciutto, potato salad, a spicy vegetable stir fry, a cold cellophane noodle salad, fried rice, sweet & sour chicken, bok choy & egg foo young. 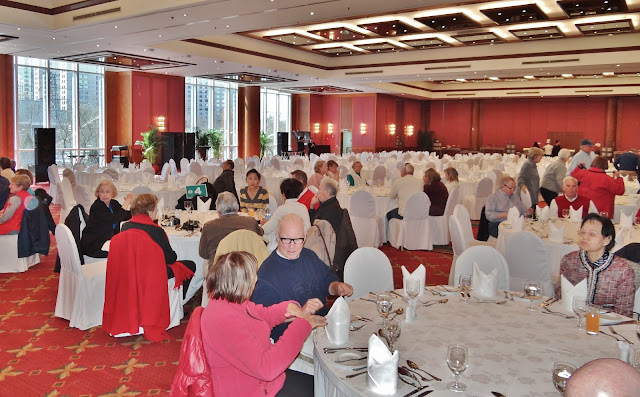 Before we started our long ride back to the ship, we all made a happy stop.
I was mesmerized by a crystal ‘raindrop’ mobile that cascaded down a stairwell above the atrium. 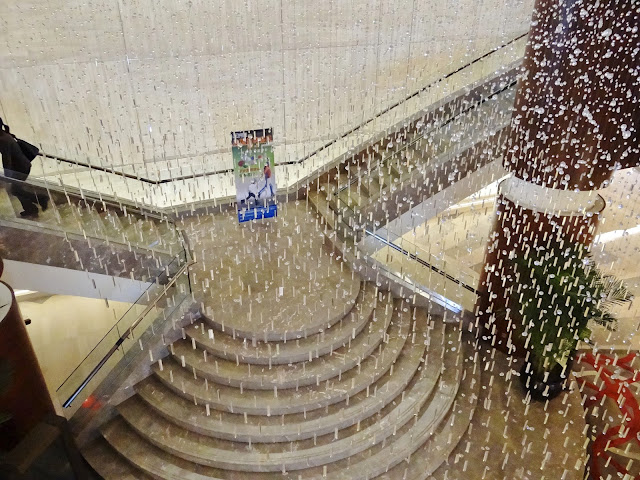 Being well fed & toileted, we climbed back on the bus one last time about 12:45.  We noticed that Rose wasn’t on the bus.  Joy said she was being picked up here; & wouldn’t be accompanying us back to the pier. We all wanted to give Rose some type of tip, so Joy got off to find her & brought her back so we could thank her properly.  Rose’s job was to be more of an assistant to Joy.  But she did a lot of nice things for most of us & helped Joy keep track of those who wandered away.  They were both fabulous companions for these 3 days.

I think everyone was tired, so Joy didn’t talk on the ride back.  Everyone pretty much slept.  I stayed awake until we got out of the city.  The last thing I noticed was what appeared to be nuclear power plants. 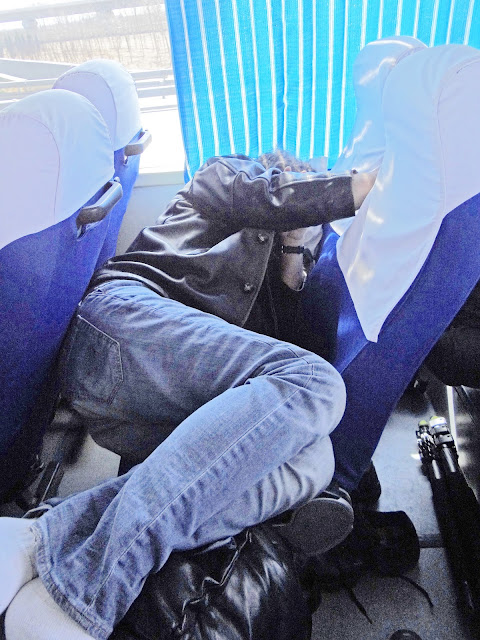 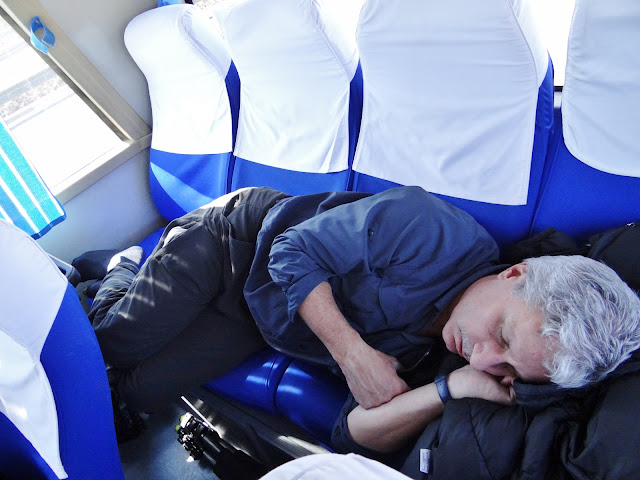 We were back to the ship a little after 3pm.  I unpacked & laid down on the bed.  Couldn’t believe it when I woke up, 3 hours had passed.  We were supposed to set sail at 6; but those same Chinese officials that held us up 3 days ago, were having more trouble with paperwork.  We weren’t allowed to leave until 7.

Lizzie brought dinner at 8.  She excitedly told me about her trip to the Great Wall the day before; & I filled her in on all the stuff the Passengers had been doing.  The appetizers looked so good on tonight’s menu, I could barely narrow it down to two.  First was crostini topped with prosciutto, heirloom tomato confit, parmesan cheese shavings & greens drizzled with truffle honey.  Outstanding! 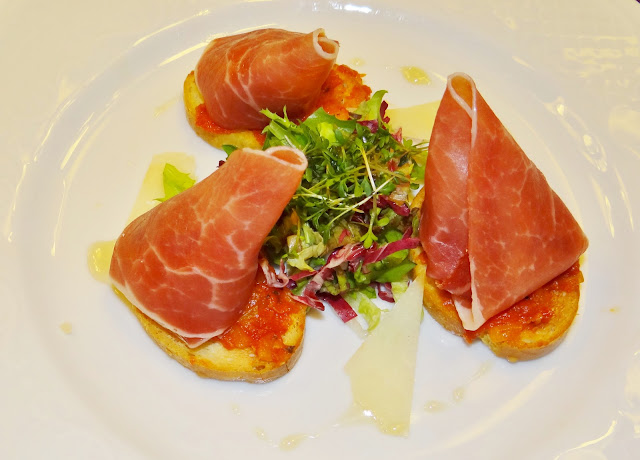 My next appetizer course was a fabulous Greek salad. 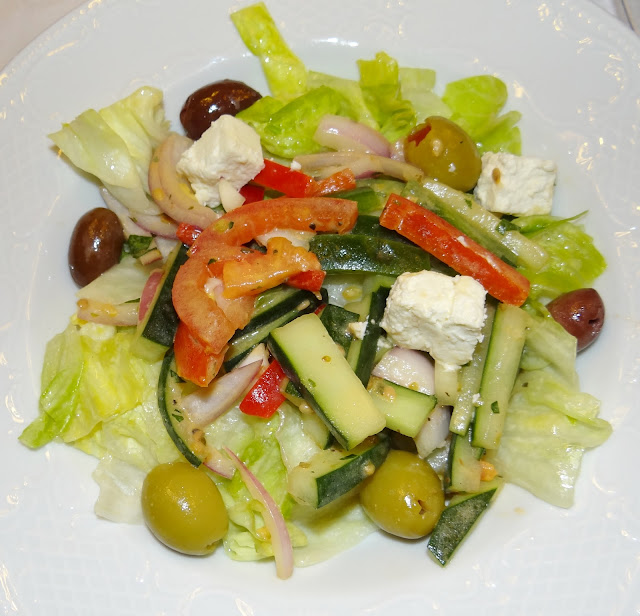 For my main course I had herb crusted cod with pommery mustard beurre blanc sauce, steamed rice & asparagus.  The cod was thick & ‘meaty’; & the herb crust gave it such a wonderful flavor.  I was stuffed; & knew I would have no trouble getting back to sleep.  It felt so good to be back in ‘my’ own bed & a rocking ship. 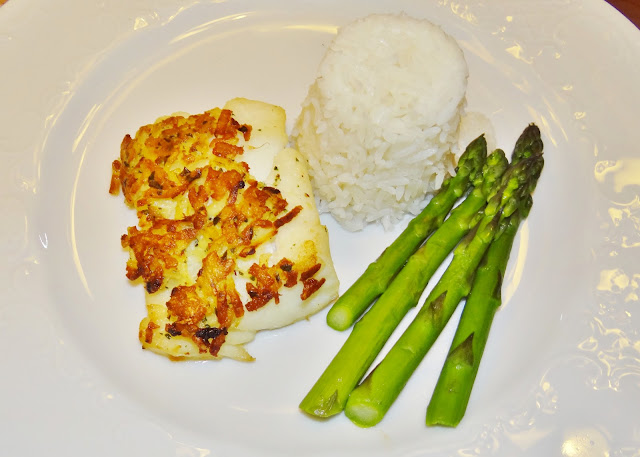 Parting thoughts:  High praise should go to James Coughlan (Shore Ex Mgr) & his entire staff for putting this 3 day overland excursion together. The logistics of arranging transportation, lodging, dining, tours & guides for over 700 guests must have taken Herculean effort.  The only venue that could accommodate everyone at one time was the Great Hall of the People for the big banquet on Friday night.  The sightseeing excursions had to be timed & staggered so as not to dump everyone there on the same day.  While the World Cruise Passengers were blessed with fabulous accommodations at the China World Hotel, the rest were put up in grand style at the Peninsula.  The two groups were served lunches at different, but equally outstanding, restaurants.  In addition to handling all this for the Serenity’s passengers, Shore Ex also made arrangements for half of the ship’s crew to take a full day’s tour into Beijing on Thursday; the other half going on Friday.  With the exception of our bus tire fiasco, the Beijing overland program was executed flawlessly.  Great job James, Debbie, Jelena, Darko & Daniel! 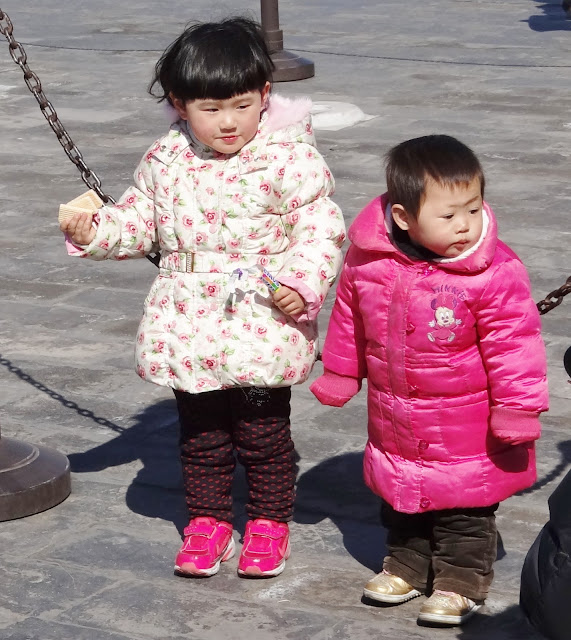 You take such wonderful pictures!! Again, thank you so much for sharing your wonderful trip with all of us. I feel like I know you and hope we meet someday -- on Crystal!! Janet