I slept like a baby; & could barely wake up enough to comprehend what Capt. Glenn was saying in his morning report from the bridge.  He started out by saying, “If you’ve looked outside, you’re seeing the same as me, except I have radar”.  We began sailing in dense, ‘pea soup’ fog about 2:30 am.  And since there is no wind, there’s nothing to blow it away.  It was 57* at 9 am; we’re cruising at 21 knots on 3 of the 6 engines.  During the day we will be sailing in the East China Sea; & then up the Shanghai River those last 5 hours prior to our arrival in port.  Capt’s thought for the day:  “You are who you are when nobody is looking at you.”

Today is St. Patrick’s Day; & since I hadn’t planned to be onboard, I didn’t have anything green to wear.  So, I improvised; & made a ‘kiss me I’m Irish’ badge using the green metallic fish pin from one my tours a few weeks ago.  For those who planned ahead; there was a lot of green on display today.  I got to the Bistro about 10:15.  Celeste & Bill arrived later; & sat with me.  We all knew today was Pat’s birthday; so we were ready to sing when she walked in. 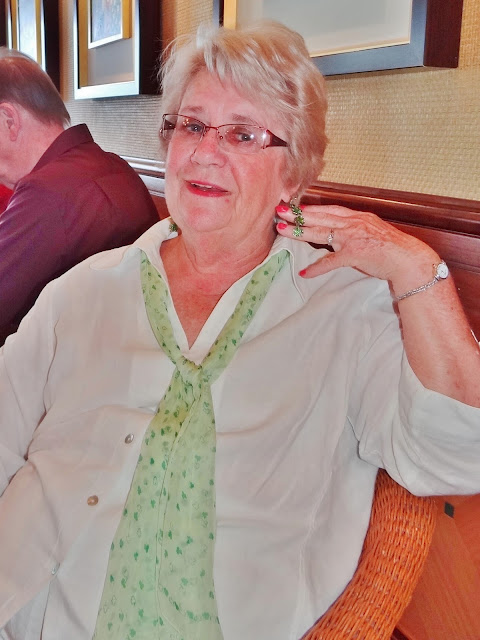 Debbie & Mama Gaye sat at the next table having an early lunch together.  So, we had lots of different conversations going on amongst the tables at the back of the Bistro.  Gaye was feeling a little queasy with the ship rocking a bit this morning.

Celeste & I went down to Shore Ex to books tours for Busan/Pusan & JeJu.  Debbie & Jelena were there; & we were all in a playful mood.  While Celeste was talking to them, I was standing next to this huge arrangement of tulips.  I realized that one was near my ear & the other beside my mouth.  I had a momentary flashback of the old fashioned wall mounted ‘crank’ telephone.  I couldn’t help myself. 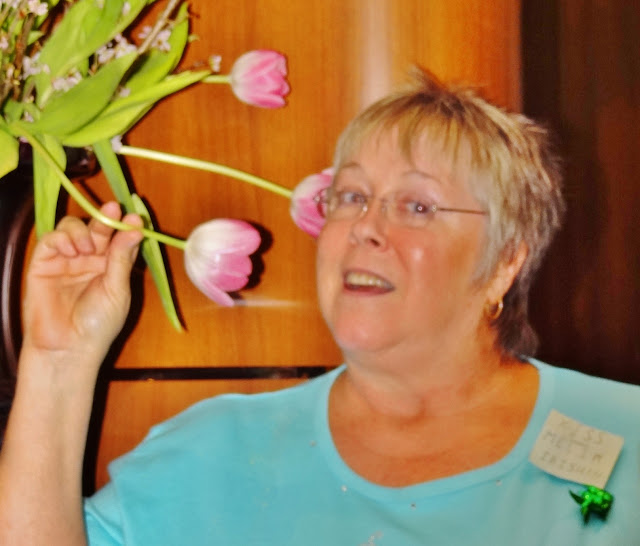 When Bill got ready for lunch, he found us down in the Cove; & we all ate lunch together in the dining room.  We sat at Petar’s table; & had an excellent St. Paddy’s Day menu.  I had the corned beef & cabbage strudel with grain mustard sauce.  It was sooooo wonderful; I asked Giuseppe if I could have it for dinner tonight too.  No problem! 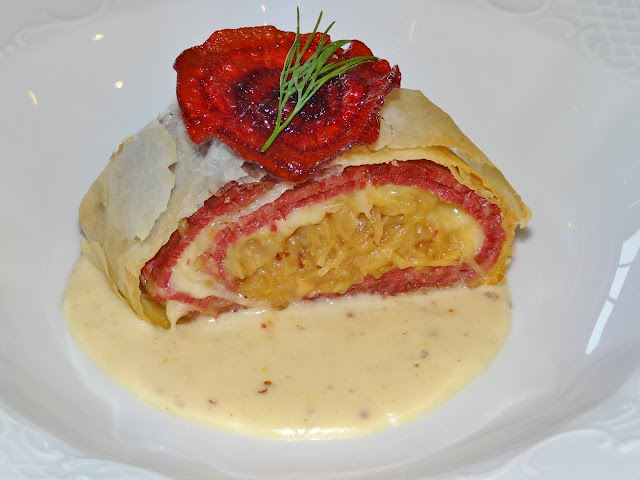 For my next course I had the Irish potato soup with sausages.  Also excellent. 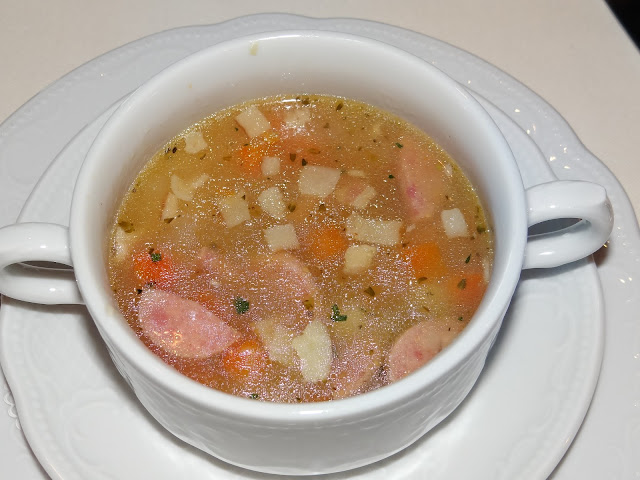 Staying true to the theme, my main course was beer battered cod with cole slaw & onion rings.  Had apricot sherbet for dessert. 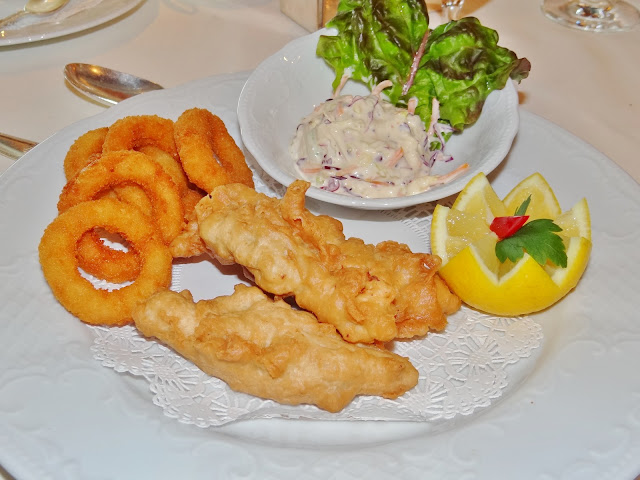 During lunch I mulled over my tour choices for Shanghai.  So afterward, I went back to Shore Ex; & booked a tour for day 2.  The entire staff was at the desk; & I extended an invite to have all of them join me for dinner on the next formal night.  Normally, you can’t invite more than 4 staff members at a time; but we’re going to ask for Josef’s approval since I wanted the whole department to come & there are only 5 of them.  Formal nights are the only nights the staff is allowed to eat in either of the specialty restaurants.  Everyone seemed to prefer Prego; so I called for a reservation.  The operator said they were full; but I kind of doubted that.  So, I went down there in person a few hours later; & booked it with Antonio.  He told me that because I was asking for a table for 9; the operator isn’t able to confirm such a large group.  I wanted Mama Gaye, Bill & Celeste to join us. 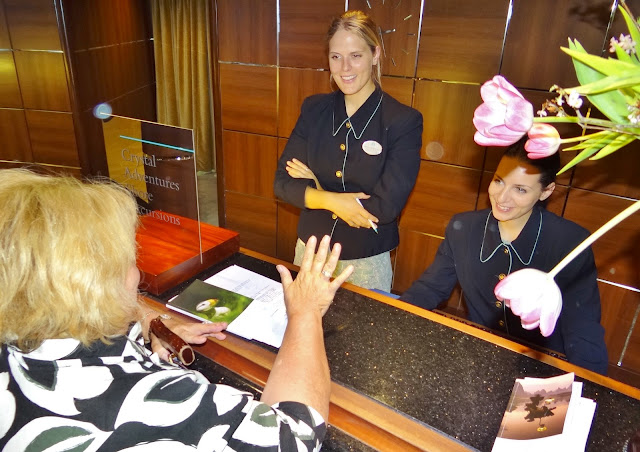 On my way ‘home’, I stopped by Celeste’s to see the 2 outfits she had made in Hong Kong.  It boggles the mind what a tailor can do in 48 hrs.  They didn’t do the collar on one jacket the way she envisioned; but I think they are both beautifully done.  She doesn’t have the appropriate shoes or bags to go with them; & I offered her a pair of silver pumps & bag.  She followed me home; liked the shoes & the bag; & ended up sitting for a long time talking.

I settled down to work on the blog about 6:45.  Liz brought dinner at 8:15.  As promised Giuseppe had them make the corned beef & cabbage strudel again (looks just like it did today at lunch).  I also had some fabulous cream of asparagus soup. 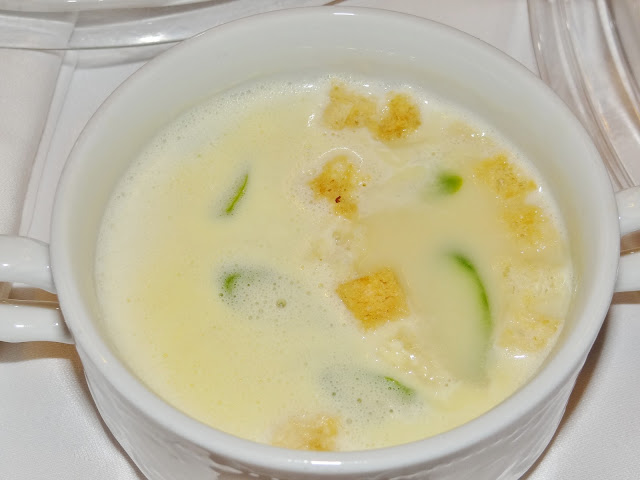 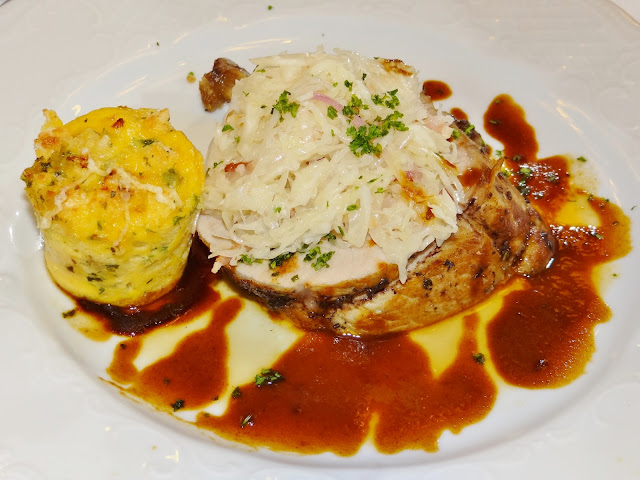 I saved my dessert for much later; but it was one of the best desserts I’ve had ANYWHERE….sticky toffee pudding with caramel sauce. 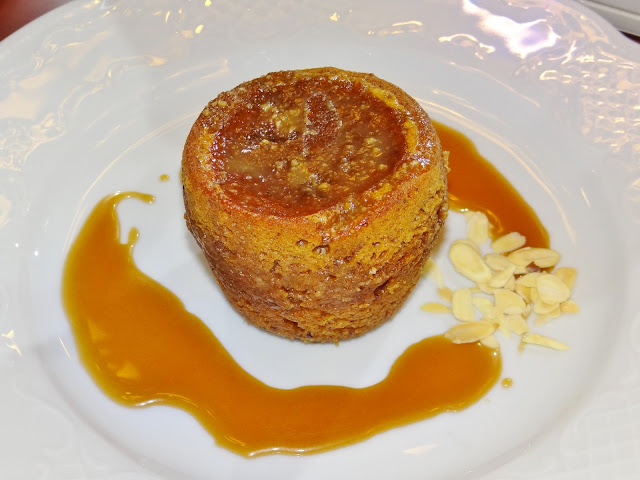 While I was on the computer, I also watched a replay of the lecture by noted photographer, Neil Leifer (Sports Illustrated & Time Magazines).  Called it a night at 1:30 am. 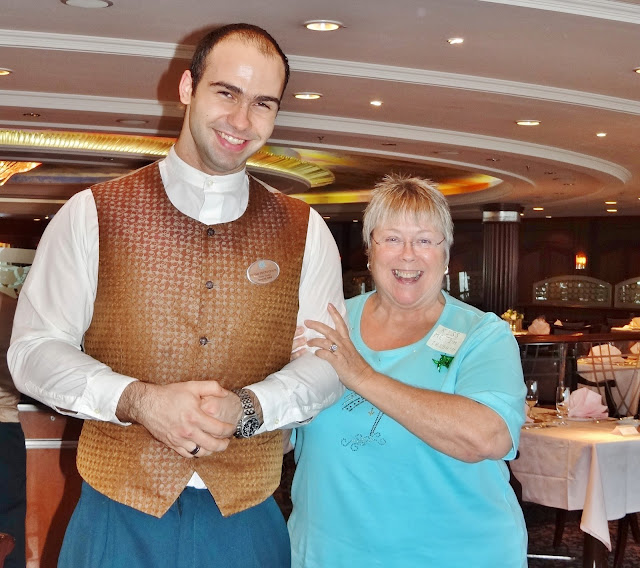 My big thrill for the day was getting to feel up Petar’s HUGE biceps.