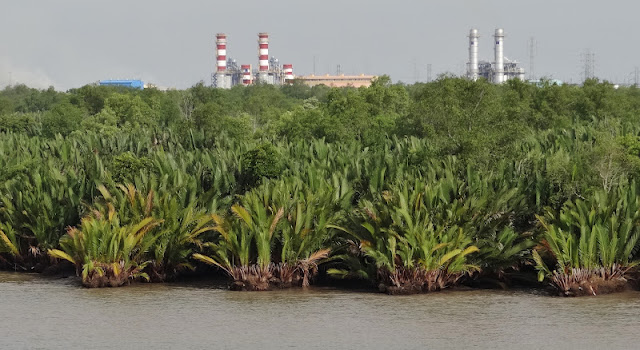 Since we weren’t scheduled to arrive until around 11 am, there was no need to set the alarm.  I didn’t know that there would be several hours of scenic cruising as we sailed deep up into the Saigon River.  So I was shocked when I opened the drapes.  I could tell that it had rained earlier; but there was now bright, hot sun beating down on the starboard side of the ship.  However, there was a nice breeze on my verandah.  On my side, I saw a lot of ‘jungle’ area; small fishing boats & barges.  There was a lot of horn tooting.  Not sure if it was ours or theirs; but there was constant communicating going on. 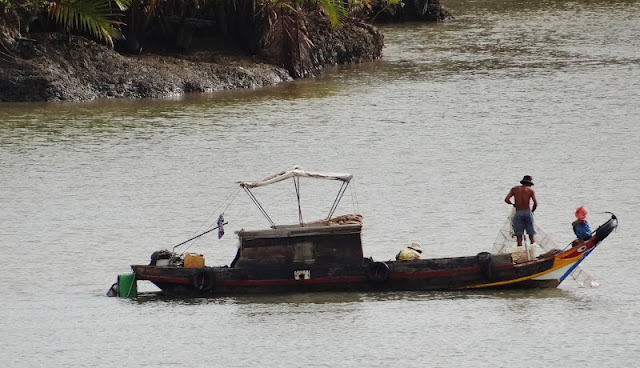 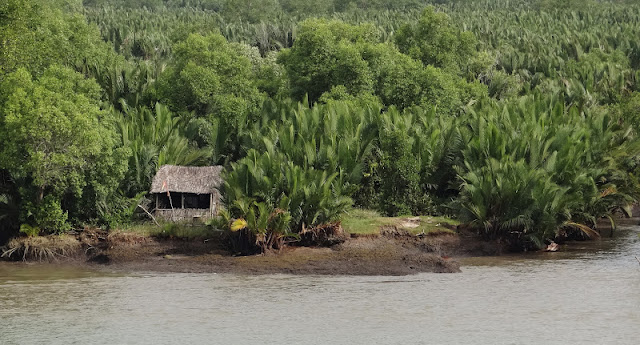 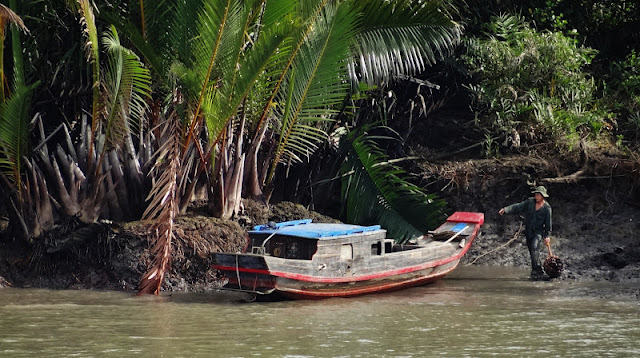 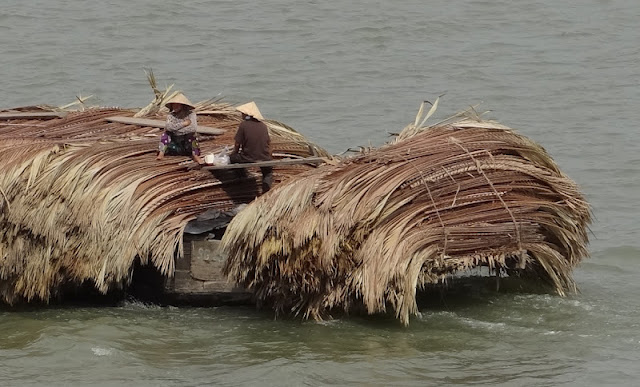 On the morning show, they showed a painting that had been done by an elephant in Cambodia.  The handler put a brown paint brush in the elephant’s truck; & he drew 2 tree trunks.  Then he put a green paintbrush in the elephant’s trunk; & the elephant drew the grass.  The tour guide then asked the visitors to choose the colors for the leaves. The elephant drew a layer of green on all 4 branches; then blue on 2 branches & topped it off with red on 3 branches.  I thought it was pretty brilliant myself. 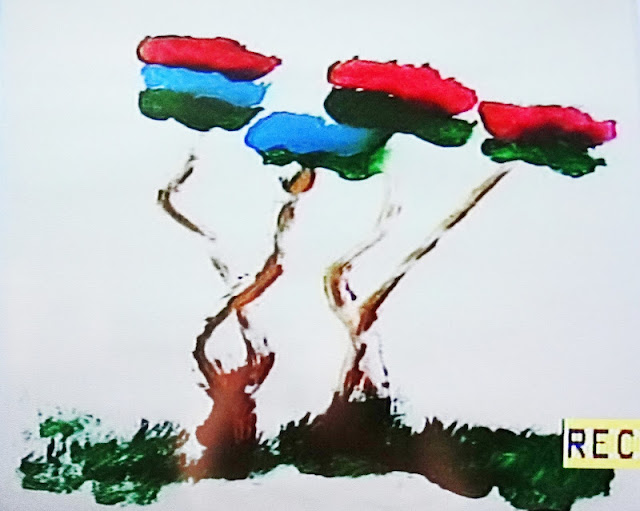 I went to the Bistro later than normal this morning.  My tour would leave before & get back way after lunch.  While I was eating, Keith & Anne Marie stood a chatted a little while.  Then Rick (Cruise Dir.) came over & also welcomed me to the W.C. ‘club’.  Rick was joking about Celeste seeking him out to make SURE that I got an iPad, now that I was staying on.  I told him she was protecting me like a mother; & she’s the only one I knew who would be bold enough to do it. 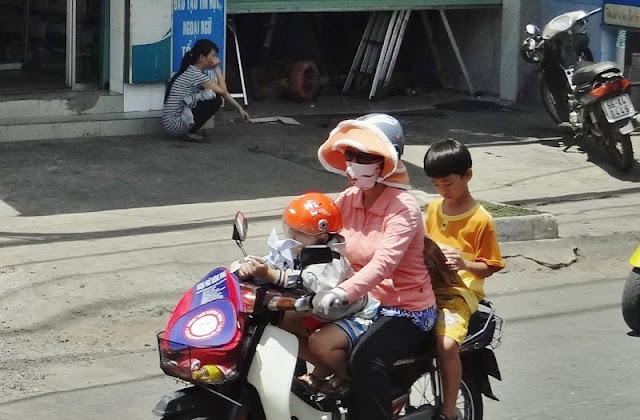 About 11 am, I could hear the Capt’s voice over a PA system; but it was only being broadcast in the crew areas.  All the guys rushed back to the galley area; & I stood up with an ear in that direction so I could hear too.  The Vietnamese officials had instated a curfew on the crew from 11pm-5am; & the Capt. was announcing that the curfew had been lifted.  There were cheers & high-fives all around.  Crewmembers all over the ship were beaming the rest of the day.  It would have been so unfair to be docked overnight for 2 nights & the crew not be able to go ashore when their day was done.  I took 2 rolls & made ham & cheese sandwiches to tide me over on the long bus tour this afternoon. 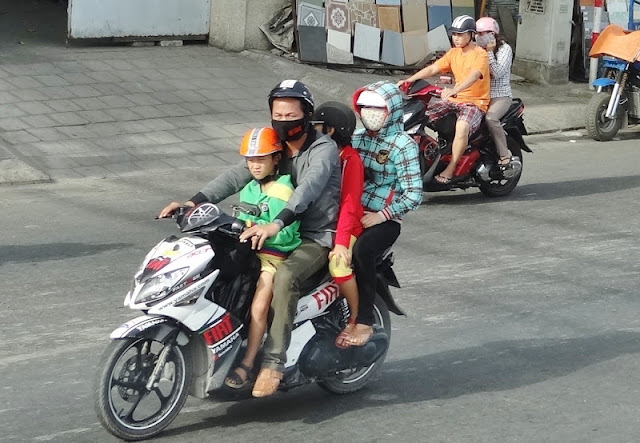 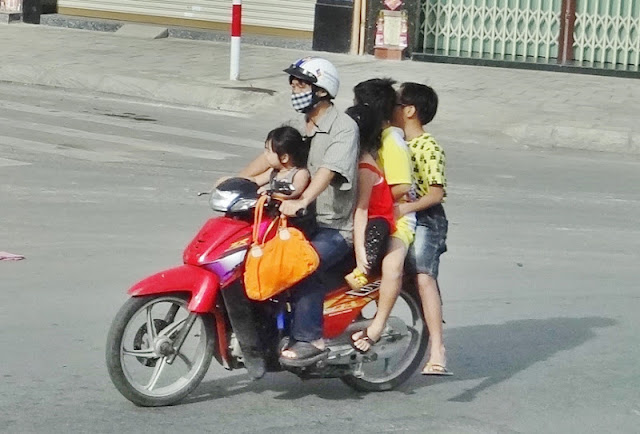 Just how many Vietnamese can you get on one motorbike?

Tour HCM-AW (Panoramic Ho Chi Minh City) departed at 11:45.  I headed straight to the last bus (#8) in hopes that it would be less full (less than ½).  Rev. Jack Shumaker was the escort.  Darko from the Shore Excursion Dept. started with our bus; but rotated to the other 4 buses at each stop.  We had a really sweet guide, who wished to be called “Tiger” (as in T. Wood).  The distance from the port into the city itself, took a little less than 30 mins (not necessarily because of distance, but because of traffic flow).  Being a Sunday the traffic was only a small fraction of what it would normally be; & it made it much easier for the bus to get from point to point.  There were tons of scooters, a few real motorcycles, very few bicycles, & a small amount of cars. 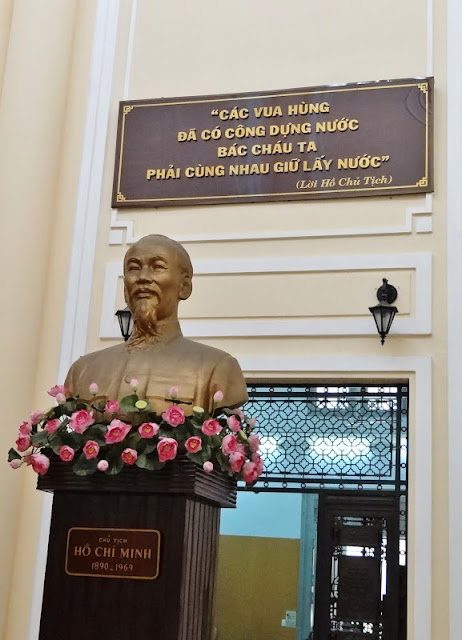 This also provided a chance to watch ‘families’ out doing the normal family things on their day off.  Lots of shoppers, people picnicking, some snoozing on benches in the shade & some strapping on as many purchases as they could possibly fit on those scooters.  And of course, tons of street vendors. 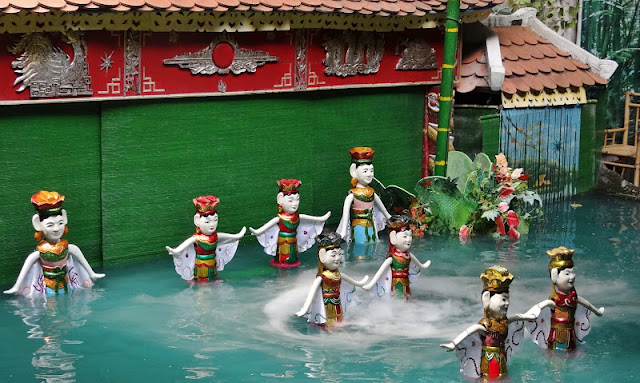 Our first stop was at the Museum of Natural History.  It was very warm, no a/c; & we moved through 17 different rooms that showcased artifacts from 2000 BC to the 20th century.  I’m not normally enthused about historical artifacts; but Tiger did have some fascinating stories to share.  At the end of the tour, we were treated to a 15 min. water puppet show.  How they do this, is not easy & pretty amazing.  But cute as it was; I’m glad it was not the normal full 1 hr. show that some pay extra for.  That would have been just a little too much. 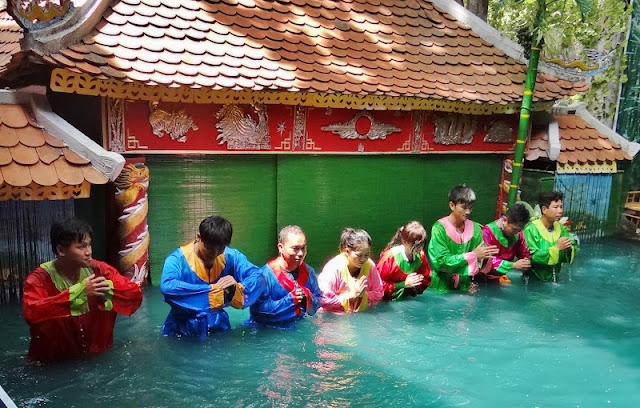 Making our way back into the center of town, we made a photo stop at the former Presidential Palace, now known as the Reunification Hall.  People of the U.S. might remember it, as it was here that the North Vietnamese broke through the front gate with a tank on April 30, 1975.  The tank sits on display off to the right side of the front lawn.

Our next stop was at the Notre Dame Cathedral.  There was a wedding taking place; so we weren’t able to go in.  Across the street was the Central Post Office which was designed by the same man who created the Eiffel Tower (for what that’s worth).  I had read that the dome of the P.O. was decorated with ancient maps.  It reminded me more of a train station.  The floor mosaics were beautiful; as were the phones & ATM’s housed inside ornate wooden phone booth-style cubicles.  Yes, there were the obligatory souvenir shops; one off each side of the entrance.  Other than that, I couldn’t understand why large numbers of people were sitting in the ‘lobby’.  It wasn’t because it was that cool in there; & no postal business was taking place.  Yet, it warranted a 30 min. visit….. 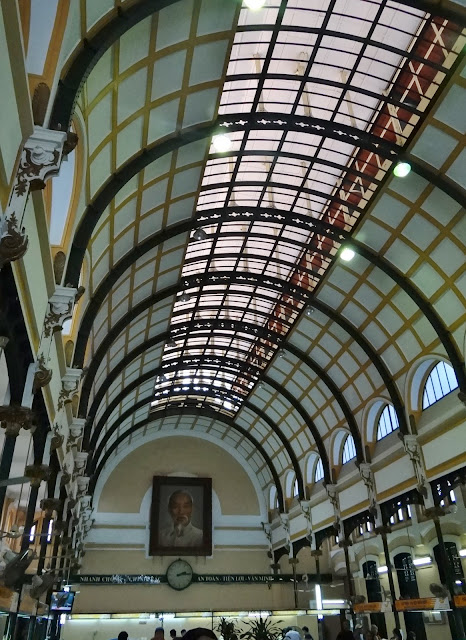 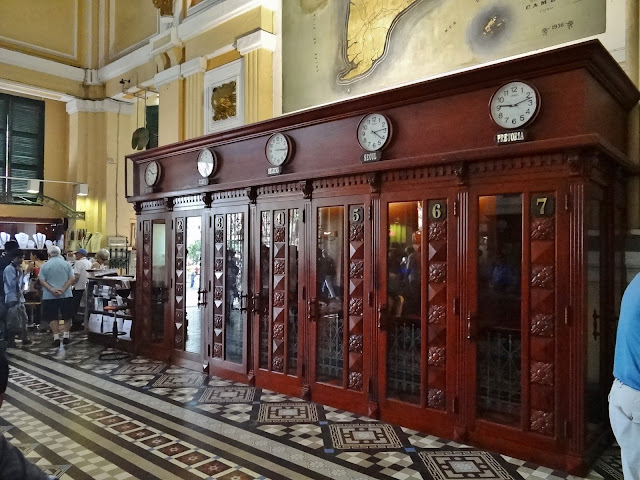 Next stop…..the Minh Phuong lacquer factory.  I wasn’t enthusiastic about making this stop either, there were to be many ‘on & off’ the bus moments today; but nobody else was staying on the bus.  I do own some lacquer pieces; & had no idea how they are made.  We were walked through each of the processes; & I can understand why the good pieces are so expensive.  It’s hot, messy work.  The highlight was visiting their gallery.  Their pieces were exquisite.  Some of us were buying; & having things shipped home.  My big purchase was an icy cold can of Coca Cola. 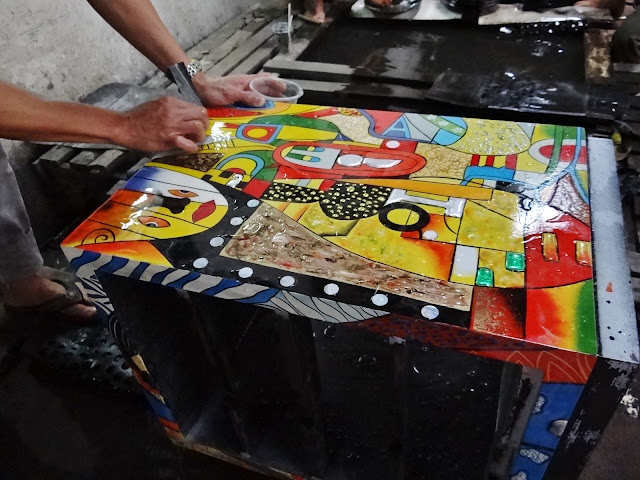 For whatever reason some people wanted to actually stop at the Rex Hotel.  This is where the free Crystal shuttle was picking up & dropping off those who wanted to go out on their own.  I guess there were a few less faces on the bus toward the end.  I took photos of the park areas & the building itself.  The highlight of this stop though, was the sweet young woman peddling fans beside the bus.  Rev. Jack came onboard; & said he got 7 fans for $5 US (plus a packet of postcards).  That’s the best deal I’ve heard since I started looking for more fans.  Well, the rest of us hauled ourselves back outside; & we just about wiped out her supply.  Other than a smile, I don’t remember her ever saying a word.  I couldn’t be picky at that price; so I only came away with one fan that had a little bit of purple on it.  They say timing is everything; Ho Chi Minh SHOULD be the last stop we have where it will be in the 90’s. 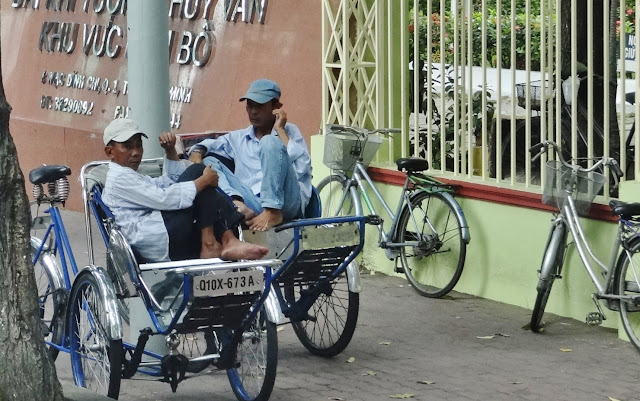 We next drove through China Town (or Cholon).  Masses of people; shops with brightly color Chinese home décor (lanterns, fans, wind spinners, etc); food carts & blankets spread on the sidewalks piled with all kinds of trinkets for sale. 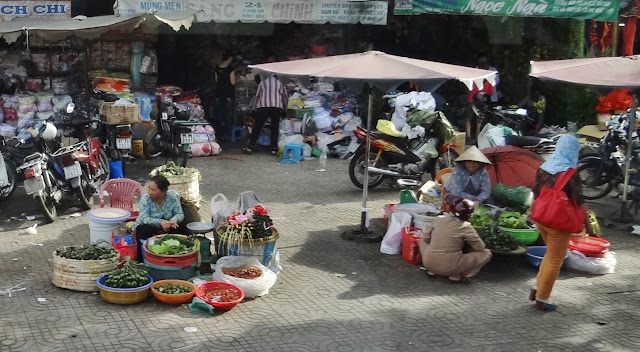 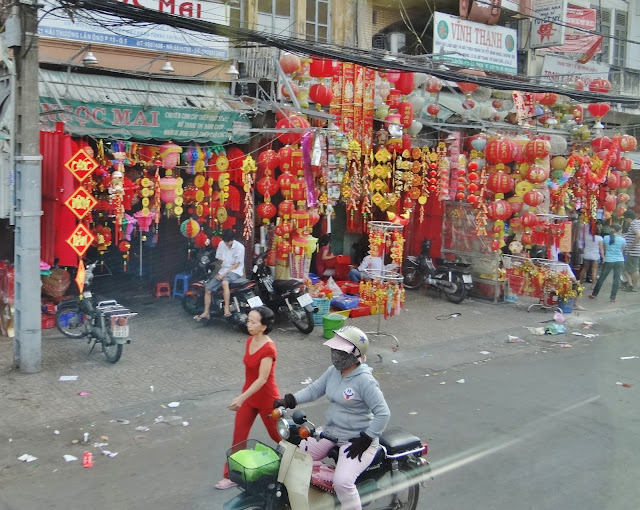 Our last stop was the 18th century Thien Hau Temple (dedicated to the goddess protector of sailors).  Not as large as some I’ve seen the last week or so; & one that certainly shows it’s age.  You can still tell that, in its day, it was most impressive.  The smell of incense was overpowering; & the locals were placing even more at various small temples throughout the complex.  There is a wall of purple ribbons (banners as Tiger called them) that were placed in honor of those souls who have moved on.  Toward the back was a pagoda with the ceiling lined with row after row of incense coils.  Just behind that was a beautiful altar with 2 smaller altars on each side. 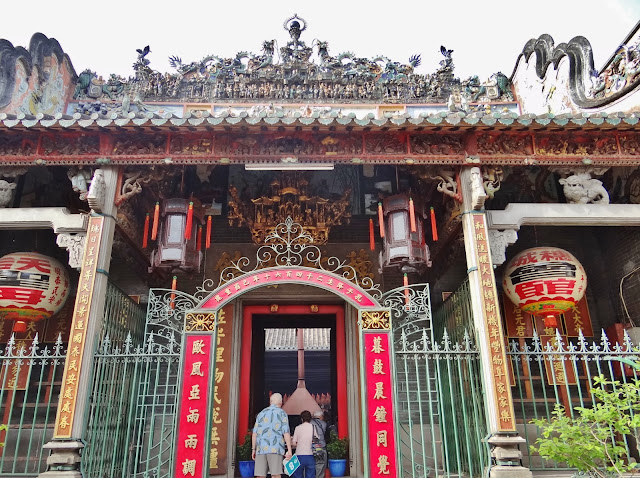 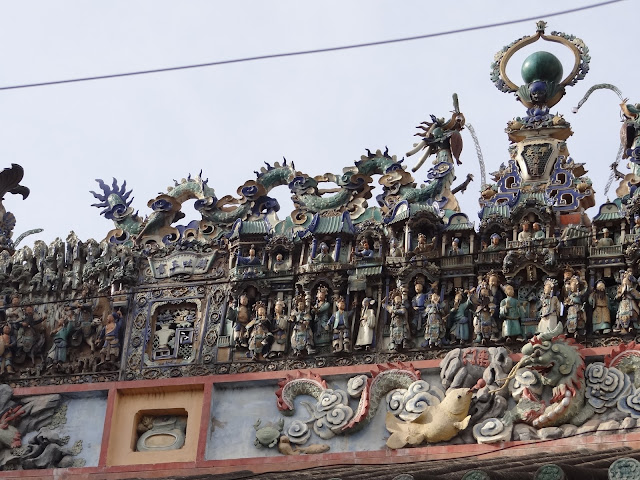 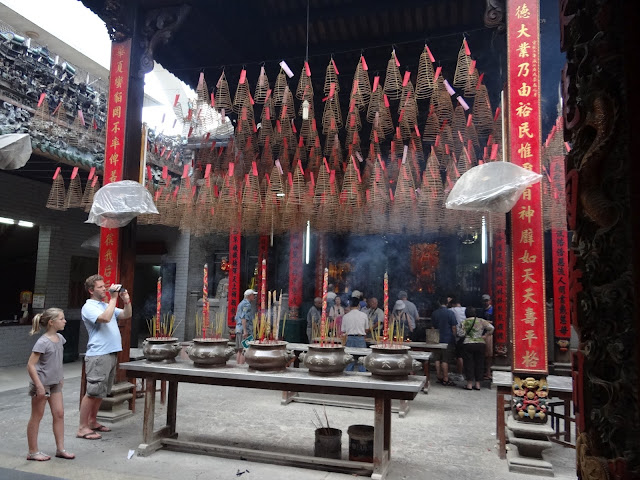 As we made our way back to the port area, I realized that we did not get to see the Binh Tay Market.  I’m guessing with the unscheduled stop at the Rex Hotel, that meant sacrificing the market.  That’s a shame cause I’d bet it was a bustling & colorful place. 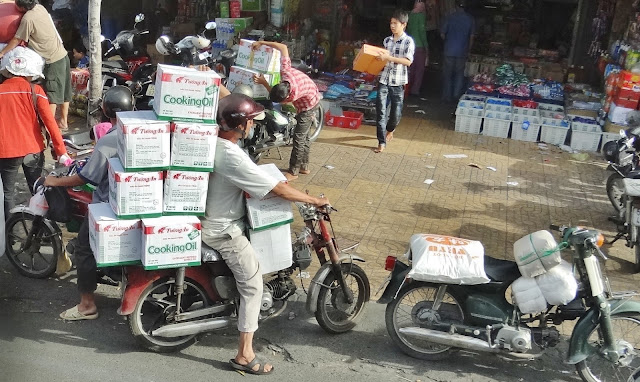 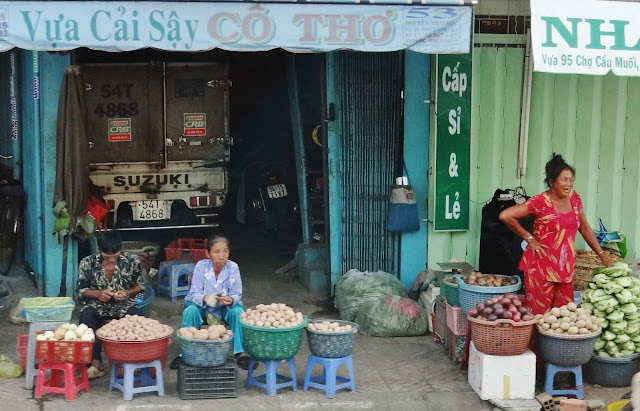 Back onboard around 5pm, I made a quick trip up to the Trident Grill for a snack (grilled cheese sandwich) before my 6 pm massage appointment.  I also got a cheeseburger to have later tonight since nothing on the dinner menu was calling my name. 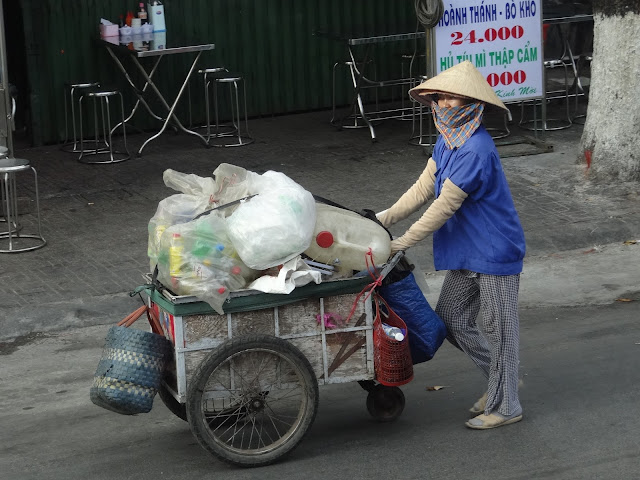 I explained to the masseur my problem shoulder & back; & that my legs were painful from all the fluid that was built up there.  He did deep tissue on my back; & really worked me over.  He did the best he could on my lower legs & ankle; but just the least amount of pressure hurt pretty badly.  I was a worthless blob after that.  Back in my cabin, I could hear the pounding bass beat of what sounded like disco music.  I went out on the verandah; & there were lots of people (pax & crew) milling around the vendor stalls that had been set up along the pier.  It was already dark; & someone had set up an impromptu ‘restaurant’ out there.  Through my camera lens I could see a lot of white uniforms.  Obviously the crewmembers were enjoying their evening ashore right here in their own backyard. 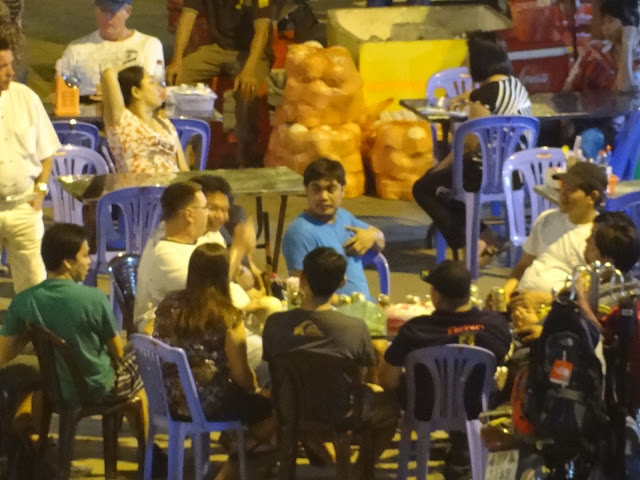 I got my burger & sat out there; & watched them at play.  Over the next few hours, I heard several versions of happy birthday being sung.  Each one began to sound a little more intoxicated than the one before.  The smells of the food were very tempting.  Had I not been so ‘lethargic’ from the massage, I would have gone down there to check it out.  Maybe tomorrow night? 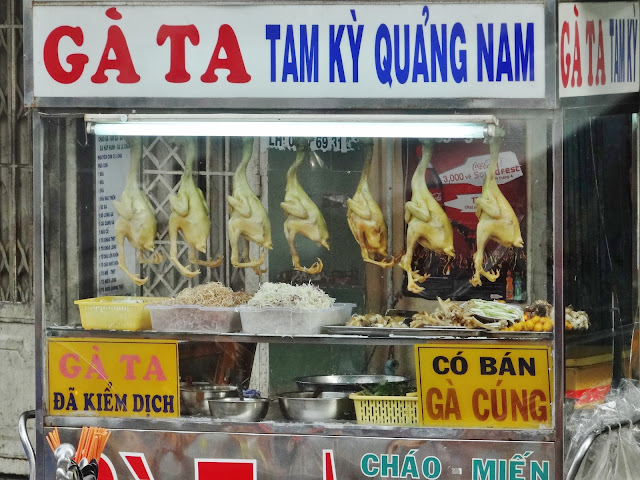 Liz came in to check on me; & she stood out there with me for a long, long time watching & talking.  We both were comparing our stories of being brought up in a very small town; & how we never imagined ourselves in such an exotic place.  She came very close to doing missionary type work so she could ‘see the world’.  But she’s grateful that she chose this path to see the more ‘urban’ world instead of just rural, poverty stricken areas.  Liz also informed me that tomorrow morning, they are finally dumping (actually donating) those tacky verandah tables & replacing them.  So, in addition to new clothes & new toys, Santa is bringing me new furniture.

I didn’t want to sit at the computer; so I put my feet up in bed & intended to read.  Every 30 mins. or so I kept getting up & looking outside to see what the crowd below was doing.  As more crew members finished their shifts at midnight, the numbers grew & grew.  I heard later that they shut down somewhere between 2:30 – 3 am.  I’m just so happy that they were able to ‘party’ a little & not have to worry about transportation back to the ship.  I’m sure it’ll be pretty much the same tomorrow night.