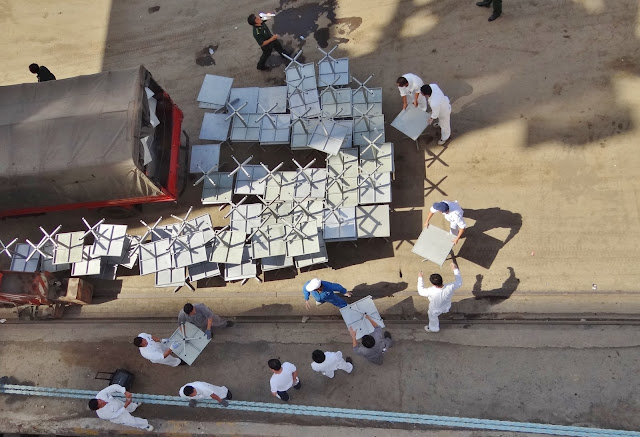 It was a relief to have the ‘day off’.  I got my day started slowly.  When I looked out on the verandah about 9:15, I was surprised to see that the table had already been removed.  Whenever they came, they were very quiet about it; & the folding panel between the verandahs had been closed & locked back.  I looked directly below on the dock; & there were all the old tables stacked up about to be loaded on a big truck.  I’m sure that Crystal will donate them locally, as they did when they replaced the old TV sets & mattresses.  Liz told me later that even the drapes & carpeting that was replaced during the recent dry dock was donated.  Maybe all cruise lines do this, I don’t know.  But I think it’s an excellent idea.


I went up to the Bistro for some breakfast about 10.  The ship is fairly quiet this morning; everyone is either still on an extended overland adventure or off on a day tour.  I got my usual fruit, cheese, salami, prosciutto, Portuguese tart & cappuccino.  Capt. Glenn came in for some coffee; & when he left he said he was going into town to check out a store that somebody told him about that sells ship’s models.  I asked him if he had a collection; & he said he did.  While I have a few small models of my favorite ships, he collects the ones that are about 2’ long. 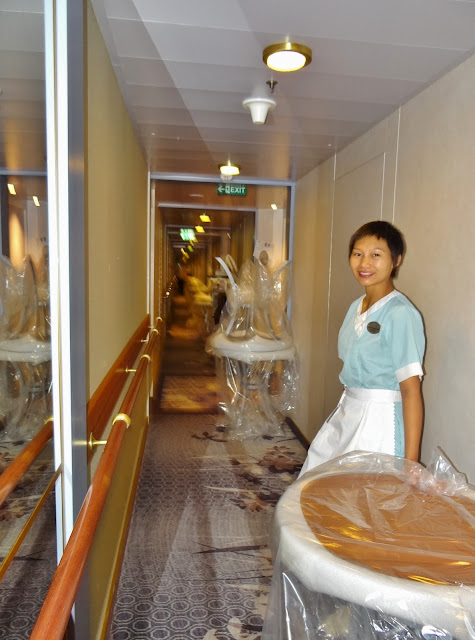 When I returned to the cabin about 10:45 the hallway was lined with the new verandah tables all wrapped in plastic ready to be brought in the ‘front door’.  Some of the dining room waiters were going to help put them in place.  Liz knew I was ‘home’, so she knocked; & said she would bring mine in.  I told her I could easily wait for one of the guys; but she said they’re not heavy.  And she wanted me to be the first person on deck 8 to get mine in place.  It looks really nice.  Unlike the old square one with a metal top, these are round with a smaller surface.  They look like a wood laminate framed with grey metal.  They are a nice height for dining.  Now, if we can just hurry up & get those old chairs replaced. 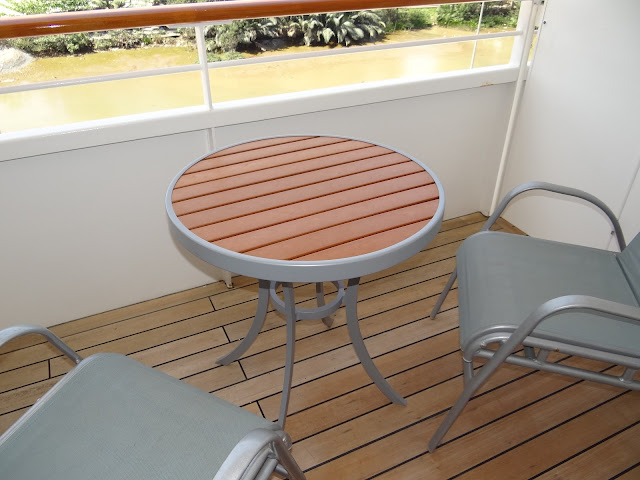 I also noticed that the tide was so low earlier this morning that the tiny boats that are on the inland side of our pier were sitting in green muck.  I guess the spot where we’re tied us must be dredged pretty deep or else we’d be sitting on our keel.  Before I went up to a late lunch, I made a stop at the Computer University to ask Jessie if there would be more iPad classes.  He said he’d have to put me on the waitlist for one day after tomorrow.  And if I can’t get into that one, I can confirm a class on the next segment. 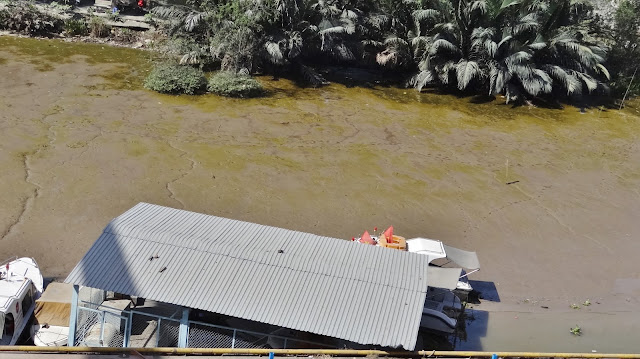 The Lido buffet was closing about the time I got up there.  So, I got every course all at once & found a quiet spot.  I worked Sudoku puzzles & chatted with several people who passed through while I ate.  My lunch was very, very good; most of which I’d never seen on the menu before.  There were pork medallions that were topped with a cranberry crust & gorgonzola sauce, celery piccatta (kind of reminded me of fried green tomatoes) with a tomato basil sauce; sautéed spinach; Vietnamese stir fried beef strips with onion, garlic, bamboo shoots & coconut juice over rice; white cabbage salad with tomato & onion, pasta salad with grilled zucchini & eggplant.  For dessert, caramel mousse. 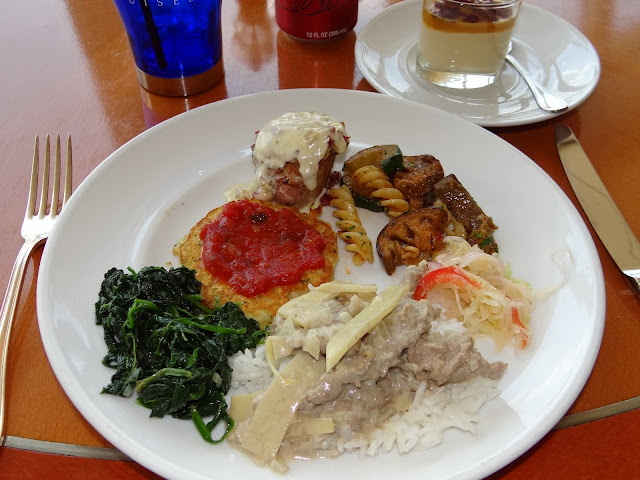 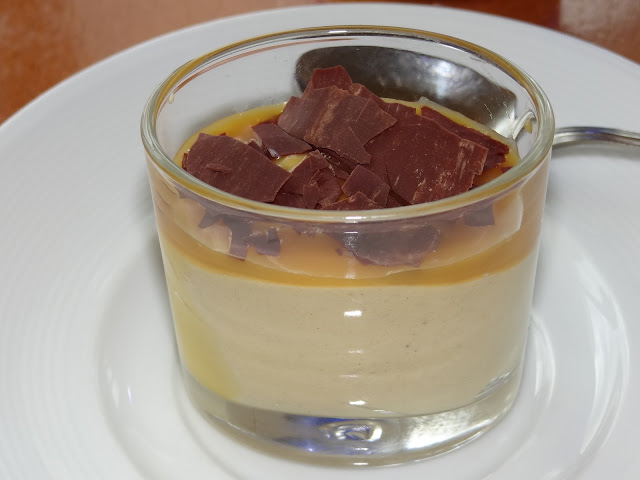 I went back & worked on the blog for several hours.  I’m able to put the words on paper; but the photos that go along with it are what’s holding me up.  After talking with several crewmembers today about how good the food was out there on the dock, I just had to go down & check it out.  On the elevator there was a lovely woman wearing an Asian pant set; & she looked gorgeous.  She said she had bought it downstairs this afternoon & decided to wear it tonight.  I just had to take a photo. 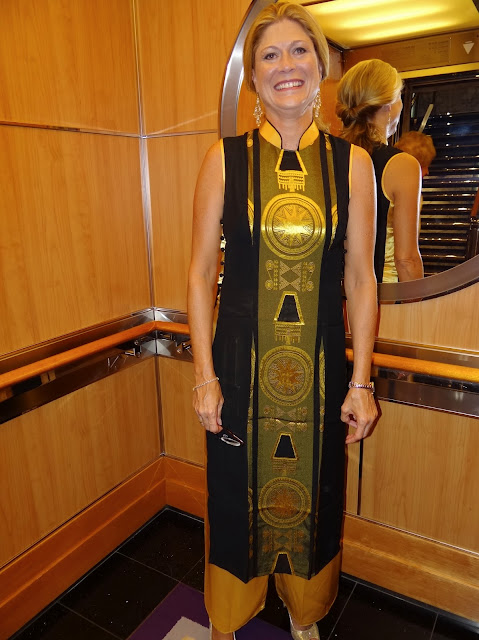 There was a wonderful breeze; & it was nearly dark when I went out about 7pm.  There wasn’t as much action down there then as there certainly would be later.  There were a few lady ‘staff’ members eating out there; the rest of the ‘crew’ would come much later after their shifts.  I perused the shops first; just the normal ‘stuff’.  They did have some nice looking lacquer panels & loads of fans (1 for $3, 2 for $5).  I passed. 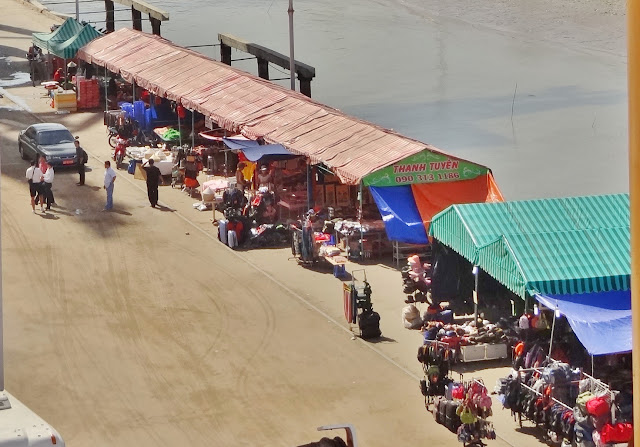 The portable ‘restaurant’ (if you can call it that) looked like it was family run; & could be set up just about anywhere you wanted to park that day.  A few of the ladies spoke no English; the others, only a few words.  They showed me a menu with US prices on it; & I spotted the garlic prawns right away.  I decided to order the prawns & some of their noodles (a cross between lo mein & ramen noodles) with vegetables ($13).  I suppose a woman sitting alone was a novelty to some of the local guys who were eating at the surrounding tables.  But they were watching me eat; sort of like they doubted that I knew how to use chopsticks (I do) or that I would freak because the food was too spicy (I thought it was perfect). 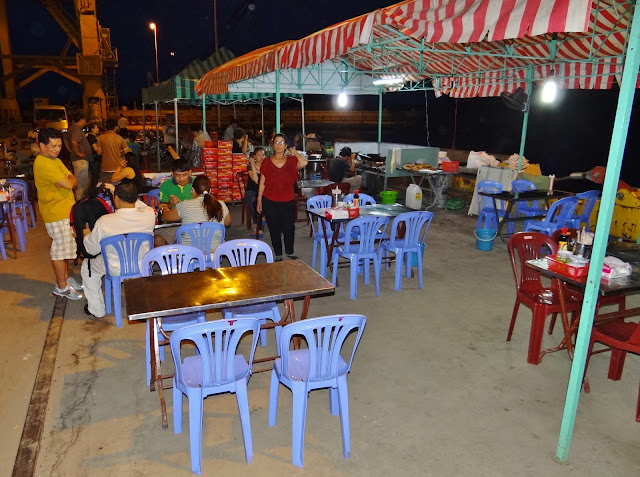 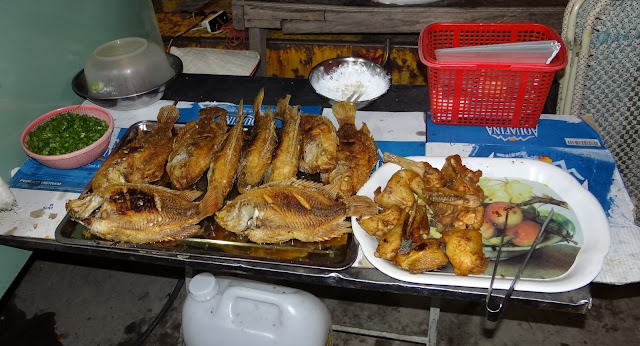 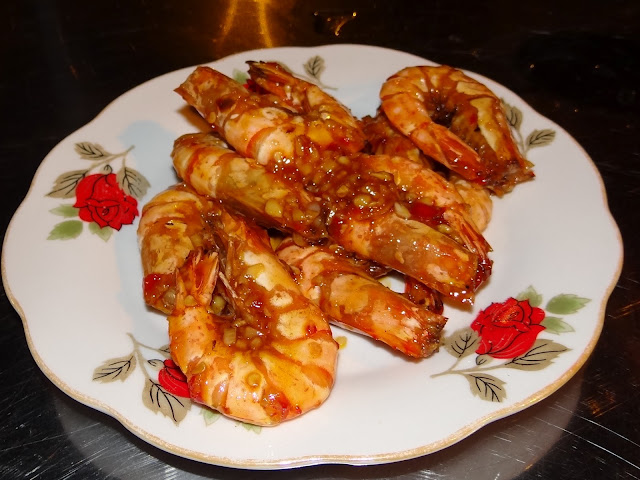 It was another one of those surreal moments as I sat there.  The disco music mix with the bass turned up a little too high; the moon was almost full; the ship right there beside me all lit up; listening to the high pitched sing-song of the women’s Vietnamese voices; swatting the occasional mosquito; & your nose running from the spices in the food.  I could almost close my eyes; pretend it was the early 70’s; & imagining the culture shock that an American soldier must have felt when he first arrived in Vietnam.  That’s sort of how I’ve felt these past 2 days.  Tonight’s dining room menu was chock full of delicious sounding Vietnamese influenced dishes.  But I wouldn’t have traded this experience for anything. 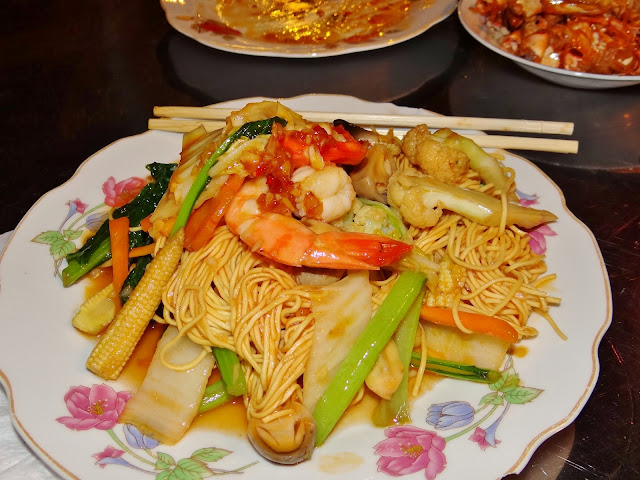 As I got up to leave (Shore Excursion Mgr.) James was just sitting down for a beer & some dinner.  He told me that yesterday was (Asst. Shore Exc. Mgr.) Debbie’s birthday; & that’s who was being serenaded H.B. so many times last night.  Other crew members were starting to make their way down the gangway to start their last evening off in a while.

Enjoyed your observations on Vietnam. The food at the family-run "restaurant" looked delicious!

A friend of mine is going on Safari - what kind of camera do you use? Thanks and enjoy Beijing!

Hi Becky - Still enjoying tagging along with you, your pictures are awesome !!! But, think I would strike Vietnam off my bucket list. I couldn't handle the poverty, filth and heat, but thats just me. Reading your posts is the hilite of my day, and I'm so glad the plans have fallen into place with respect to your decision to do the full World! You go girl!
dm

Was in Busan last September on a short RCL cruise out of Shanghai to Japan,Korea and Vladivostock