I set the alarm for 7:15; the TV says it’s 57*.  I stepped out on the balcony; it feels much cooler.  It’s a dreary grey outside with drizzling rain.  I was taking my time getting ready & packing my day bag.  At 8 am this horrifically loud (air raid type) siren went off outside.  I’m glad I was already awake; but I wasn’t sure if I should ‘duck & cover’ or what. I suppose the memories of Nagasaki were still a little too fresh on my brain.  Never did find out what that was all about. 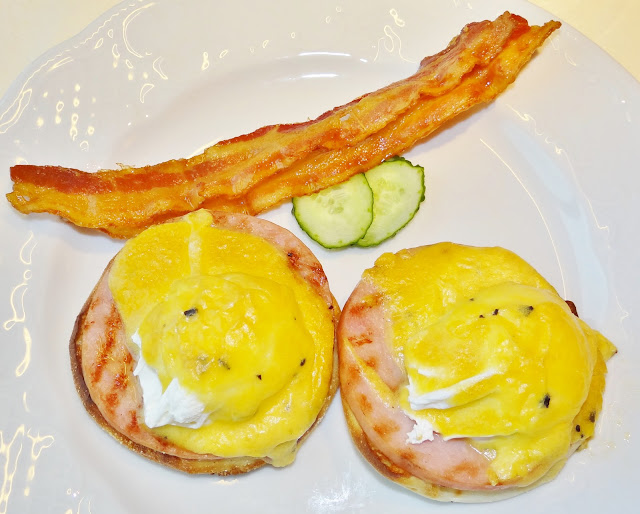 Since I had a morning tour at 9, I thought I’d go down to the dining room for breakfast.  Maybe I shouldn’t have ordered eggs benedict; because it was taking a little too long to come from the galley.  But it finally arrived, along with some bacon & grape juice.  I ate quickly. Turnaround days are always kinda sad.  People all bundled up in their coats, rolling their carry on bags with the look of dread on their faces.  It had already started pouring down rain; so it wasn’t a good day for air travel. 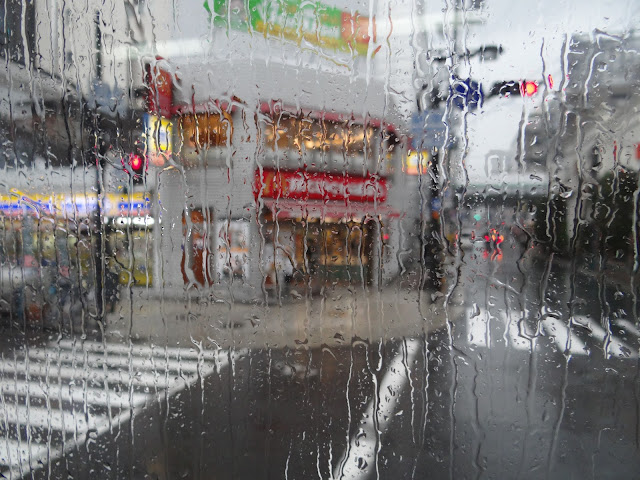 Today’s tour was Panoramic Osaka (OSA-AI).  What few of us there were, got on bus #6.  Andy (from the Casino) was our escort; our guide’s name was Haruko; & our driver was Mr. Kawabeta.  The bus looked brand spanking new & had oodles of leg room.  The rain was beating against the windows so hard, everything was a distorted blurr. I was having flashbacks to the day in Noumea in early Feb.  Didn’t see a thing that day either. 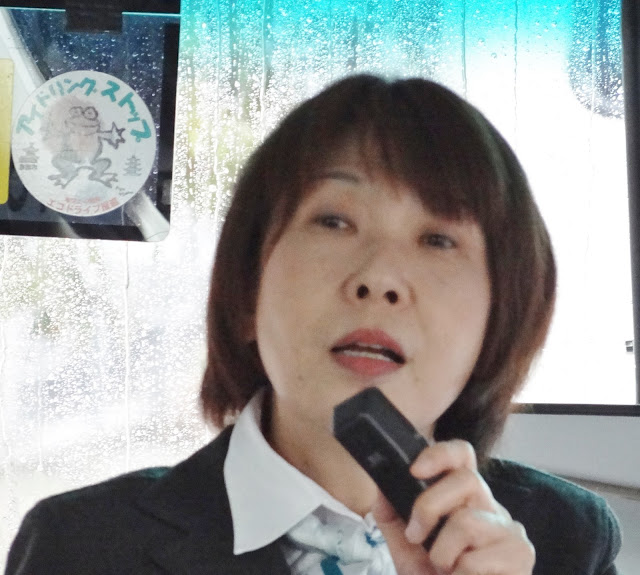 Haruko seemed like a lovely lady; but she started her spiel explaining the differences between Osaka & Tokyo.  She quickly pointed out that they are not on friendly terms.  Since Osaka’s has always been a merchant port city, the sales clerks are very friendly, always smiling.  While in Tokyo, having been run by feudal lords (samurai) throughout history, sales clerks NEVER smile. People in Osaka have a great sense of humor, often playing practical jokes on others.  People in Tokyo look somber & dead serious all the time.  I’m not sure where she was going with this, especially since we had told her that our cruise did not include Tokyo.  So I have no way of confirming the validity of this information. 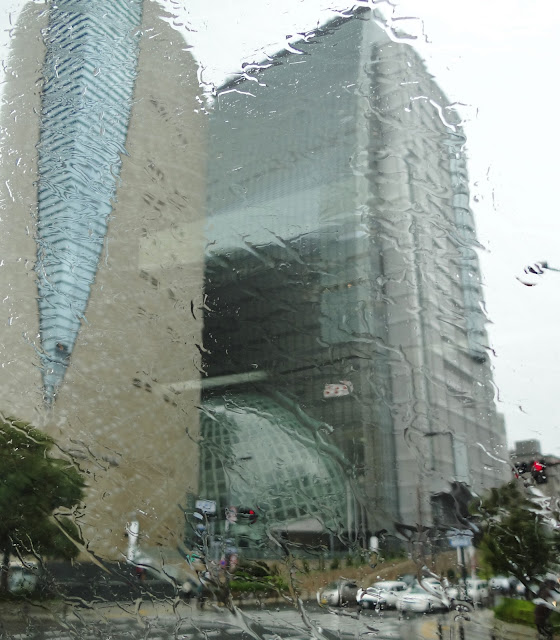 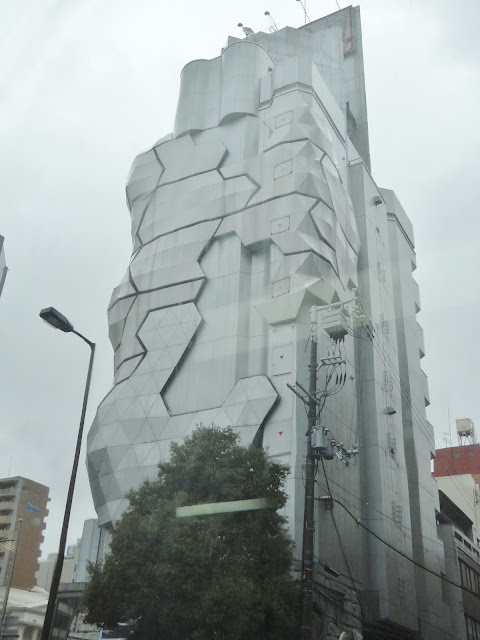 From what I could see as we drove through the city, parts of it are ultra modern.  A lot of tall, unusually shaped buildings similar to what we saw in China.  There are also areas that have a small town feel, with rows of brightly colored one story shops.  Yes; McDonalds, 7-11, Circle K, Pizza Hut & Starbucks are just around the corner everywhere.  Haruko joked that the city’s 2.7 million residents spend a lot of money on eating out. She said (& I quote), “we eat till we fall down”.  Alrighty then.... 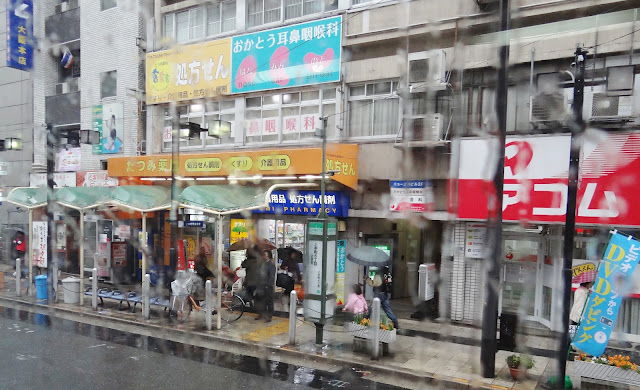 Some streets had 7 lanes of traffic going in each direction.  In all honesty, I saw quite a few interesting buildings.  I was moving from one side of the bus to the other trying to take photos.  But we were driving past them so quickly, there wasn’t time for her to tell us what half of them were.  I kept shooting; but only a few of them were decipherable. 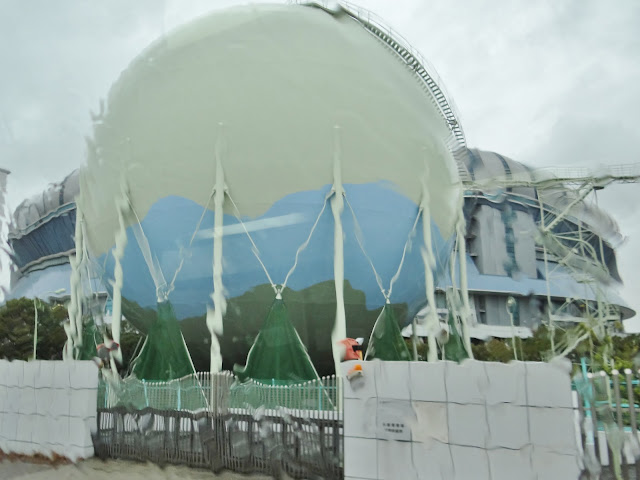 One particularly strange building was the Umeda Sky building which has a floating garden observatory on the top floor.  I would love to check that out on a pretty day. 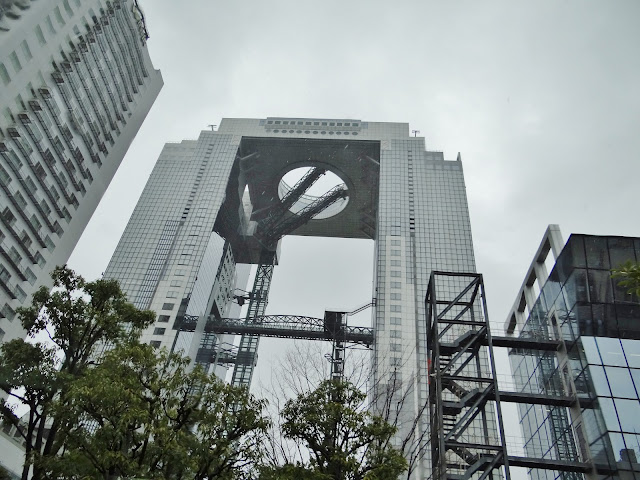 We drove along the river & viewed Osaka Castle from across the water. 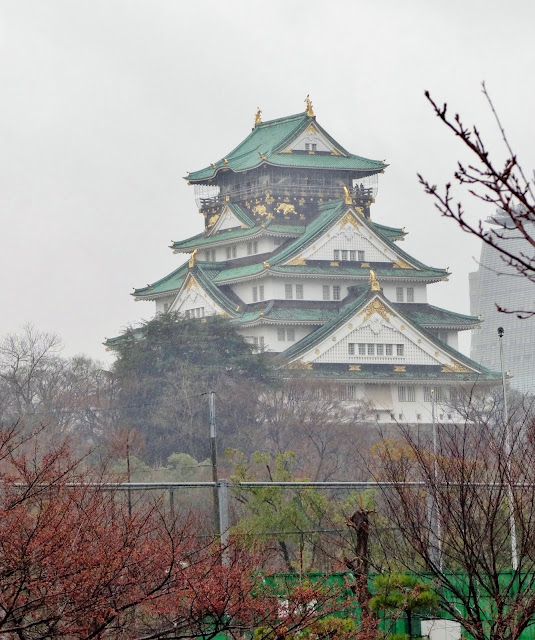 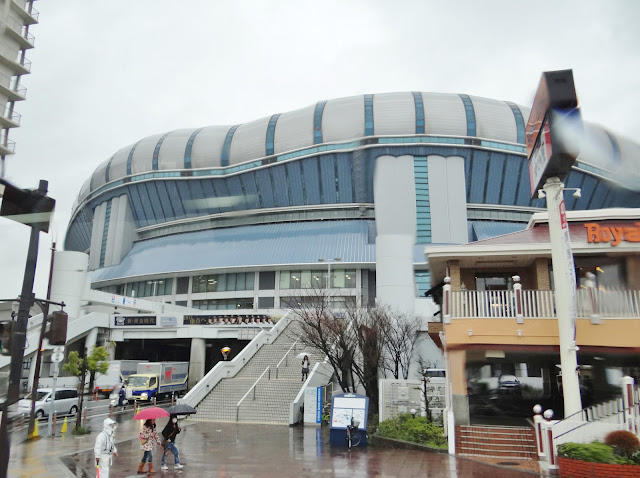 It was the start of the lunch rush hour when the tour ended; & we were stuck in heavy traffic.  When I spotted the big Tempozan ferris wheel, I knew we had to be getting close.  But we literally inched ourselves the rest of the way. It was nearly noon when we arrived back at the ship. 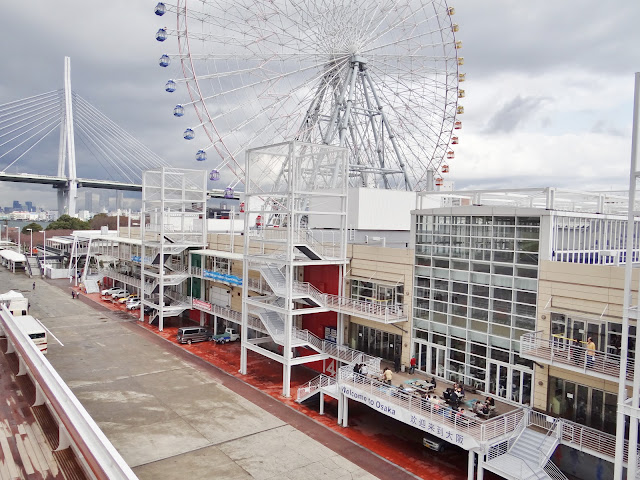 I peeked in the laundry room & saw that it was empty.  This would be a good time to get that out of the way.  So I quickly gathered everything; & got 2 loads done.  I hurried upstairs for lunch.  I found that the Lido buffet had closed early; Taste’s wasn’t open (turnaround day remember). So, it was going to be the Trident Grill for a burger.  Benjamin got me something to drink; & told me he had just talked with his family & learned that his youngest daughter had just been selected salutatorian. He was beaming from ear to ear.

It was still raining outside; so I laid down for a little nap.  The phone rang at 4:30; & it was Debbie.  She was about to sign off the ship & wanted to say goodbye one last time.  She had seen Celeste out on the gangway; & she asked Debbie to tell me that the wifi in the terminal was super fast (& to get my ass up & come down there). 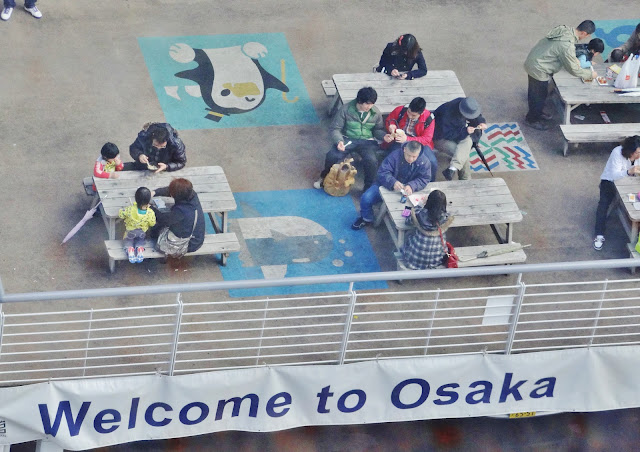 On deck peering down at the folks eating from the
carry out restaurants in the cruise terminal.


I packed up the computer stuff & made a quick dash in the rain.  I found Celeste & Bill (who were talking with another gentleman) over in a corner of the room.  There were quite a few tables & chairs, about half filled with crewmembers on their computers.  I had a plug right next to my chair; so I was happy.  The connection was fast; but a few us would randomly get knocked off.  And then had a hard time signing back on.  I thought it strange that there was a rather somber Japanese gentleman in uniform standing by the restrooms toward the back of the room.  He just paced back & forth, not saying a word; made me think of a prison guard. 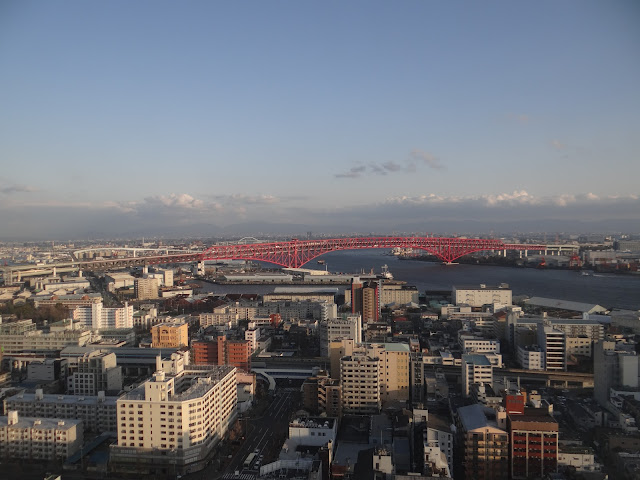 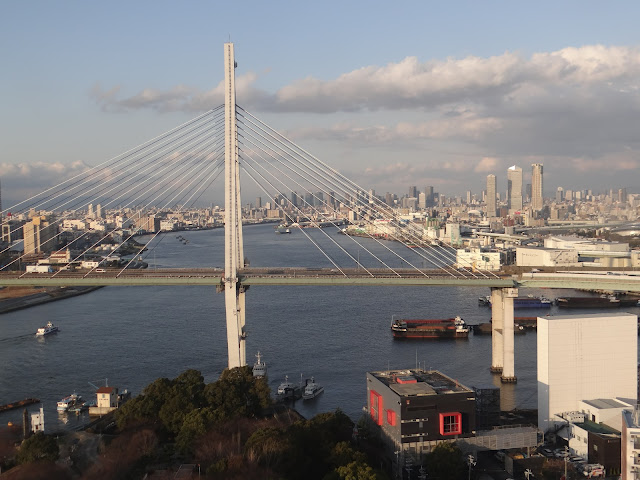 Kris & Betty came through, on their way out to dinner & to ride the ferris wheel.  They had ridden it this morning; but wanted to see the city lights at night.  (Thanks to them for the aerial photos of Osaka Harbor above.) I was very tempted to go with them.  But my mission was to upload as many photos as possible while it was fast & free.  In a short while, the guy started making motions with his hands, trying to scoot us out of there.  We didn’t realize that they closed this room at 7pm.  Bummer! 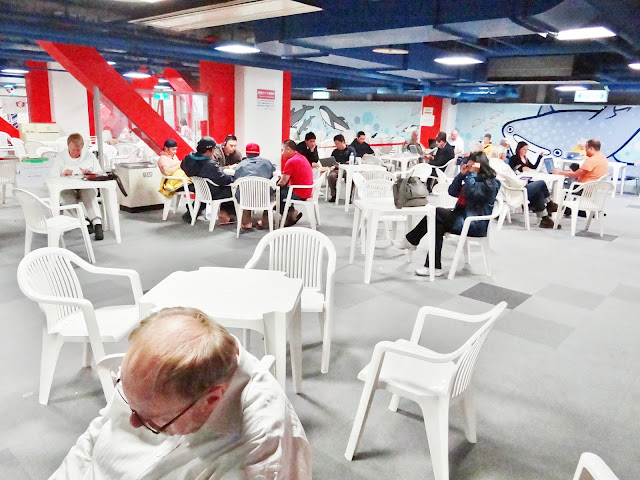 I stood outside the doors of this building hoping I could still get a signal. Then I tried again from the aft deck; but no such luck.  Since it was now dark, the ferris wheel lights should come on at any time.  I went in, got the camera, coat, gloves; & waited out on the aft deck.  It was damp & frigid out there.  I waited a good while before the neon light show finally started.  I ran in to get Lizzie so she could see it. 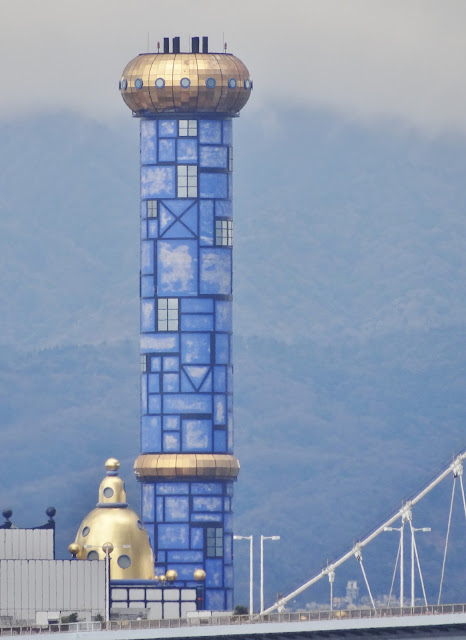 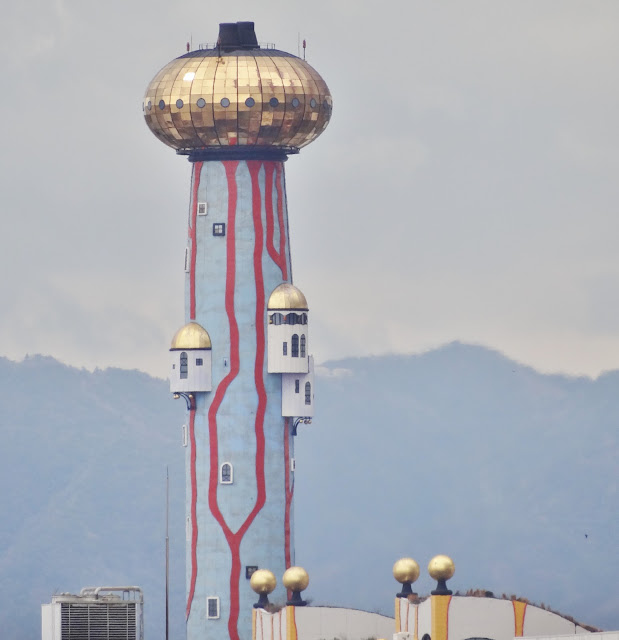 The tubes of light ran the length of the spokes of the wheel; & they flashed different patterns & different colors.  The lights stopped after about 5 mins.  I wanted to test the burst mode on the camera.  I waited & waited.  I didn’t realize that the lights only ‘danced’ every 30 mins! If it had been warmer, I would have sat there all night.  I made it through one more cycle.  By then I was chilled to the bone. 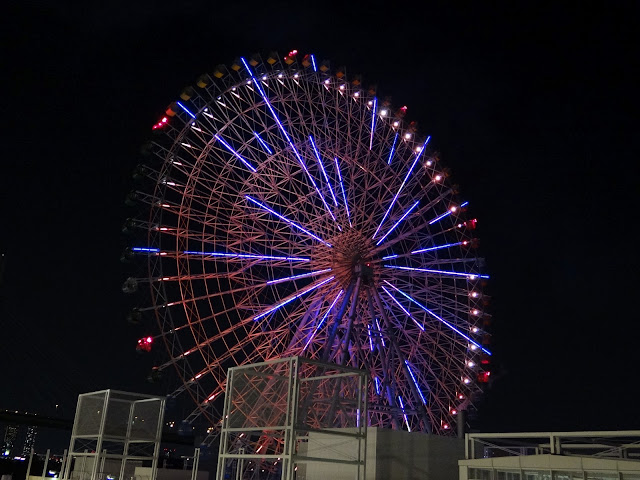 I carried my dinner order over to Liz; & she brought it about 9:15.  I had an appetizer of Japanese style fried shrimp with creamy honey sauce.  It was so beautifully presented on a ti leaf.  It looked like it had come from Silk Road. 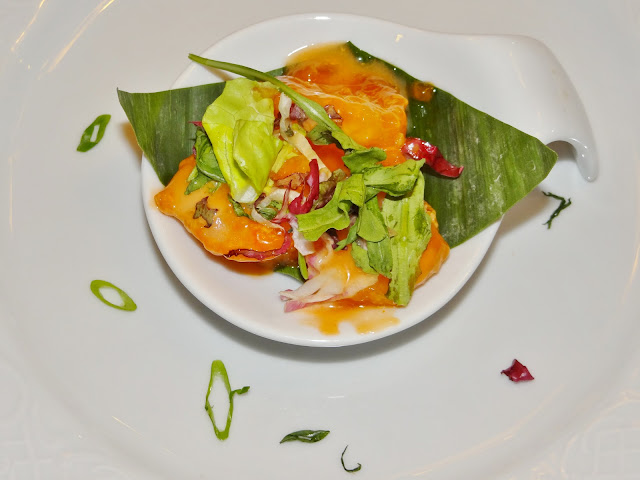 For my next course, I had the lobster bisque soup with puff pastry.  Very good. 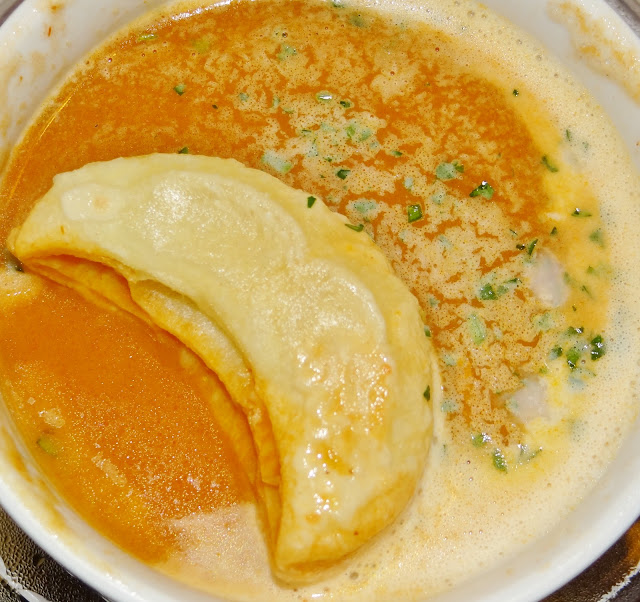 My main course was sirloin steak, wasabi mashed potatoes & wilted spinach. The veggies were excellent.  The flavor of the steak great; but it could have been a little more tender. 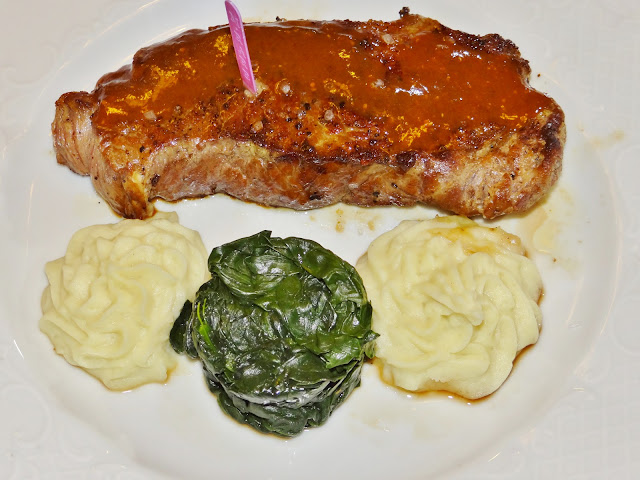 Since I have an early tour in the morning, I thought I’d get myself organized tonight.  I started packing my day bag; & laid out my clothes. Went ahead & got a shower & washed my hair.  That reddish rash I had around my ankles.....well it’s moved a few more inches to my calves. The benadryl spray didn’t help much with the itch; so I guess I’ll add in some sudafed pills.  I’m beginning to look like a leper! 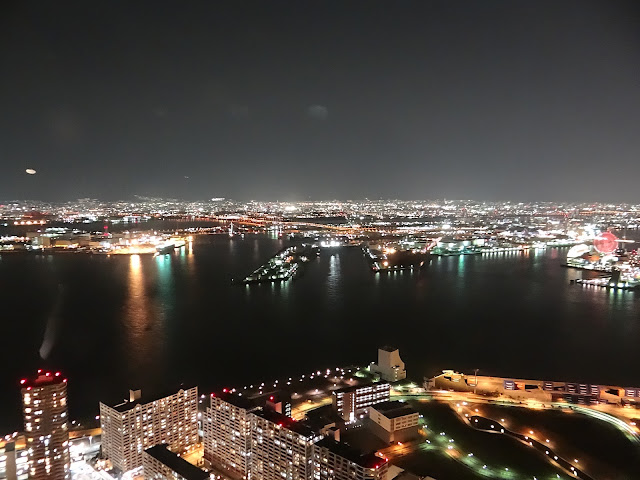 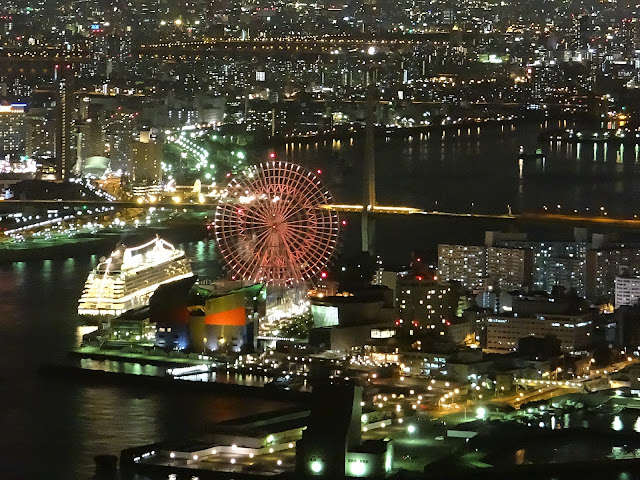 Photos of Osaka at night from the CosmoTower observatory. Thanks
to Kris & Betty again.
Posted by Unknown at 10:03 PM

Thanks, and thanks for the food pics (i know they're for me :)

So glad you are still writing your story! I check your blog almost every day. Thank you for continuing. I love the pictures. And I do hope the rash has gone away and it was nothing serious!

So glad that you are continuing to share you travelogue and wonderful pics from your World Cruise.

Where and when are you cruising next? .

For Anonymous,
Since I've blown my travel budget for the foreseeable future, I'm sad to say I will be landlocked for a good while.