I woke up a little before 8; another foggy drizzly morning.  I got right up & started pulling out drawers & stacking them up on top of the sofa & the bed.  The bellman would be coming later this morning with a rolling cart to assist.  So, I wanted to have all the drawers ready to load; & all he’d have to do is get the hanging clothes out of the closet.  I had gotten a letter saying that my new room (8144) would be ready no later than 1 pm; but Liz said it would be ready much sooner than that.  At any rate, I was a ‘man without an island’, nowhere to call home for several hours. 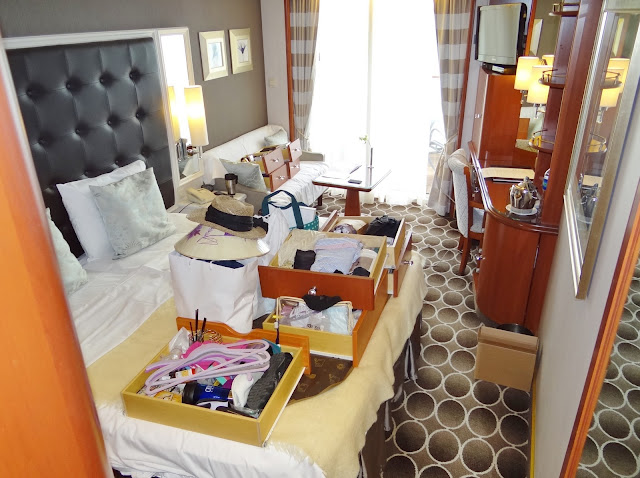 I took the laptop up to the Bistro & set up my office.  I did get some work done; but I kept people watching.  So many people bundled up in their coats, their carryon bags by their chairs waiting for their turn to leave the ship for the last time.  I was reading the look of dread on everyone’s face.  No one really looks forward to leaving this protective cocoon; & facing the chaos on the pier of finding your bags in that sea of luggage.  Then waiting for hours at an airport; & another 16-24 hrs. on a cramped airplane taking you back to the daily ‘grind’. 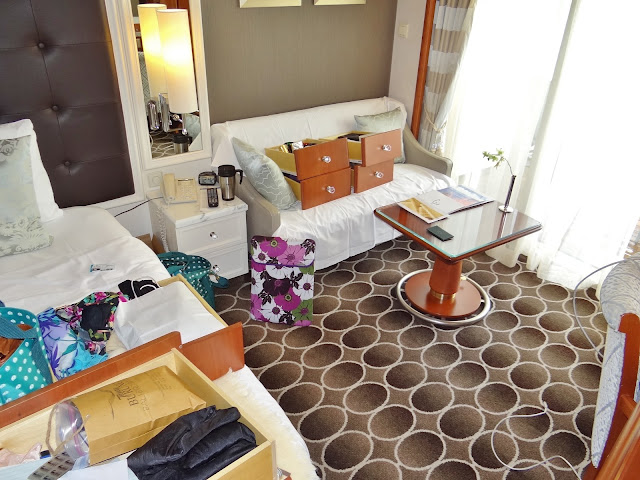 I had some fruit, cheese & salami with my juice & capp.  Celeste & Bill came in for their breakfast; & we sat & talked.  I got to hear all about her trip to the tailors yesterday; she’s having 2 outfits custom made.  She explained how you can look at samples already made up in the store or look through books.  Then you pick out your fabric; get measured; & 2 days later a one of a kind dress.  She was to go back this morning for another fitting; & pick up the final product tomorrow (our last day in H.K.).  Any outing that Celeste & Bill take is an ‘adventure’.  One or the other of them gets turned around; they’ll get separated or lost from each other.  When she gives me the rundown of their day, I usually end up laughing until my face hurts.


I made a trip down to the shore excursion desk to see about tomorrow’s tour.  I thought I had lost the ticket; but found out that they hadn’t even printed it yet (whew).  Then I stepped over to the concierge to ask if they’d heard anything about that last prescription that the doc was supposed to be getting filled in H.K.  Johann called the medical center; & got Nurse “Ratchett” on the phone.  From listening to his side of the conversation, it sounded like she was preaching her usual negativity.  He told her flat out, to talk to the doctor & bring the meds to him this afternoon.  As I do several times a day to either him, Melanie, Lizzie or anybody who makes the impossible happen……I say, “Have I told you today how much I love you?”  They always laugh; but they do make my life a lot less complicated.


I went back to the computer in the Bistro; & ordered another capp.  And then I experienced a moment of de ja vu…….oh no…….the espresso machine is broken!  This happened a few years ago; when ‘she’ died in the middle of an 11 day Panama Canal cruise.  I (& hundreds of others) were devastated.   They had to have another one shipped from Italy to Miami on the next turnaround day.  Fortunately, a call to the engineering dept. ; & someone was able to get it up & running again.  It was almost 11:30; & I thought I’d go check & see if it was moving time yet.  When I arrived at my old cabin, Liz was putting the champagne on ice for the newly arriving guests.  My stuff was gone; she & the bellman had done it all without me lifting a finger.  I was flummoxed! 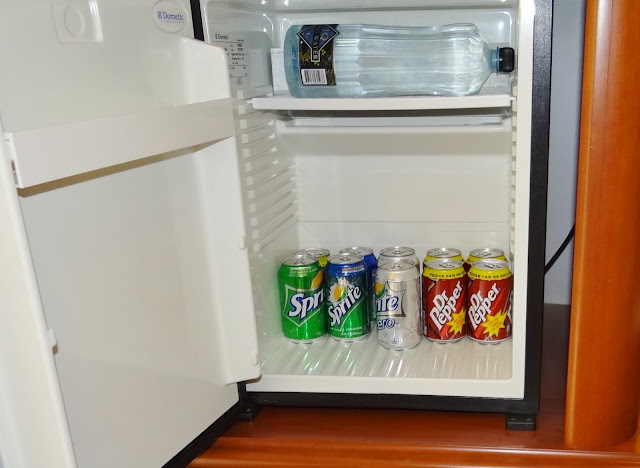 So, I took the short cut (going out on the aft deck & coming back in through the door at the end of the opposite corridor).  When I walked in, it was as if I had been ‘living’ there for 2 months.  My pillows were on the bed, drawers in place, clothes hanging, internet cable plugged into the wall waiting for my laptop.  My stash of Dr. Pepper & Diet Sprite chilling in the fridge.  She had moved the telephone to the right side of the bed; draped a sheet over the leather sofa.  I had to go back over & give her a big hug.  I’m so glad the housekeeping supervisor is allowing her to ‘stay with me’.

About 1:15 I went down to the main dining room for lunch.  First person I saw was Giuseppe, who came back from vacation (replacing Tall Peter).  He never changes.  As he walked me to a table in the back of the D.R., he was telling me about his time off in his beloved Tuscany.  I was so freaked about the move, that I forgot to take my camera down with me.  All I can tell you is that I had a beautiful & delicious lunch.  I started with a duck quesadilla with mango salsa.  My entrée was the local fish special, Branzino with soy-garlic sauce; jasmine rice & bok choy.  Now I have no idea what Branzino really is.  It had a slightly fishy taste that was toned down with the sauce; I thought it was very good.

I ran into Debbie in the Cove; & she introduced me to her mom (Gaye) who had just boarded for a 10-day visit.  Gaye is my age; & within minutes I could tell I was going to like her as much as I do Debbie.  (Mama) Gaye was pooped having just arrived from her long flights from Cape Town, South Africa.  I look forward to meeting up with her again.

I went back & gathered up piles of dirty laundry.  It was a little busy in the laundry room; & only one machine was open.  So, I had to do 2 loads in the same washer & dryer.  Then there was ironing to do.   You can usually pick up some interesting news when you hang out in the laundry.  Peggy came in to start a load while I was ironing.  When I finished, I knocked on Celeste’s door since I was walking right past it.  They had just gotten back from the tailors; her heel spurs were killing her.  She showed me some more of her photos from yesterday.

I came home about 6.  I was pooped by the time I got everything put away.  Lifeboat drill was to be at 8pm; but I was going to play hooky again.  My muster station is still in the Hollywood Theater; but now I’m in boat #8 instead of #7.  So, I know I’m to report to the back of the theater instead of the front.  I think I can manage to do that without a practice run today.  I promise I’ll go the next time in Osaka.


I went over to the ‘other side’ & handed Liz my dinner order; she brought it about 7:15.  It was an excellent dinner tonight.  The appetizers looked so good; I had to try 2 of them.  I started with fire cracker shrimp, 2 ginormous prawns, battered & fried with a sweet chili dipping sauce. 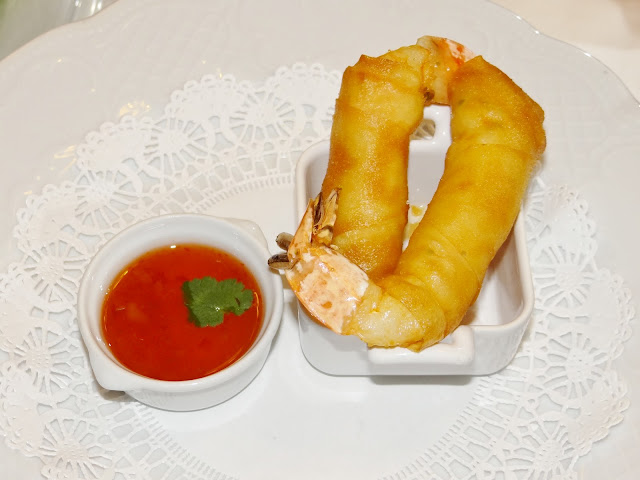 Then I had shaved parma ham with a crostini with warm goat cheese, accompanied by cardamom fig jam.  I am indeed a sucker for pretty appetizers. 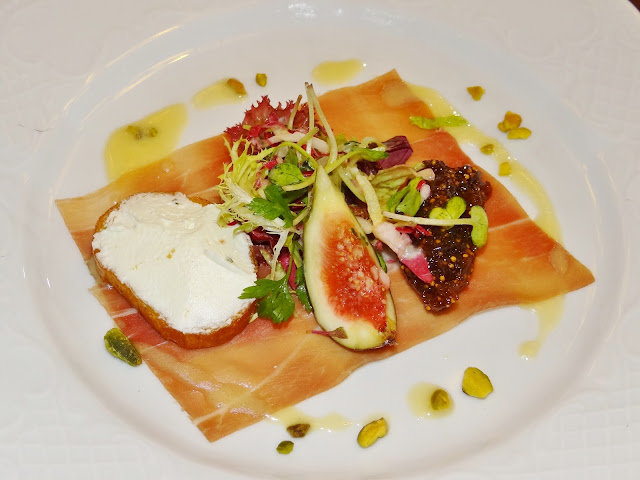 I also had a salad of Boston lettuce, tomatoes, artichoke hearts & olives with blue cheese dressing. 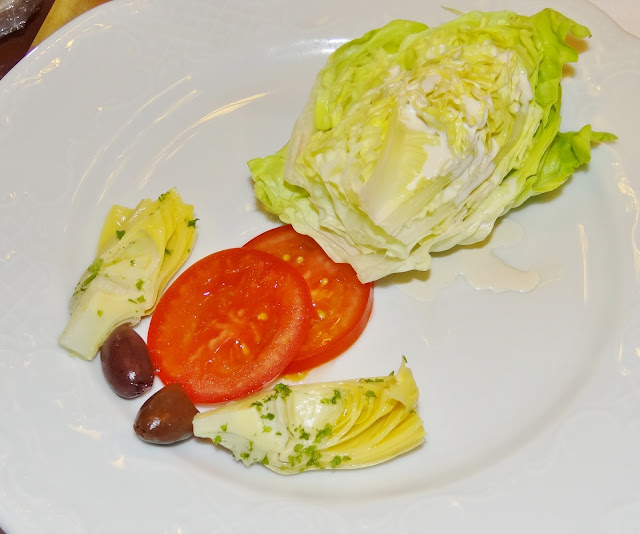 My entrée was Hong Kong stir fried mango chicken with fried rice & spring peas.  Sufficiently stuffed, I did a little typing on the blog.  Tonight at midnight, Capt. Glenn will once again move the ship.  We will have to leave our berth at the container shipping port; & go back to anchor in Junk Bay.  I hope tomorrow somebody can find out why we had to do all this moving around. 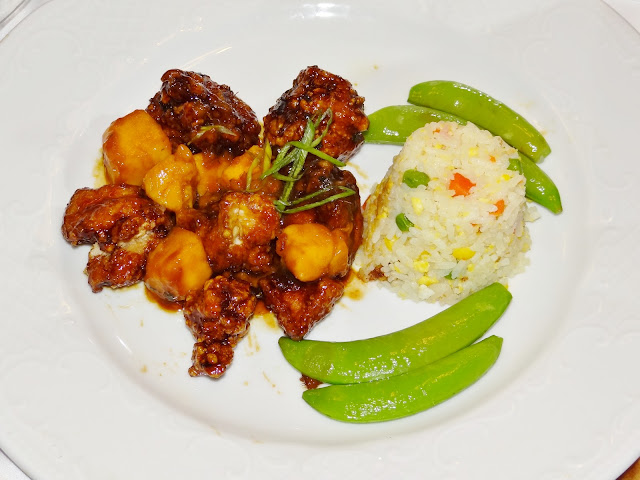