Today we made our 2nd substitute South Korean port, Jeju Island.  Since I had a morning tour, I set the alarm for 7:15.  I was thrilled to step out on the balcony & see a beautiful blue sky & 51*.  This day had potential; & I was looking forward to going ashore to explore. 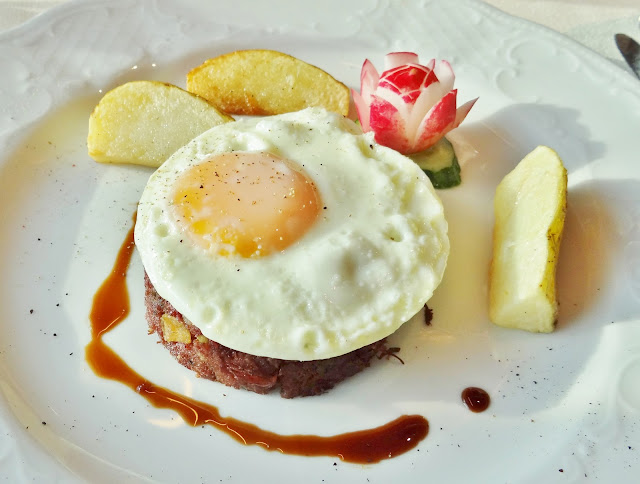 There was even time for breakfast in the dining room this morning. Homemade corned beef hash, eggs over easy, home fried potatoes & grape juice.  I was just finishing breakfast when Capt. Glenn announced that the ship had been cleared & gave his thought for the day..... “If you think education is expensive, try ignorance.” 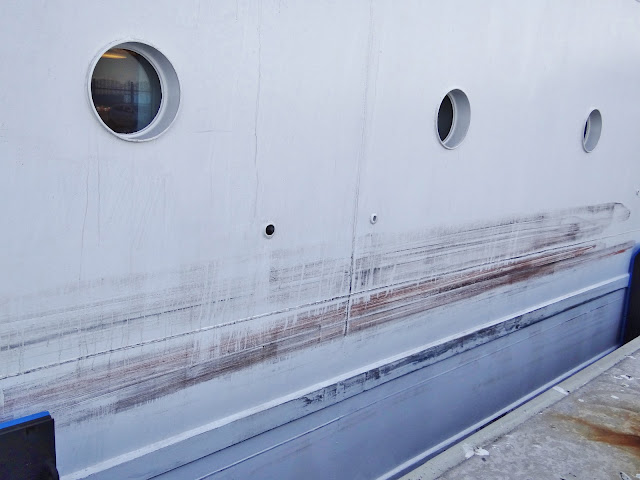 Today’s tour was called “Spirited Jeju”; it departed at 8:45 am.  I noticed as I walked alongside the ship heading to the bus, that there was a long black scrape on the ship’s port side that I hadn’t noticed before.  Wonder when that happened; looked painful. 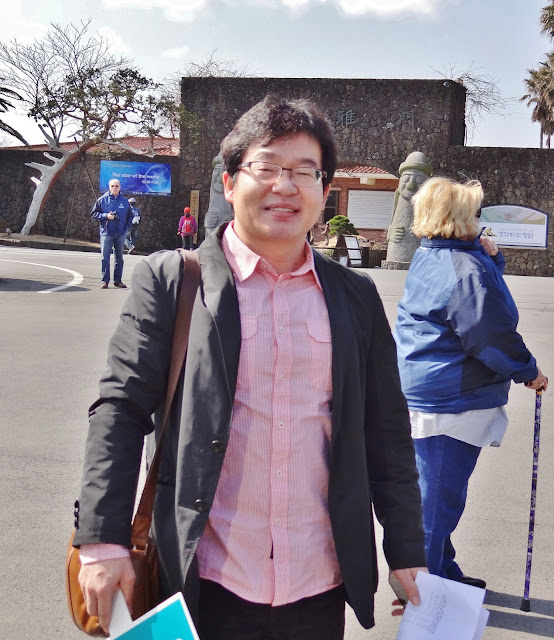 James had reserved a seat for Celeste & Bill on bus #6; so I climbed aboard. Our guide’s name was Peter.  (Dance Host) Al was our escort; & Lianne  came along to keep us entertained & to take photos. 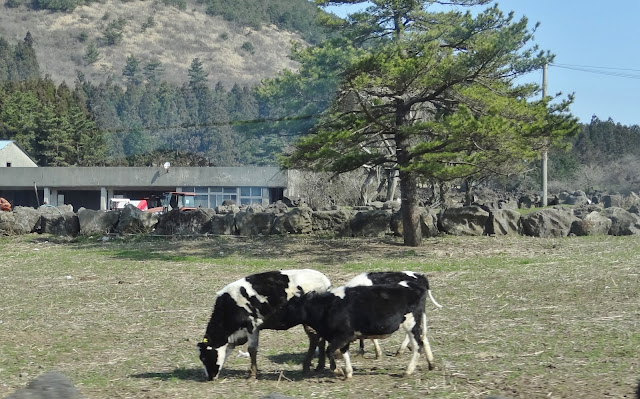 Not expecting to be here, I had no advance knowledge of Jeju Island. Peter explained that it’s a popular spot for vacationing Koreans, 53 miles south of mainland South Korea.  Its origin is purely from volcanic eruption; & its home to approximately 580,000 residents.  This is predominantly a matriarchal society which goes back to the days of the ‘sea women’ who were the breadwinners.  They provided income for the families by free-driving (as in without any scuba gear for as long as 8-9 mins.) to depths of 60’; harvesting seaweed, abalone, conch or other valuable fruits of the sea.  Today there are less than 5,000 ‘sea women’; & over 65% of them are over 60.  Whew......let me catch my breath!

Peter also explained that there is almost no crime here.  Payroll taxes are high, 9-10%; but everyone gets a pension at age 65.  And they only have to pay 3-5% of their hospital costs. 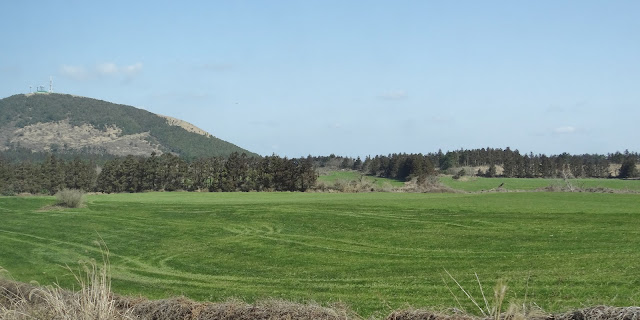 Our drive took us out of town into the countryside.  We passed several horse & cattle farms, groves of tangerine trees, & some of the most beautiful grassy areas (reminded me of tall Kentucky bluegrass waving in the breeze). 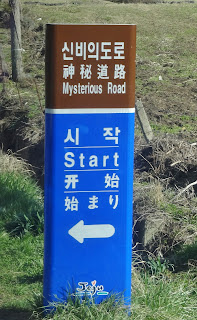 The first ‘attraction’, we didn’t even have to get off the bus for.  We approached a small community; & noticed lots of people pulled off to the side of the road.  This is known as the ‘mysterious road’. Mysterious, because the road clearly looks like it’s going uphill.  Our bus driver stopped, turned off the engine at the bottom of the hill; & our bus slowly ‘coasted’ up the slope. There were also children standing in the middle of the street, rolling balls up the hill.  They explained later that it is an optical illusion; & a photograph can’t really capture it.  But I tried.... 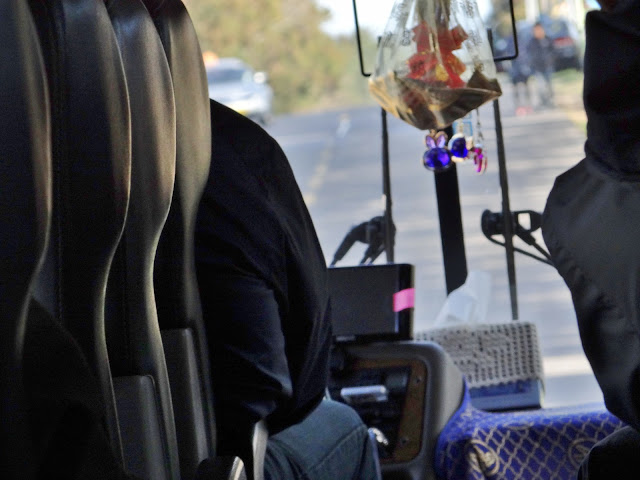 We passed through several cute small towns on our way to The Spirited Gardens (a rather small but exquisite garden of bonsais, waterfalls, koi ponds & lava rock sculptures.  There was not a cloud in the sky, & the sun so warm. You really only needed a light sweater (although we all brought our jackets). 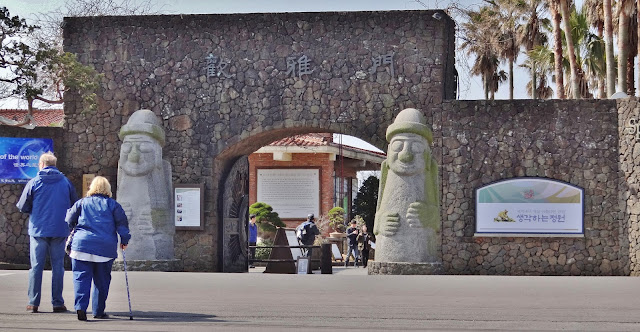 We were all enamored by the intricate bonsai & were not able to keep up with the pace of our guide.  We only had so much time there; but it is a place where you’d really like to just sit & study everything while listening to the moving waters. 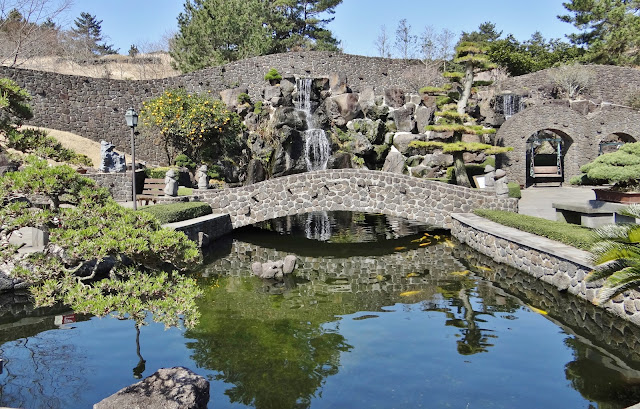 Even though it was early in the season, there were some beautiful cherry blossoms & red camellia bushes in bloom.  Celeste & I found an old fashioned swing in front of a waterfall.  We parked; & decided we wanted to spend the rest of the afternoon there. 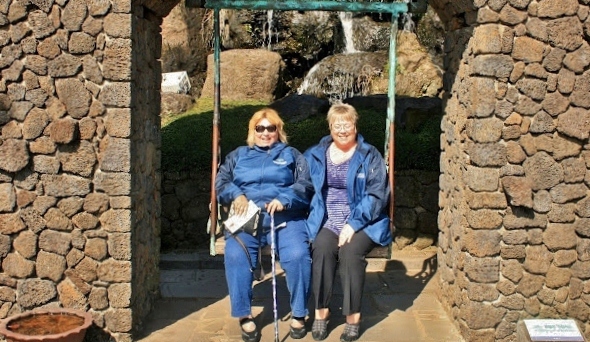 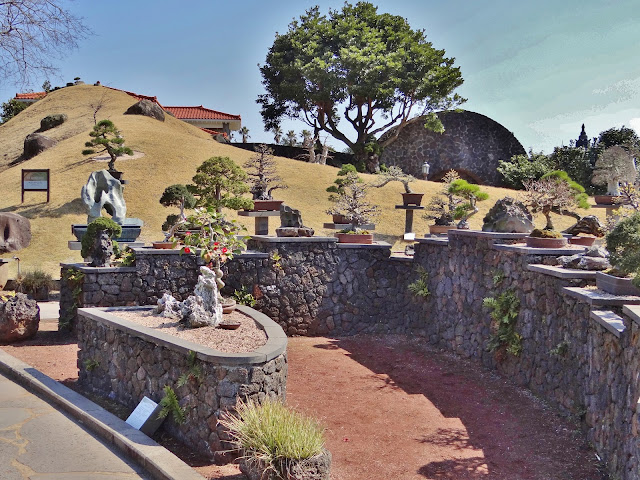 As we got close to the end of the walk, we came across a stand selling prickly pear cactus taffy.  We sampled it; & it was quite good.  Had to buy some since it said on the package that it was ‘healthy food’.  Celeste loaned me some SK won ($4.25 USD or 5000 won) to buy a bag.  I don’t know what happened; but I ended up with no change back.  I didn’t drop it, it wasn’t on my person or in my bag; & the young lady swore she gave me the proper change.  We pleaded our case (the change was going to be the guide’s tip money); but she clearly was not going to do a register check or relent.  She may have been thinking, ‘cheapo tourist trying to say I swindled them’; I don’t know. 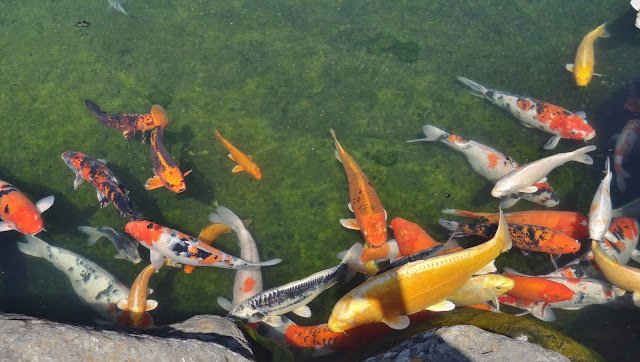 I think Celeste, Bill & I were the last to leave the garden.  Celeste decided to backtrack through the building & use the restroom; Bill & I continued toward the gate.  Lucky for Celeste, our only way out was by walking through the koi pond on some (not so large) stepping stones. Subconsciously, I wasn’t that sure footed.  Once back on the bus, I gave all the ‘cool people’ a sample of the taffy.  None of us felt guilty because it was so healthy. 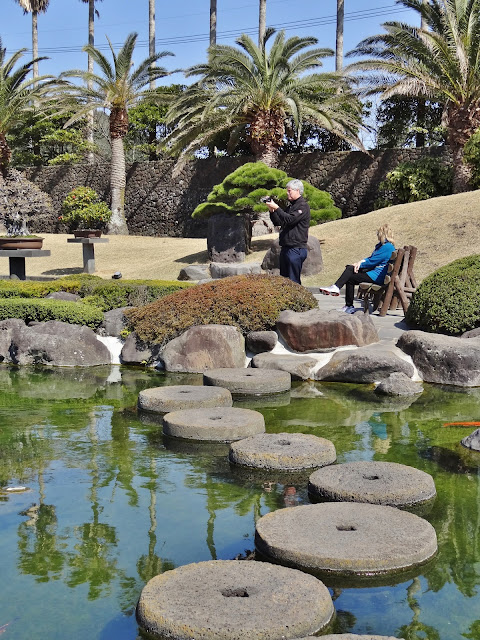 The last stop on the tour was at the O’Sulloc Tea Museum (which from above was supposed to be in the shape of a tea cup).  There was a short uphill walk from the parking lot across the road.  It struck as very funny that the background music that was playing as we got closer to the building was (the elevator-music version of) Led Zeppelin’s Stairway to Heaven. 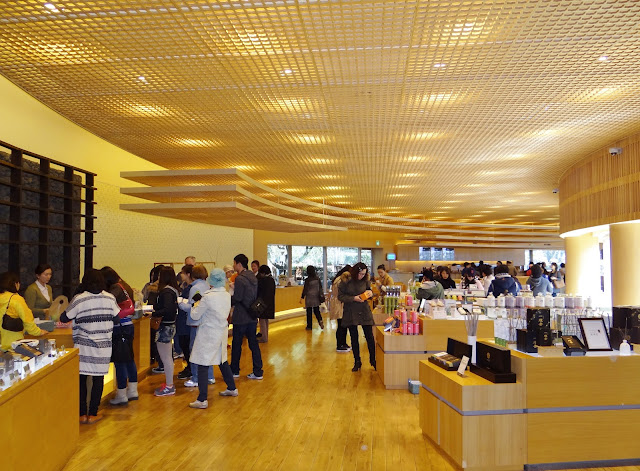 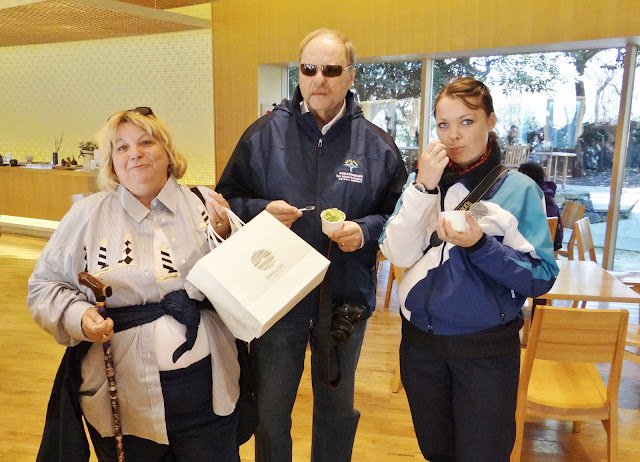 Not being a true tea aficionado, I wasn’t that into seeing vats of loose tea leaves, watching the tea brewing process or an international collection of teacups.  There was a refreshment counter where you could buy cups of tea, green tea ice cream or green tea ice cream roll cakes. There were quite a few young families seated; & it was fun watching those adorable children lapping up the ice cream.  Celeste, Bill & Lianne all got some of the ice cream, which I tasted but was not fond of. 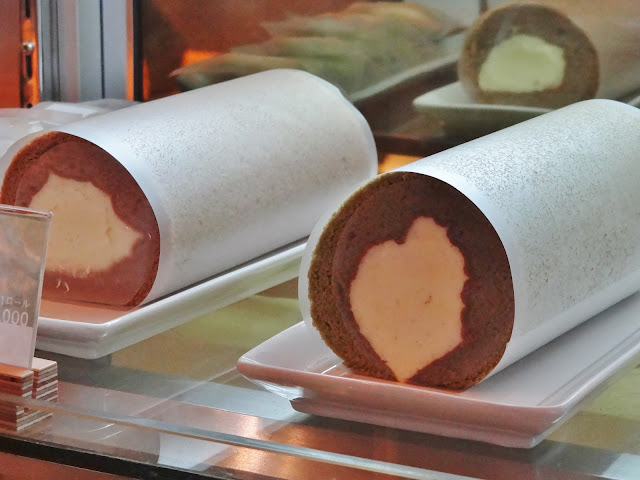 I will say the tea museum was an interesting adventure.  When you left the building heading back down to the parking lot, you had to walk over a swinging bridge.  Celeste, who takes every step precariously since her surgery, was not real pleased. 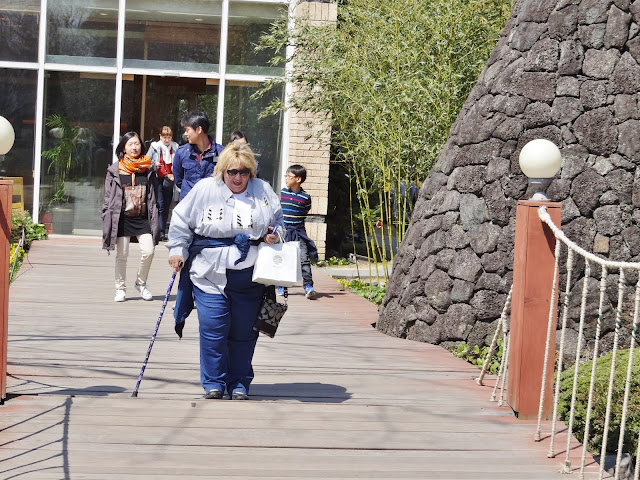 During the ride back to the port area, I again took notice of unusual architectural features & use of roadside touches of ‘decor’. 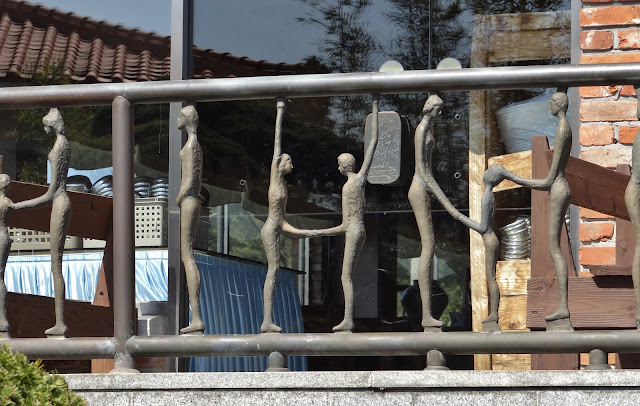 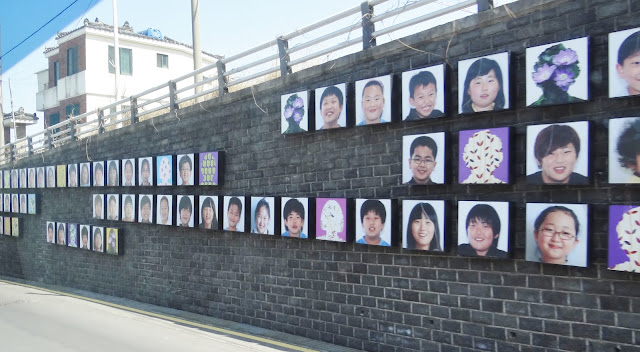 A photo gallery on a retaining wall along the highway

We arrived back at the ship at 1pm; & the three of us went straight to the dining room for lunch.  For an appetizer I had golden fried Camembert cheese with lingonberries & tossed curly endive greens.  It was a wonderful blend of flavors. 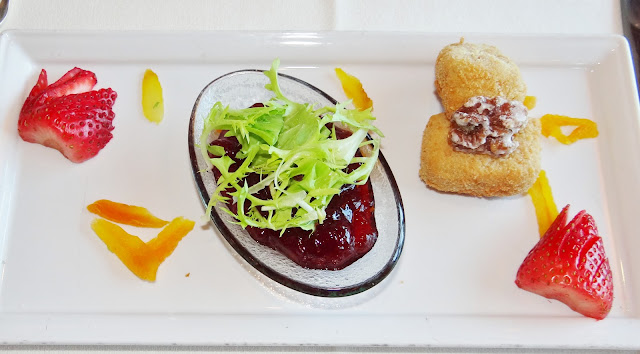 I then had a cup of the Yuk Gae Jang, better known as Korean spicy beef & vegetable soup.  Hearty flavor with just the right zing to it.  My main course was a seafood gratin; consisting of a crab cake, a scallop, 3 mussels & a piece of fresh fish in a white wine sauce on a bed of potato puree.  It was accompanied by fresh veggies & a mustard-chive hollandaise sauce.  All the seafood was juicy & cooked to perfection.  I think we were all stuffed, with tired feet. 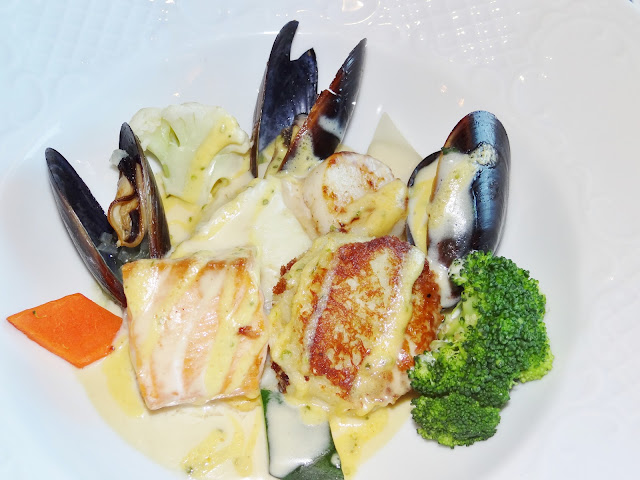 I went back to the cabin to read & napped for a few hours.  I went out on the aft deck just before sailaway at 6pm.  By this time the sun was going down, the wind had picked up; & it felt quite cold. 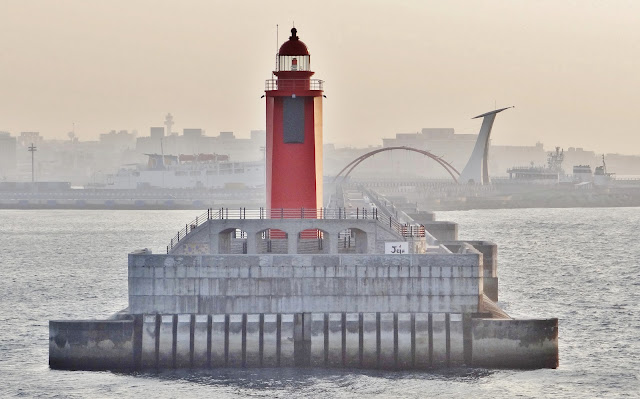 I went back to work on the photos for a while.  Liz brought my dinner at 8.  My starter was creamy tomato soup with sliced ginger, basil & garlic chips. Awesome! 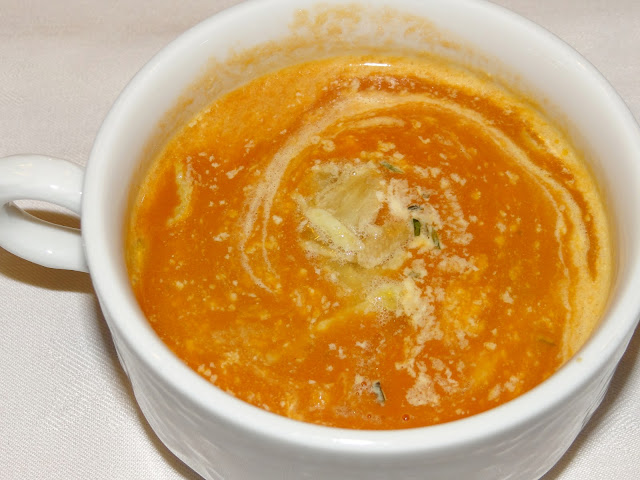 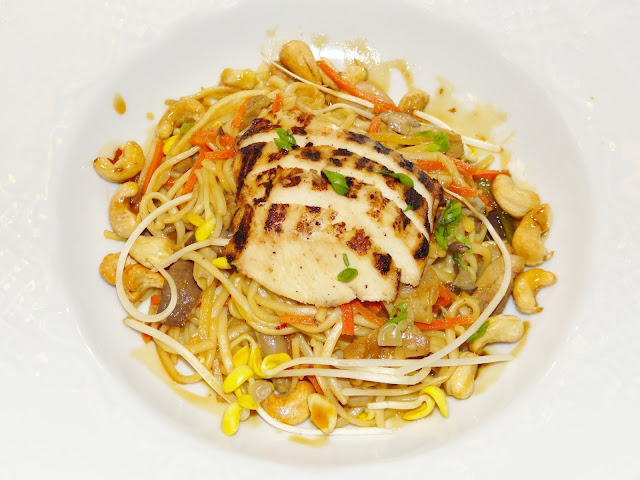 The last day in Beijing I noticed a red spotty rash down around both ankles. Now it’s beginning to creep up toward my calfs.  I’m going to search my well stocked medicine cabinet for something to rub on it. What on earth have I gotten into?  Since I had a nice refreshing nap this afternoon, I was able to work a long time on the photos tonight.  But the eyes are weary, so it’s lights out at 3 am. 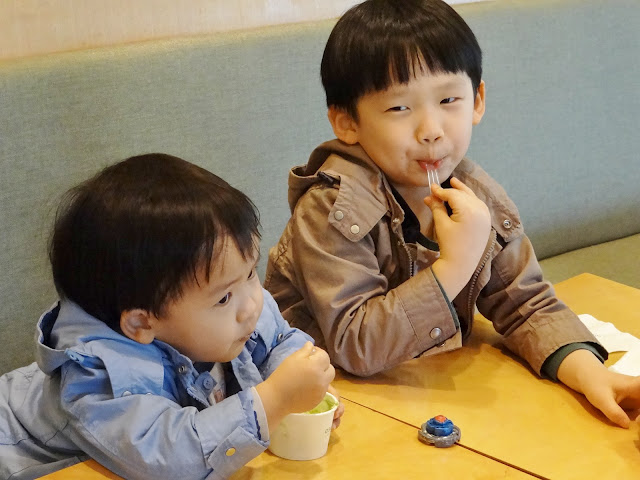 She most defintely swindled you and played dumb!