I finally dragged myself up at 8:45.  It’s sunny outside, but cold 38* with a northerly (head) wind of 40 mph.  According to Capt. Glenn’s morning report we are cruising at 18 knots (20 mph).  China is just off our portside; & Korea is off our starboard.  His thought for the day…..”Cooperation is doing with a smile what you have to do anyway.”

Up to the Bistro about 10 am for some hot chocolate.  (Mama) Gaye was there; & we had a nice long chat.  Fate is funny sometimes.  To think that I got so attached to Debbie because she was nice enough to bring me some fruit back to the bus after a ‘happy stop’ in Java.  We continued to bond during that horrendously long, hot day in Borobudur.   And now to meet Gaye, who is every bit as sweet as Debbie.  Just hearing some of their stories, the whole family sounds like they’d be fun.  I’ve asked; & I sincerely hope they can come to Naples for a visit.  And of course, if I ever happen to be in South Africa……….

I finally made decisions about tours for Osaka & Petropavlovsk; so went down to ShoreEx to book them.  Today was the ever popular Asian themed lunch buffet up at the Lido.  I fixed a plate of my favorites; & took it home.  I had a spring roll, steamed dumpling, sushi, spicy orange chicken, sweet garlic eggplant (my all-time fave), beef & broccoli with oyster sauce, lo mein noodles, duck & lychee salad, Filipino chicken with rice noodles, & Cantonese shrimp.  All delicious. 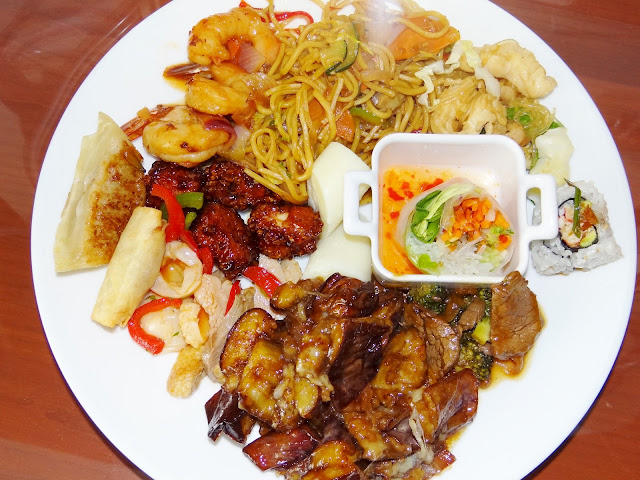 I watched the replay on TV of Regis Philbin’s talk & Jim Brochu’s presentation on his friendship with Joan Crawford.  Both were excellent.  I was also trying to get some blog work done; but I was having trouble with the blogger software. 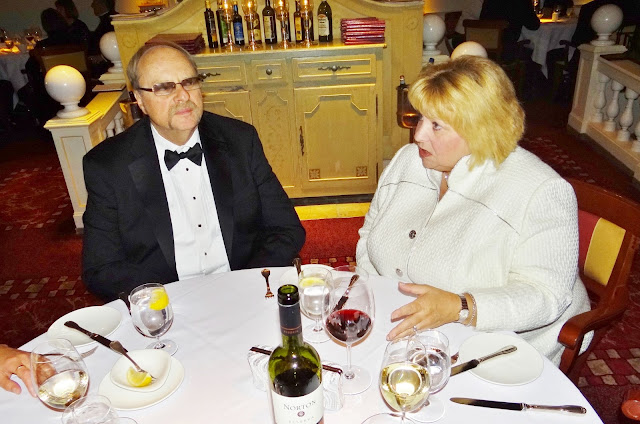 Tonight was my special dinner in Prego with the kids from ShoreEx.  Last minute glitch…..Jelena called & said there was a crisis so she & James couldn’t make dinner.  There is so much to do in preparation for the 3 day overland in Beijing, that it was impossible to let the entire department have the night off.  Bummer!  So, I promised a ‘rain check’. 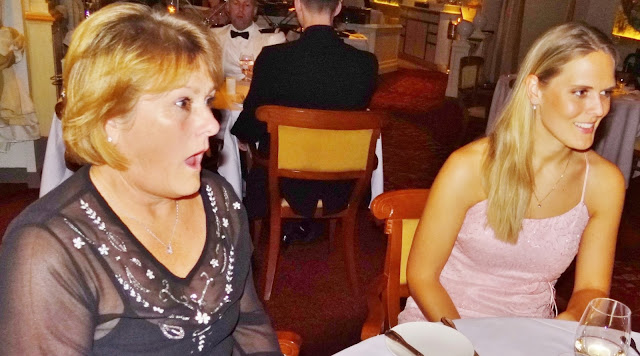 It was a busy night in Prego with Paula Jean (onboard cruise consultant), Jacque (Crystal Society hostess), Neil (head photog), Johann & Melanie (concierges) all having a great time at a table close by.  Our special group consisted of Celeste & Bill, Darko, Debbie & Gaye.  We had so much fun.  It was formal night; & Celeste was debuting one of her custom made outfits from HGK.  She looked really pretty all in white & silver. 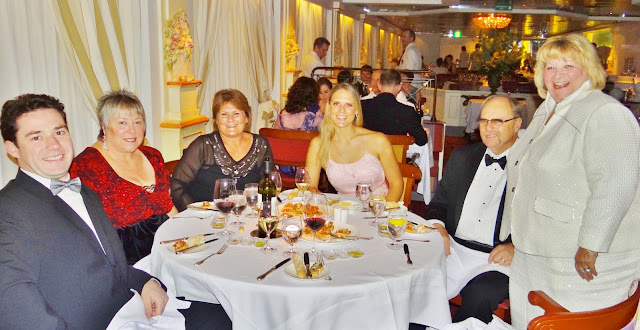 It was nonstop shenanigans during dinner.  Darko with his quiet, off-beat sense of humor; & then the rest of us somewhere this side of insane.  A couple of bottles of wine; & we were pretty ‘jovial’.  I asked for a large platter of bruschetta, which everyone fell in love with.  They didn’t even know that you could request it; but this is Crystal after all. 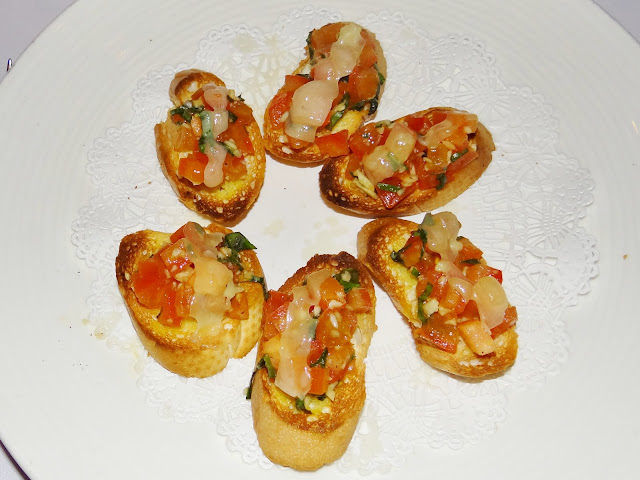 I had the seared sea scallops appetizer as I normally do.  A few others opted for the beef Carpaccio, which looks really pretty once it’s dressed with all the optional oils, sauces & cheese. 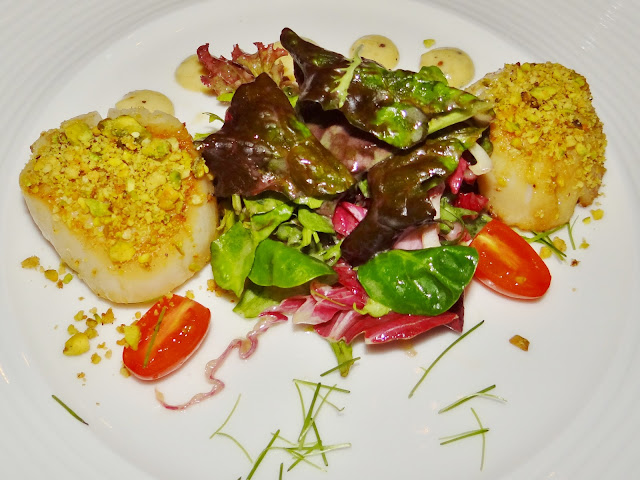 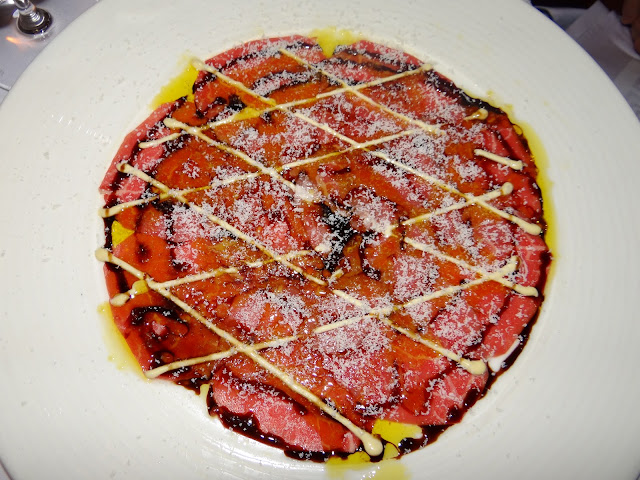 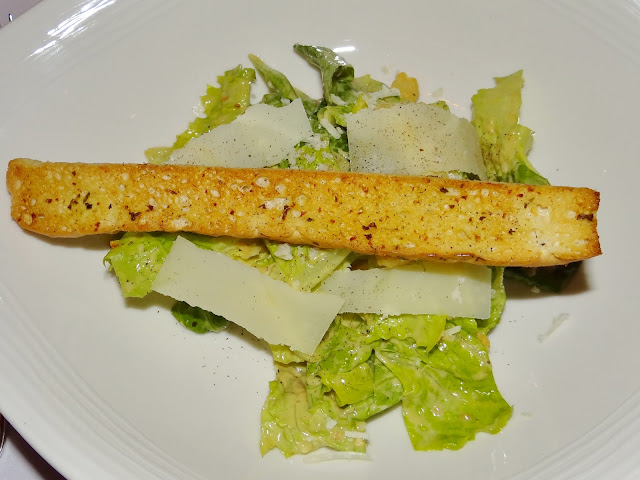 I always have trouble deciding on the main course from the regular Prego menu because everything is fabulous.  But tonight I went with the lamb chops with gnocchi & roasted vegetables.  It was to die for. 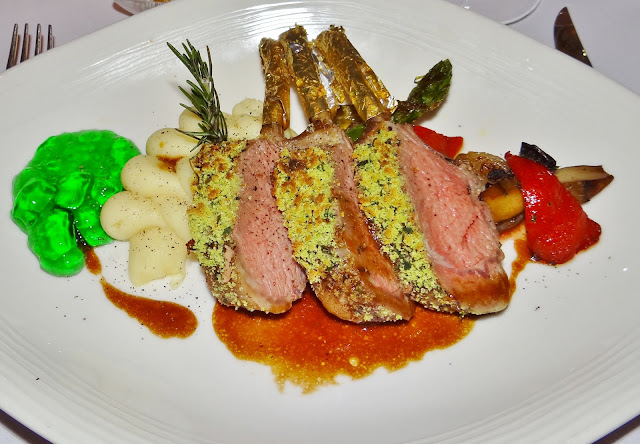 During dinner Darko kept talking about karaoke in the disco, a popular formal night entertainment option.  Debbie was telling us that he’s a really good singer.  Everybody wanted to go, well except for me (early tour tomorrow).  I know….. It had been a rather quiet sea day; & I hadn’t overextended myself today.  I don’t sing; & I don’t dance (well, except a little ‘chair’ dancing occasionally). They begged & begged; & I guess the wine was what did it.

It wasn’t exactly happening in there tonight; it was a little early.  The majority of participants were the Asian guests who think of karaoke as their national pastime.  Darko sang a solo & a couple of duets with another passenger.  Celeste was in the mood for a little Motown; & chose “Stop in the Name of Love”.  So all us girls sang back up for Debbie (who was the only one who had the balls to actually stand up on stage & sing).  The rest of us kept our seats on the sofa & continued to look foolish.  All in the name of fun.


At 12:30 I called it a night; so everybody else did to.  It was a great evening; & I actually did enjoy going out for a change. 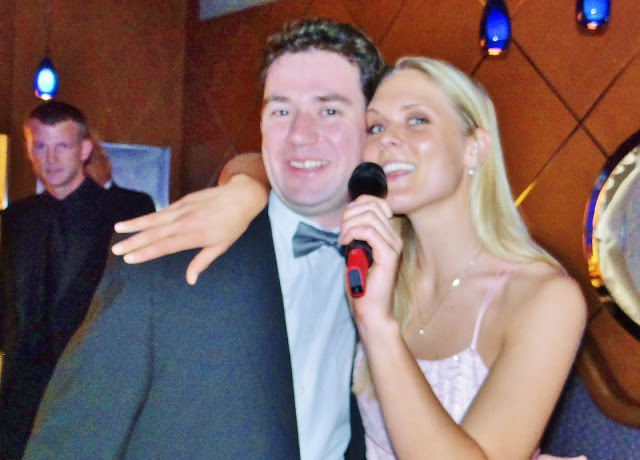 You look lovely in red! And I kept trying to get a better look at your earrings. Very pretty! Do they have red in them too? So glad you went out! Sounds like you had a ball!

Yes, they do have a few red stones, but predominently clear. A great find at a costume jewelry store called "Charming Charlies".....$10.00!

So glad the rumors of your demise were exagerated! We will try to be patient :)