I was awakened about 5:30 by the ship’s movement.  There was a strong ‘shimmy’; so I turned on the TV to see what was going on with the weather.  The winds had whipped up to 37 knots (42 mph).  Normally, this would lull me right back to sleep.  But this interruption of sleep sent my mind racing about that list of travel details & decisions that needed to be made in regard to my staying on the ship past Hong Kong.  So, I got on the computer right away trying to change my domestic flight schedule.  I have flights on Continental booked through Travelocity.  Neither website would allow me to change my reservation online.
I dressed & went down to the Concierge desk & to talk with Johann about my airline ticket problem.  He said he’d be happy to call the airline on my behalf once I make the decision when I want to leave LA.  So, I got to the Bistro just as they were opening at 9; had my usual morning fare.  Enjoyed a quick chat with Keith & Anne Marie; & later Betty & Kris stopped to inquire about the electrical adaptor that I was using for the computer.  I had found this small, self-contained multi-country adaptor/converter plug at Target before I left home.  It’s about the size of 2 decks of cards; & I carry it in my Crystal bag just in case the computer starts to run outta juice while I’m about the ship.  I can plug it into their 2 prong plug; & plug my electrical cord right into that.  She was going to be on the lookout for something like that ashore.


Capt. Glenn reported that it was a balmy but cloudy 66* outside, 13 knot (15 mph) winds.  He informed us that we should be outside between 3-5 pm as we start the scenic cruising of Ha Long Bay as we approach our anchorage at Hon Gai.  There will be over 3,000 small karsts (or ‘piles’ of rocky mountainous islets) scattered all around the waterway.  With the help of a very skilled local pilot, the ship will slowly maneuver around these on our way to the port.  I’ve seen photos; & I can hardly wait.  Capt. Glenn’s thought for the day…..”A change of habit is too weak to be felt until they are too strong to be broken.”


At 10, I attended the Photoshop class on cloning; fun new skills to have.  Then it was off to the lounge to have my temperature taken with a device similar to a ‘radar’ gun.  Obviously Hong Kong prefers their tourists be healthy prior to arrival.  The ship had set up a quick & efficient system for doing this in the Starlight Lounge; in & out in about 3 mins.  Next I went back down to the Reception Desk to check some more of these tedious details off the list.


I checked with Ane to see if there was any more info on the visa process when we arrive in Hong Kong.  The Clearance Office has somehow worked her magic; & I will not have to appear at the Embassy after all.  I can proceed with my planned shore excursion on that first day.  BUT, I cannot take the tour to Macau, even though U.S. Citizens are allowed to enter freely as long as they have a Chinese Visa.  I will not technically possess a Chinese Visa until AFTER the ship departs Hong Kong.  This is just another one of those things that’s bothering me so much.  I CAN extend the cruise; BUT I won’t know for sure if I have the proper visas or whether I can get my medication until the end of the 3 days in Hong Kong.  (As in don’t tell me I can; & then banish me in HGK without a hotel or airline reservation home!)


I checked back in with Johann who had some good news for me from Luggage Concierge.  As a perk of becoming a full WC’er, I was entitled to an additional $500 to go toward the cost of shipping my luggage.  Since I had arranged this service on my own & paid in advance, that means a welcome credit to my charge card.  (Reverse ca-ching!!!) 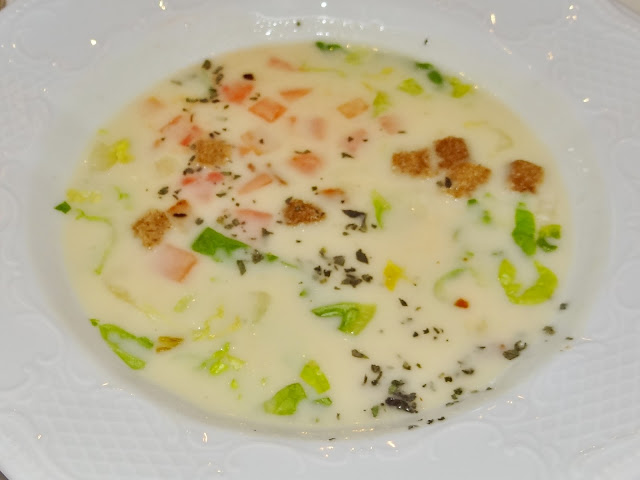 I sat in the Cove & pondered the tours offered in China.  So many people book their tours online before they leave home, the ‘good tours’ may already be limited.  Celeste & Bill saw me sitting there; & asked if I wanted to have lunch in the D.R. with them.  I decided to give my brain a rest, knowing that a few hours of insanity with Celeste (said lovingly) would do me a world of good.  I had a great lunch of BLT soup & a juicy hot pastrami sandwich with a little taste of the grilled eggplant & zucchini lasagna on the side. 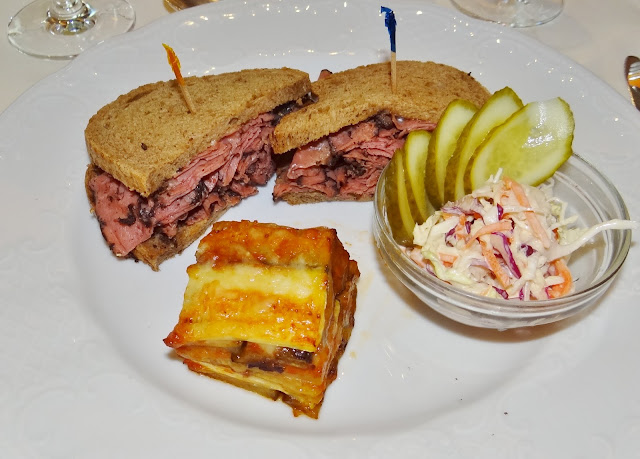 She asked me if I wanted to go back to her cabin & see some of the goodies she’s bought along the way.  Holy crap!  Shopping bags lined up against the wall; piles (albeit very neat ones) of ‘stuff’ on the dresser & sofa.  Nowhere to sit but on the bed.  My first thought was if I had this much crap to move when it came time to change cabins in HGK……I’d rather go ahead & pack to go home.  There is a joke between them that they may not be able to check this much luggage for their flight back to AZ.  They may have to rent a semi- or else box it up & ship it from (maybe) somewhere in Alaska.  Fortunately, Bill just rolls with the punches.  If your family ever disowns you, you definitely want to be adopted by Celeste & Bill.  Her grandkids are going to think its Christmas when they come rolling in with all this stuff.

Bill happened to look out the window just before 3 & said, “I see rocks”.  It was very foggy & cold; my camera battery was almost dead.  So, I ran back to my cabin, changed batteries & then sat on the verandah wrapped in a blanket taking photos.  I can only imagine what these outcroppings must look like under a pretty blue sky; but the mist & fog made it all so very mysterious & exotic.  There was a good bit of boat traffic; & there was a lot of horn blowing going on to keep everyone aware of our presence.   (And since I’m posting this long after the fact, some of you may be aware that the Silver Shadow collided with a Vietnamese container ship a few days later because of dense fog.)  For a short while the fog was less dense; but very soon it was like pea soup again. 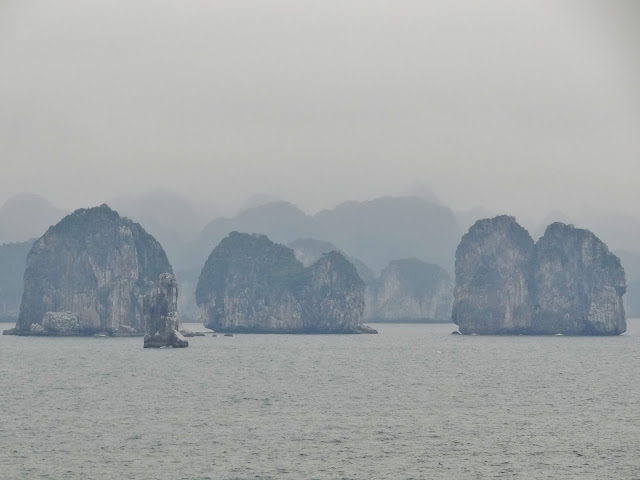 Ha Long Bay is another one of those UNESCO World Heritage Sites.  These karsts are made of limestone, vary in size & shape, wave action has eroded the base of some to create interesting caves & some are covered with vegetation.  Legend has it that the Gods from Heaven sent a family of dragons down to the “Bay of the Descending Dragon” to help the local people fight off foreign invaders from the north.  The dragons descended onto Ha Long Bay & began spitting out jewels & jade, which turned into these mountainous karsts when hitting the sea.  They provided a natural barrier against their invaders; & the local people have honored the dragon’s mercy ever since. 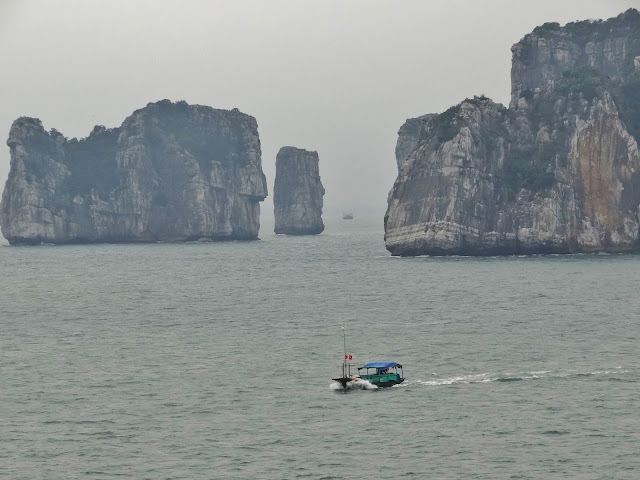 Because of the heavy fog, the ships horn would create strange echoes that bounced off of the walls.  These few hours provided me with another one of those surreal, ‘pinch me’ moments.  By 5 pm we were in position & dropped anchor just off the town of Hon Gai. 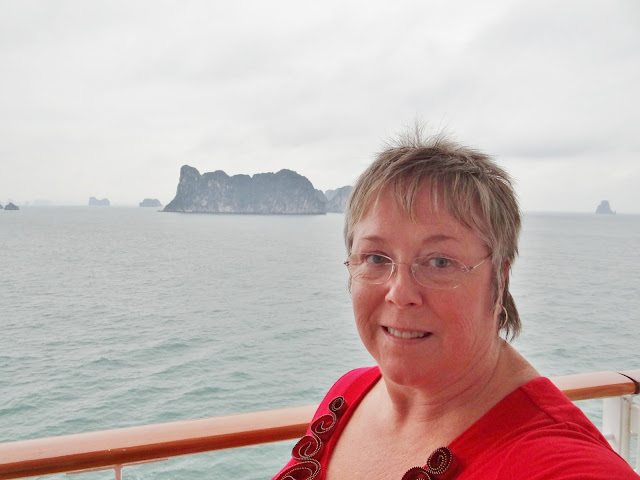 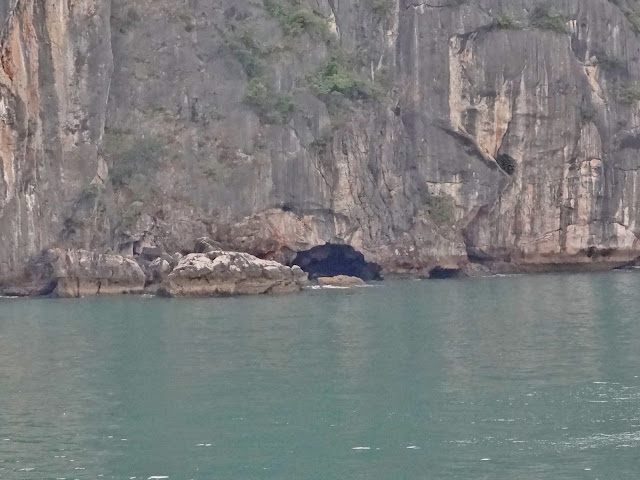 Tonight’s D.R. menu didn’t sing to me; so I scooted up to the Trident Grill before they closed to get a cheese burger & onion rings for dinner later this evening.  Yes, I know I could always order the same from room service; but the onion rings (even cold) are better when they come from the Grill. 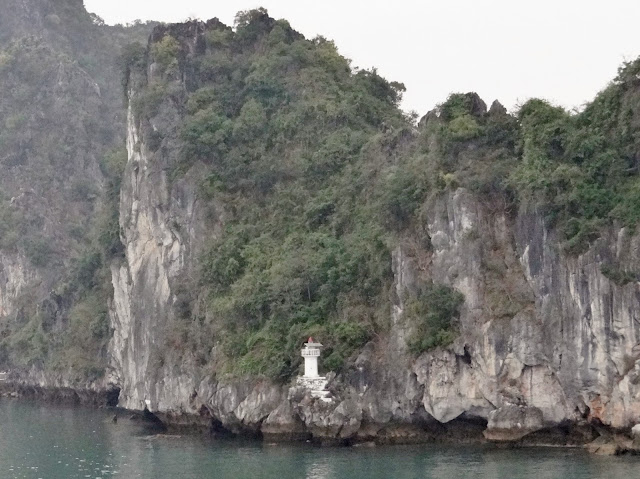 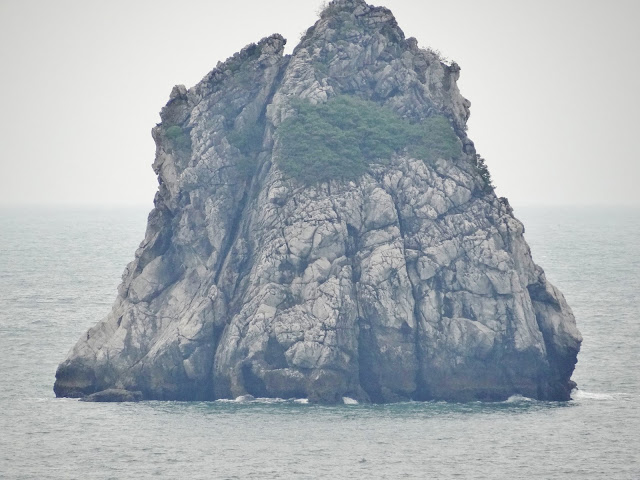 It started raining; & it made me sleepy.  So, I read & then napped for a while.  Liz called to see if I was okay & if I needed anything.  I was all set for the night; & spent the next couple of hours messing with those Ho Chi Minh photos trying to tell the difference between day 2 & day 3.  While I was working on this project I watched the replay of several guest lectures from earlier today.  I really enjoyed Dr. Rhea Seddon’s talk entitled “A Doctor in Space”.  Among the experiments that she was in charge of while onboard the space shuttle, was the study of calcium loss of those who spend long periods of time on the space station (they lose between ½ - 1% a month).  She also studied the effects of long term radiation.  She shared info that we don’t get to see watching the NASA channel; such as how the organs of the body react & adjust to weightlessness.  She showed videos of them ‘playing’ with their (free-floating) food & watching the reaction of rats when they were let out of their cages & experienced weightlessness for the first time.  Rather funny stuff.
Afterwards, I watched the talk Ken Walsh gave about the ‘behind the scene’ stuff that goes on aboard Air Force One.  I had heard this talk before; but he had some new tidbits to share about Mr. Obama’s use of the plane.  By 1:30, I was ready to pack it in.  A lot of excitement today with the sail in & eye strain from the computer.  Should have no problem falling asleep.