Up at 8; & started right to work.  Was able to get 2 days uploaded on the blog.  It’s still grey, drizzly & 58* out there.  I guess this is the way I’m supposed to remember Hong Kong.  I got up to the Bistro at 10:15 & had breakfast & capp.  I fixed 2 ham & cheese sandwiches out of croissants to take with me on the early afternoon tour.

I saw Betty & Kris in the Cove; & she was raving about the new camera (like mine) that they bought yesterday.  I showed her a few ‘trick’s I had learned while using mine the last few weeks.  I told her she should try the panorama mode on the Hong Kong skyline from the ferry.

I got on the 11:30 tender for my 12:30 tour entitled “Kowloon & the Northern Territories” (HGK-HW).  I was lucky to get the ‘cool bus’, #7.  Jim (dance host) was our escort; & we had a fabulous guide, Lilly.  Photographer George accompanied us.  (Mama) Gaye was onboard as well; & we had lots of fun chatting on the back of the bus.  We drove past the old airport, which used to be a holy terror to fly in & out of.  It will soon become the new cruise terminal; with the first berth to open in 2013.  Yea….they definitely need the space; & it’s in a perfect location. 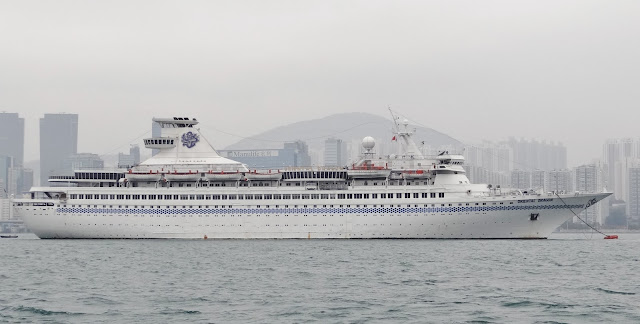 (Spotted this 'oldie' in HGK Harbor this morning...recognize the structure around the funnel?)

We passed many mid-rise buildings that had no elevators.  Some ‘old timer’s refuse to leave, planning to stay in them for 7 more years when these buildings are scheduled for demolition.  Seven years from now, they will all be millionaires.  Lilly informed us that 80% of the population uses public transportation, which cut down on the use of private vehicles but seemed to double the amount of smog. 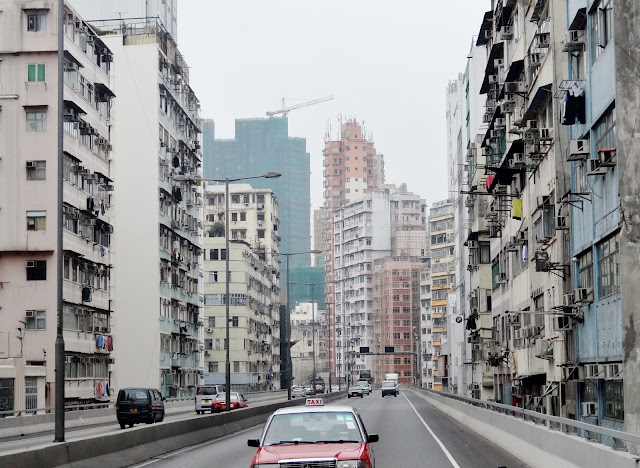 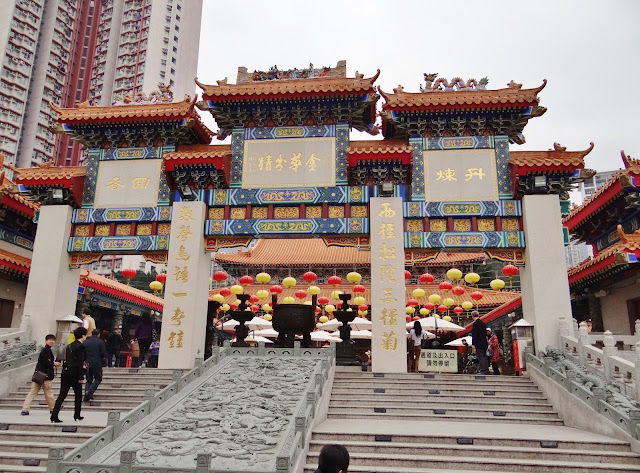 A set of stairs lead up to the open air prayer hall, where red & yellow lanterns were hanging overhead in neat rows.  There was a strong smell of incense in the air & the tinkling of wind chimes hanging from the trees. 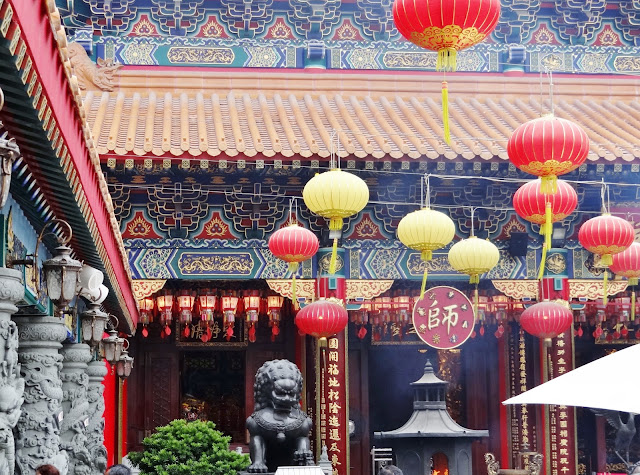 In the middle of this courtyard there were rows of padded kneelers; people of all ages were praying ‘intensely’ (like nothing I had ever seen before).  Lilly began to explain what we were seeing.  The faithful were on the balls of their feet with their knees just barely touching the kneelers.  They would bend over & then rock their upper bodies up & down, as if pleading to the Gods. 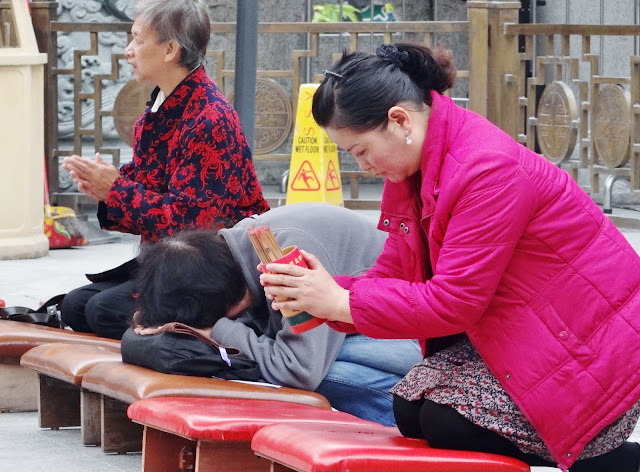 Some held cups which were filled with (what looked like) chopsticks.  They would shake them; & make this eerie noise. 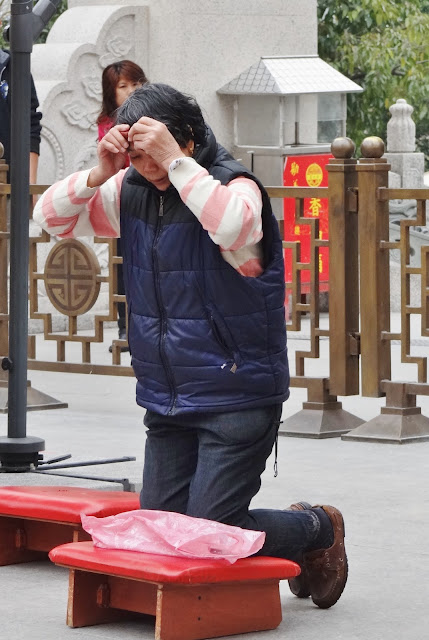 Then they would take out two small stones; press them against their foreheads; & then ask the Gods for a sign (to help them solve a problem or answer an important question).  They would drop the stones on the ground in front of them.  However the stones fell, gave them the answer they were seeking. 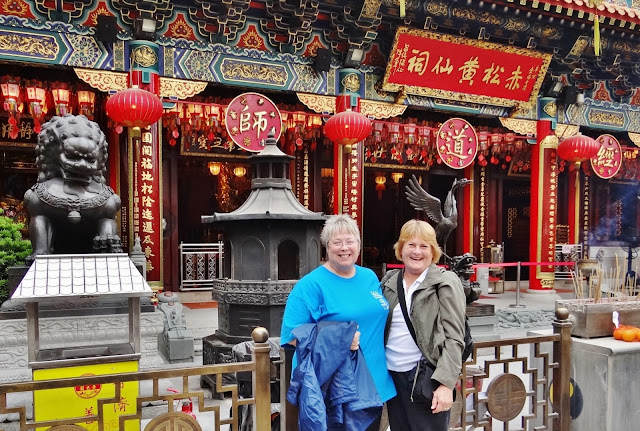 There were several side altars on each side of the courtyard where the slightly less devout went to say a short prayer & light joss sticks.  I wish there had been more time to study the intricate carvings, mosaic work & gold leaf etchings that covered every foot of that complex.  It was mind boggling! 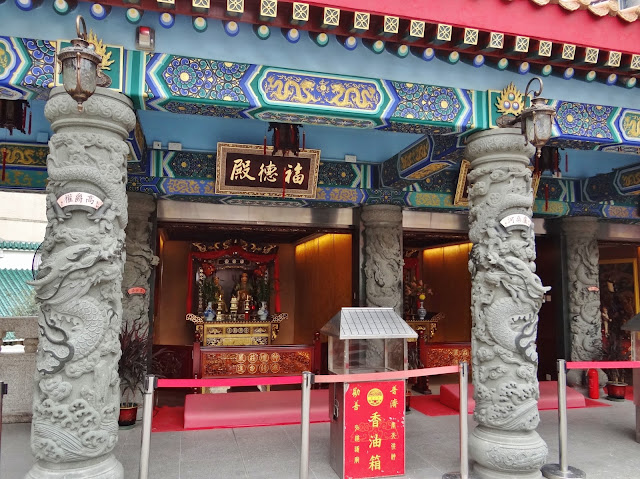 Traffic was a nightmare; & getting from one place to the next took a lot of time.  Our 2nd stop was at one of the two Tai Po Markets.  Now this was a surreal experience; & being that ours was the ‘fun bus’, we had a great time in there.  Jim (escort) was curious about everything; & on occasion purchased some unusual stuff that he shared freely with anyone who was game enough to try. 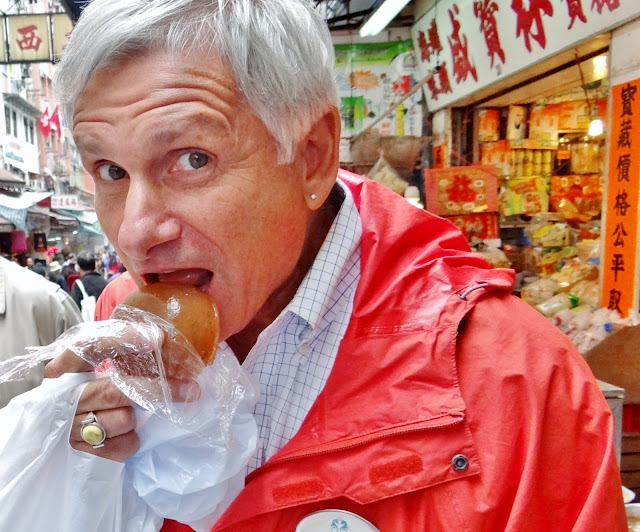 The thing we had the most fun with was a gelatin treat that made us think of silicone breast implants.  Lilly told him it was good; & he bought one.  We all waited for some reaction; with a straight face he said it was good.  He gave George (photographer) a bite; George didn’t know what to say about it.  I made (Mama) Gaye take a bite before I did.  The look on her face says it all.  I never tasted it. 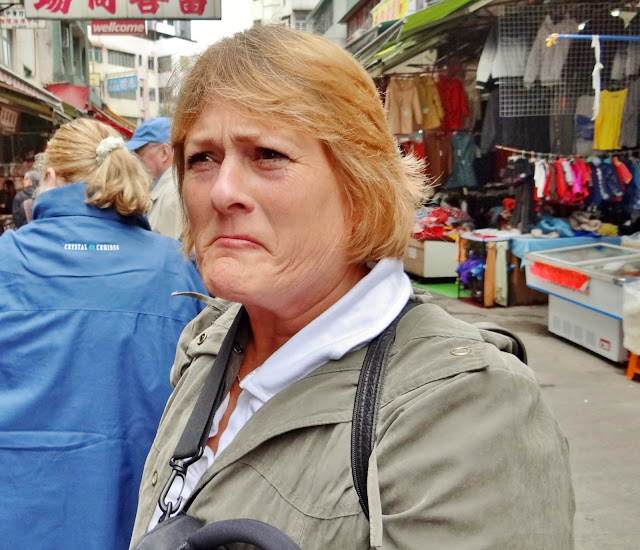 Halfway through our walking tour of the market, we stopped in to visit the Man Mo Temple.  It is quite small, meant to serve only the people of the small community of Tai Po.  At the back of the temple, there were dozens of huge cones of incense hanging from the ceiling.  Family members come, purchase a cone, tie a red ribbon on it with the name of a loved one & light it.  The cones will burn for about a month.  The smoke & smell was overpowering; & some of us began to cough & had to leave. 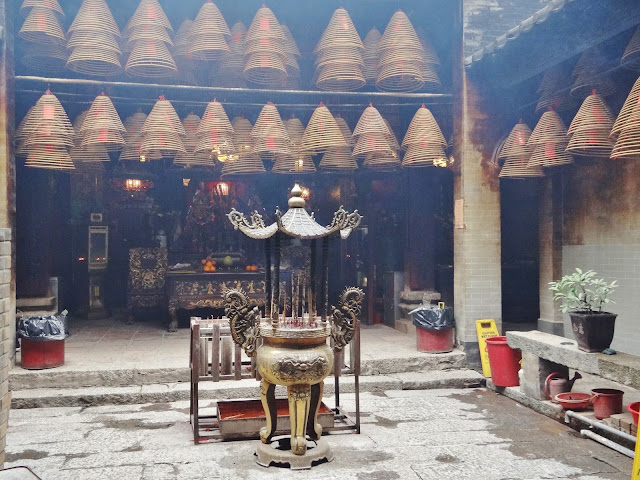 We entered the market again, this time in the butcher area.  I say with great confidence that there is no part of an animal that goes to waste in this country.  Poor Lilly; we were constantly pointing to stuff & asking ‘what’s that?’.  How about stomach & pancreas?  Or lungs?? 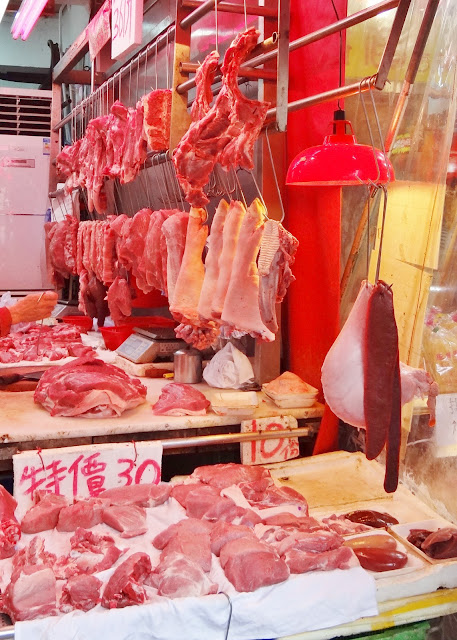 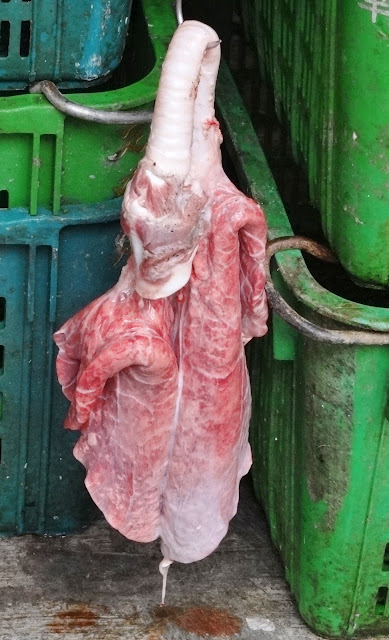 We saw pretty repulsive looking things that came from the sea, as well. 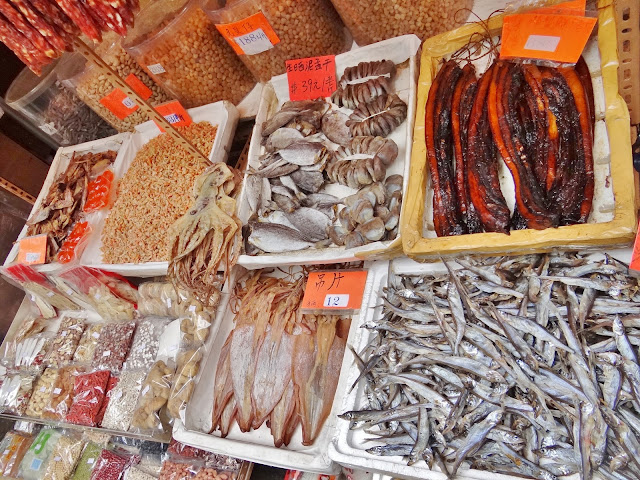 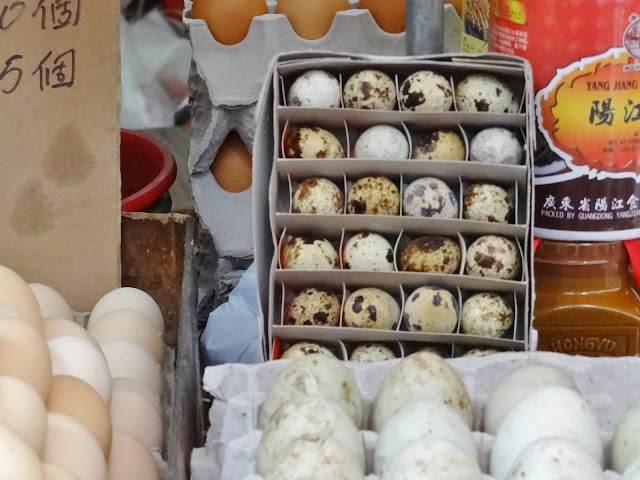 The normal looking fruits & vegetables were beautiful however. 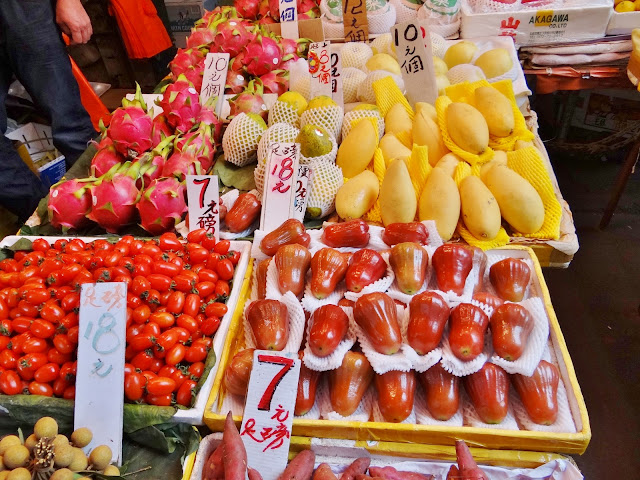 Our last stop of the day was the Lau Ma Chau Lookout.  This is the part of the tour description that I missed.  We had to climb a very steep hill to get there.  I personally thought I was going to have a stroke.  I made it up about 5 mins. after the rest of the group.  From this lookout point you can visibly see the wire fence that separates Hong Kong’s border from Communist China.  There is a checkpoint that road traffic has the pass through. 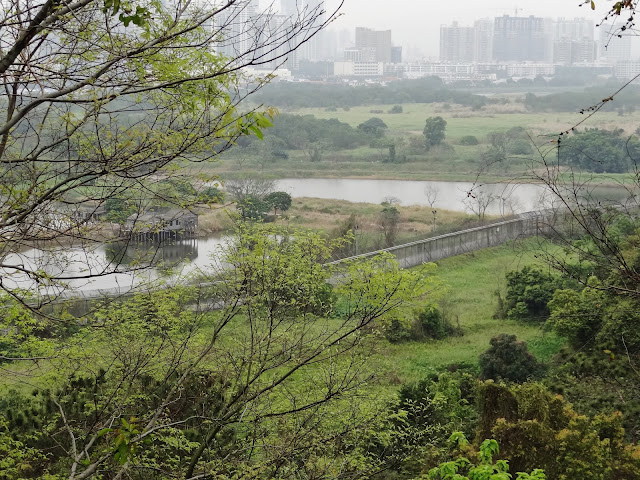 There are a few burial sites up there; not sure why the headstones are facing in the direction of China.  There were earthen urns that held the ashes of several members of the same family.  (Photographer) George climbed down the hillside to take a photo; & I took a photo of his photo. 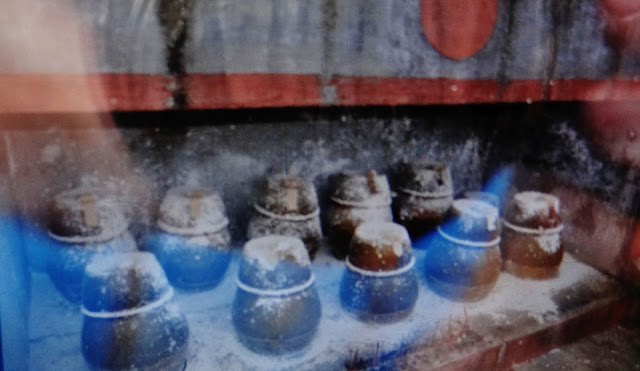 The long ride back across to Kowloon gave me a chance to look one last time as the fabulous buildings that dominate the Hong Kong skyline.  So many of them have jumbotrons on top of them and/or electronic billboards.  Every night at 8-8:15, there is a light show; where many of the buildings synchronize their decorative lighting & put on a visually stunning show.  I really intended to take the 7:30 ferry back into town just so I could videotape it.  But as the sun was setting, it was getting frigid cold outside.  I knew once I stepped back on that warm ship, I’d never go back out again.  Not even for that. 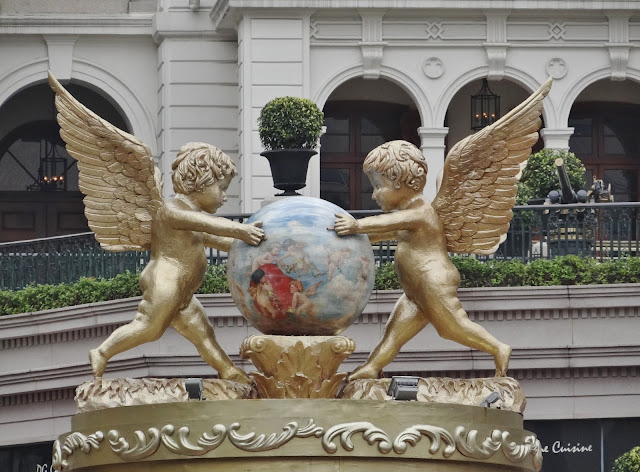 When our tour ended, we had about 15 mins. to kill before the 5:30 ferry back to the ship.  Gaye & I walked down the street so I could get a better shot of some fun stuff we spotted next to the Peninsula Hotel.  By the time we got on the ferry, it started to get foggier.  Even though it wasn’t exactly cold; the humidity was high & the fog & wind made it much colder than what I was dressed for.  I was so happy to be home.


I stopped to check with Johann about my Chinese visa; & was happy to learn that it had been approved & my passport was back in the custody of the ship.  Whew!  I got a hot shower; & ordered dinner.  As an appetizer, I had a half portion of the pasta special which was mafaldine pasta with chuncks of braised veal shank, root vegetables & mushrooms in a tomato-herb sauce.  It was pretty good; just not what I was expecting. 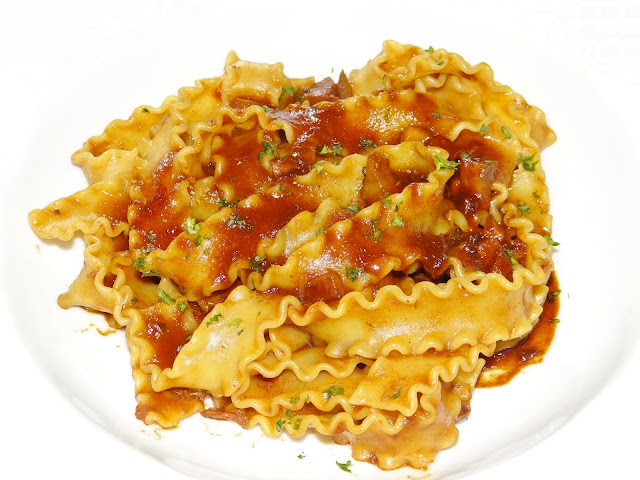 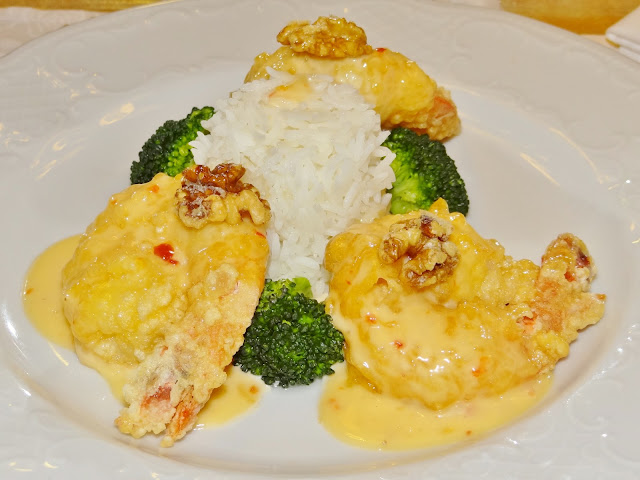 I spent a little while on the computer; but it was another exhausting day.  I knew I would have no trouble getting to sleep tonight. 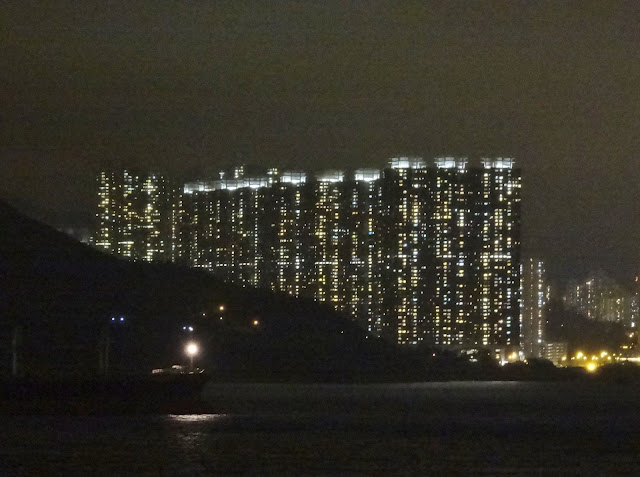