I woke up at 6:30, just as it started to get light outside.  It’s hazy out there; & we are cruising around the southern end of the Japanese Island chain.  We will be ‘scenic cruising’ throughout the day as we make our way up to Osaka later tonight.  I lounged until the start of the morning show; & was able to answer one of the trivia questions (a cartoon caricature of) .....”Horse Whisperer”.

Capt. Glenn reported that we are cruising between 14-16 knots, depending upon the amount of traffic in the passages.  It’s 61* at 9am. He told us to be on the lookout for a series of 3 bridges starting around 10 am.  The Capt. will be adjusting the speed according to tidal conditions so that we hit certain checkpoints according to schedule. Sounds like somebody is going to be busy on the bridge today.  His thought for the day, “Winners make goals. Losers make excuses.”

I went up to the Bistro at 9:20.  Celeste was already there; & we had time to get caught up over breakfast consisting of my favorite meats, cheese, custard tart & a hot cross bun (which didn’t pass muster with me).  She filled me in on her dinner with Greg Michel, which turned into a ‘cross examination’ by the other invited guests.  They obviously took advantage of the opportunity of 'having his ear' to show their displeasure with some of Crystal's policies.  It appears Celeste was specially chosen to be the voice of reason  & referee at this dinner. 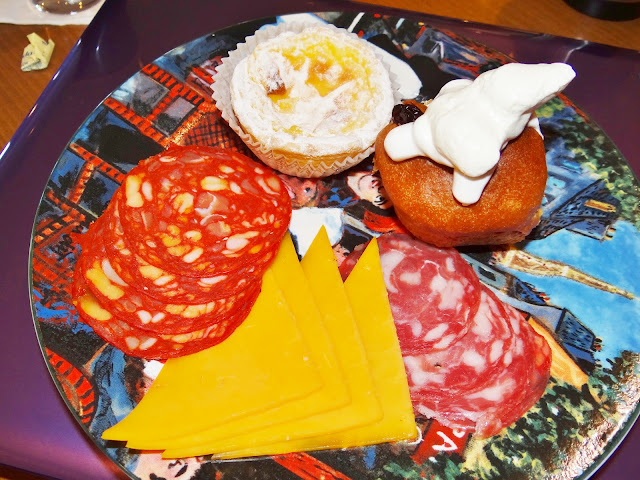 During the morning various friends came through the Bistro, sat & chatted for a while: Elaine, Rick (C.D.), Bill & Kinsey (Elise’s S.O.). Celeste left about noon; but I continued to work on photos until 1:15.  I packed up the mobile office & moved up to the Lido for lunch & a change of scenery.  I had a great lunch of spicy garlic eggplant, prawns, vegetable omelet & ground steak with onion gravy. 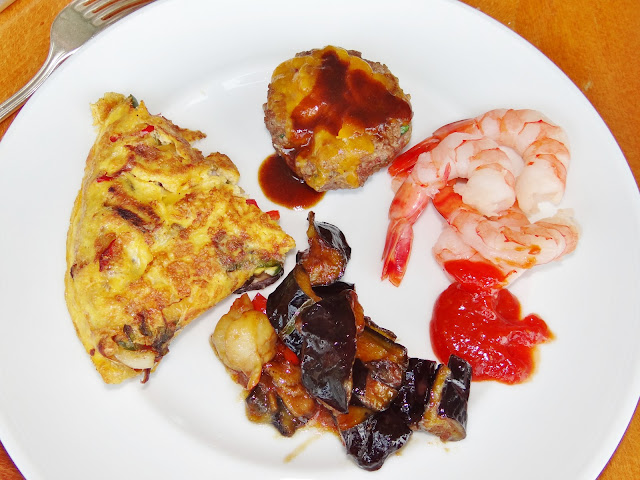 Chuck brought his carving project over & sat a table next to me.  We chatted a good while; then Che came over to visit.  Lido steward, Michael, came to say goodbye as he starts his vacation tomorrow.  And (Dance Host) Jim came with a goodbye hug.  He also leaves the ship tomorrow.  It feels strange saying goodbye to crewmembers, when I’m continuing on.  Never been in that position before. 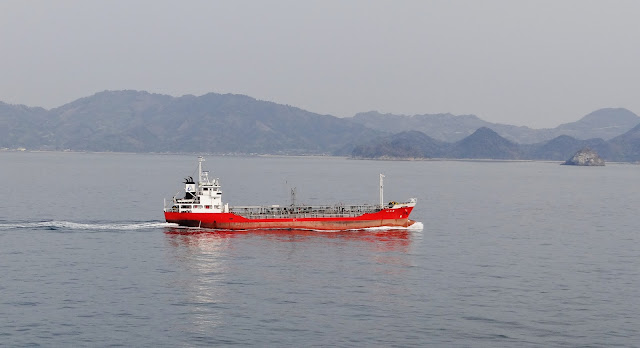 I stayed up there working until 5:30.  The scenic cruising became more interesting as we were getting closer to Osaka & passed several fairly large cities.  The haze finally lifted.  First there was this monstrosity of a bridge called the Great Seto Ohashi Bridge.  It is a series of bridges that connect two huge prefectures of Japan (Honshu & Shikoku islands), skipping across 5 small islands in the process.  The total length is a little over 8 miles, making it the world’s longest two-tiered bridge system. 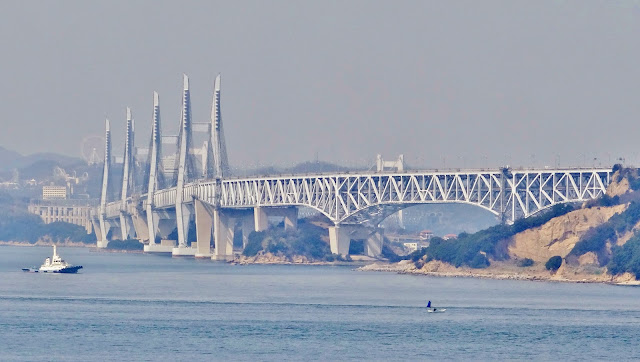 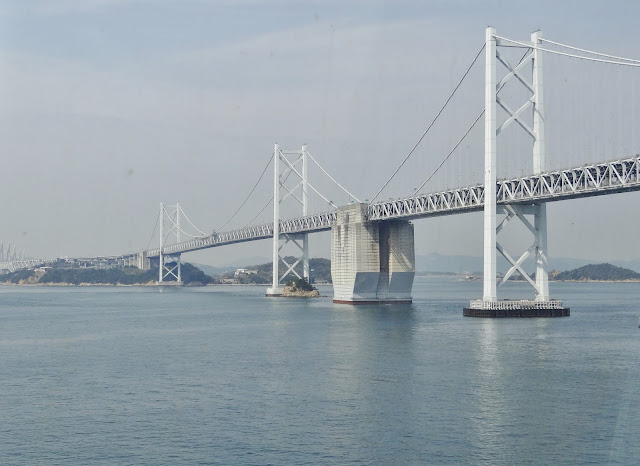 I went back to the cabin to write some long overdue postcards (it’s doubtful that they will make it back to the U.S. before I do).  An urgent note was shoved under the door, notifying us that Osaka now requires all Passengers to carry their passports ashore with them.  So I rushed down to the front desk to pick that up & drop the postcards into the mailbox.

At 7:30 I dressed & met Celeste, Bill, Jelena & Debbie in the Palm Court for drinks.  This is Debbie’s last night onboard; & we wanted to make it her ‘going away’ party.  The girls looked so pretty; & I couldn’t help but be melancholy. I was really going to miss Debs. 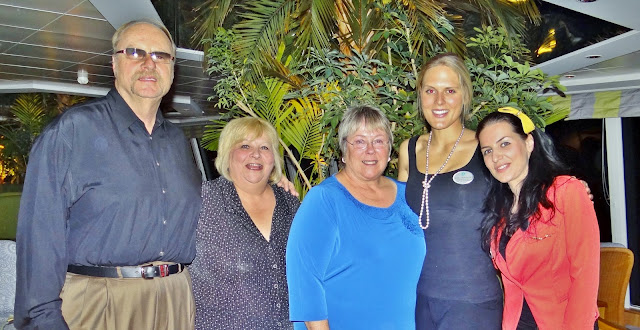 Much to my surprise, Jelena & Debbie turned the tables on me.....an early birthday party.  They arranged for a cake with candles, even the band played happy birthday.  They presented me with cards & even gave me a beautiful purple Swarovski ballpoint pen.  They’ve watched me write in my tour notebook; & knew that I’d love it (because it’s purple) & get plenty of use out of it during the remainder of the cruise.  Well, this started the flood gates; & set the tone for the rest of the evening.  So, I had a couple of drinks tonight.  It is a celebration after all. 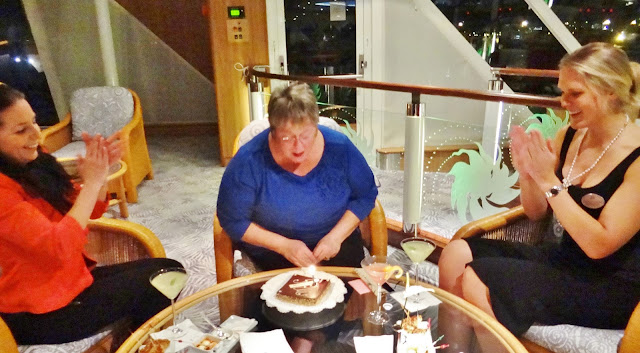 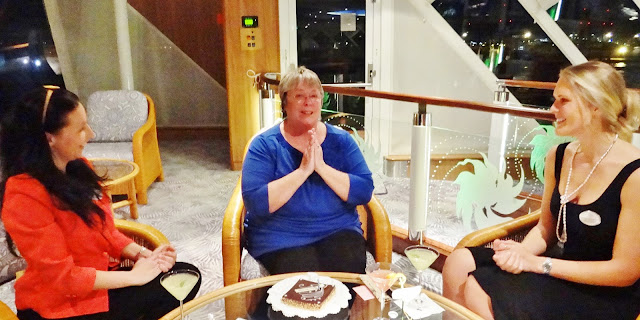 Celeste & Bill had to leave us at 8:40, they had dinner plans.  But we stayed & laughed (& cried) some more.  We watched the approach into Osaka harbor from up in Palm Court.  First thing that we could see off in the distance was a huge ferris wheel illuminated with neon lights that changed colors.  Awesome! 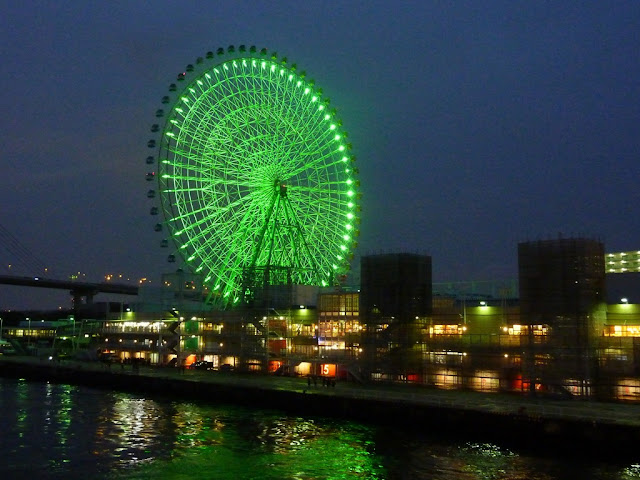 Finally at 10:30, I suggested we call it a night.  Debbie had an early morning; & I had asked Liz to leave my pre-ordered dinner in the cabin at 9:45. Of course, I got choked up all over again saying goodbye at the elevator.  I would share more adventures with Jelena; but saying goodbye to Debs was very hard.  She & Gaye have become very special to me. 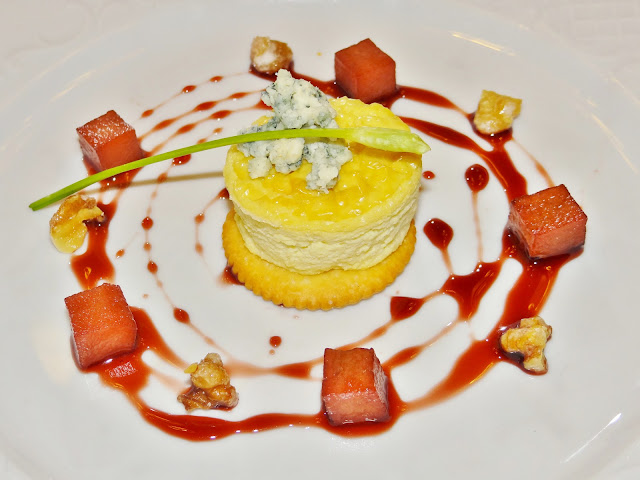 My dinner had sat longer than I intended it to; but I’m not turned off by room temp food.  My appetizer was outstanding; blue cheese cake, sitting on a Ritz cracker, surrounded by little cubes of port wine marinated pear, topped with toasted walnuts & drizzled with port caramel sauce.  A robust, but not pungent flavor. 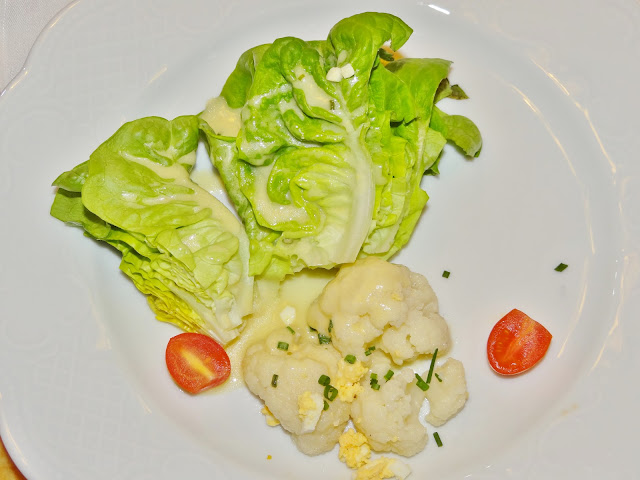 I followed this with a hearts of butter lettuce salad with marinated cauliflower & mimosa dressing.  Excellent! 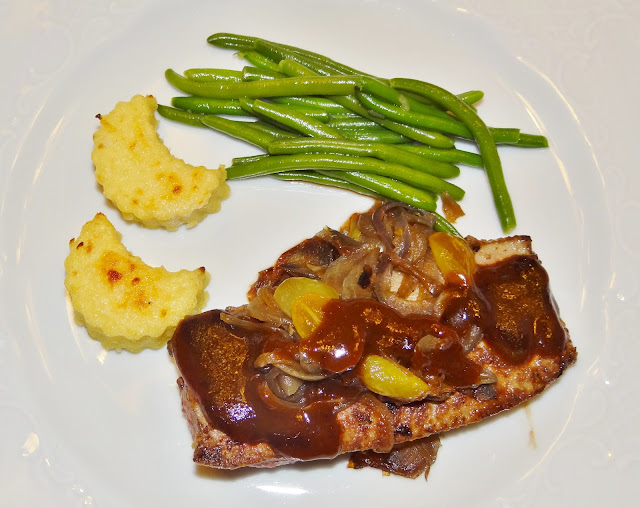 My entree was calf’s liver with caramelized red onions topped with marsala wine sauce.  It was a little too rare for my tastes.  This was accompanied by ever so crisp, steamed green beans & moon shaped semolina gnocchi (which looked more like polenta than gnocchi).  The gnocchi was the highlight of this course. 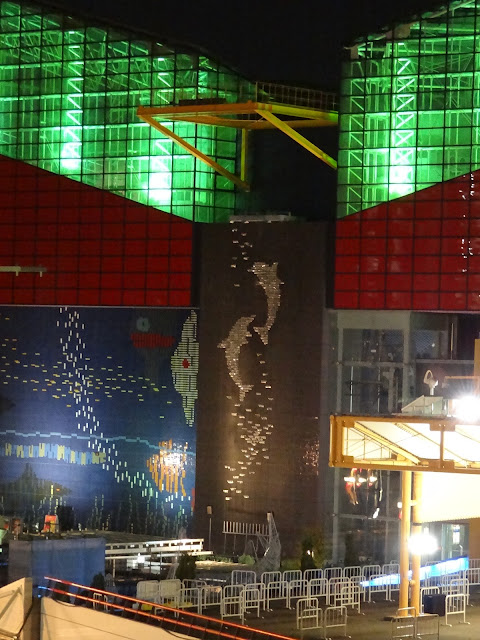 Before getting ready for bed, I decided to step out back & take one last photo of Osaka all lit up.  It looks very pretty; & I can’t wait to start exploring tomorrow. 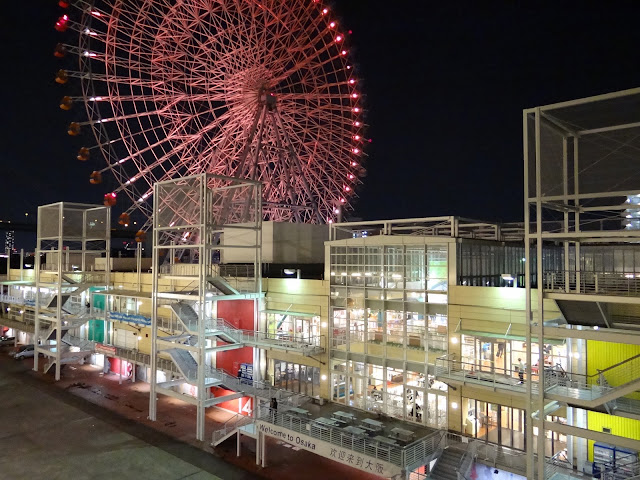