When I finally went to sleep, it was a good sleep.  I woke up on my own at 8:15, so I missed the first few minutes of the morning show.  When I turned it on, I saw that Regis Philbin was their special guest.  He looked as if he felt right at home in this setting.  They were sharing their thoughts on the Beijing overland trip.

Rick started talking about what a great guide we had in Beijing on bus #3. He said he would give a prize to the first person who could call in & identify the guide’s picture.  He flashed a picture on the screen; & someone immediately called in, & said “Raphael Derkson”.  It had to be somebody that was on our bus because the photo showed a man with his face completely covered up, asleep on the bus.  It could have been anybody.  Rick then showed another photo of Raphael with the bus #3 sign sticking out from the back of his jacket collar.  (Those photos were used in my blog entry dated March 24th.)

I had shown those photos to Rick a few days ago; & he asked for a copy. He said he wanted to play a joke on Raf.  I just thought it was going to be some crazy ‘internal’ joke; not on TV.

When Capt. Glenn spoke at 9, he said that the seas would be as smooth as glass all day.  It was 55*.  Since we had such a short distance to travel, he was going to take a little scenic detour.  He was going to sail a little to the south, then a little to the east & then back in a northerly trek off the southern coast of Japan.  Alrighty then.  His thought for the day....”A real liberal person is one who gives away everything he does not own.”

I ran some errands this morning before heading to ‘the office’.  Instead of me eating the rest of the taffy, I distributed some at the photo gallery & the rest at the front desk.  I wanted to check with Johann to see if he, Melanie, Jelena & Leroy had checked their work schedules so that we could agree on a dinner date.  They all don’t have an evening off together anything in the next week. So, we’ll keep trying.

Jelena wasn’t busy, so we had time to talk about her dance performance with Curtis.  They usually had to practice around midnight after Curtis’ last show. She worked so hard; but she said it was fun.  And I told her that we were all so proud of how well she did.

I had some tea with Celeste & Bill in the Bistro about 10.  We chatted until 11, then went to the Starlight to hear Gregg Michel & Thomas Mazloum speak about what’s on the horizon for Crystal.  They showed sketches & outlined the plans for the upcoming refurbishment on Symphony during dry dock in Hamburg.  He shared with us some of the enhancements they will be making in the enrichment program in the next few years.  Adding dim sum to the Tastes dinner menu & the extended hours in the Bistro were all discussed. 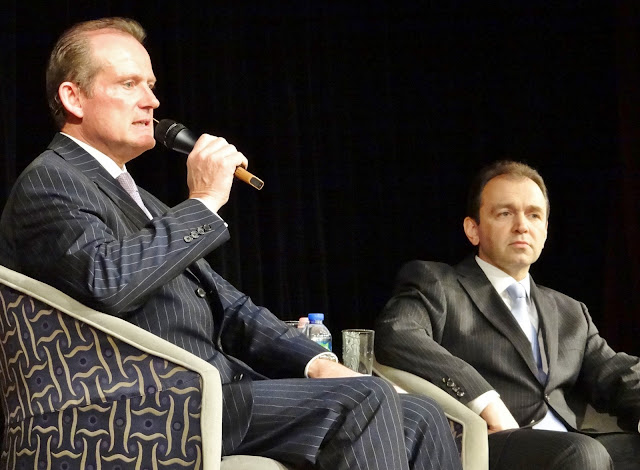 They showed a video of the new ad campaign promoting the new ‘all inclusive’ program that was started on Symphony this month & will follow on Serenity in May.  And I suppose the biggest news was the announcement of the itinerary for the 2015 world cruise.  Crystal will be celebrating their 25th anniversary in 2015; & they are pulling out all the stops.  It will be a true circumnavigation around the globe for 108 days, round trip from Miami.  Wow! 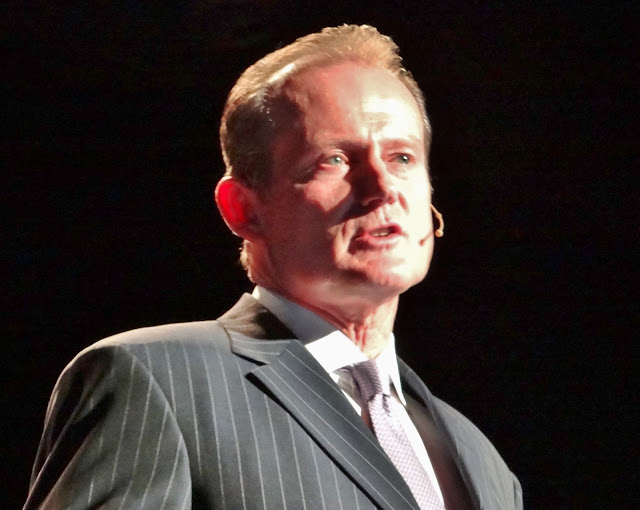 Crystal Cruises President, Gregg Michel
They did open up the floor for questions & answer.  There were a lot of questions regarding ‘all inclusive’ & inevitably the onboard smoking issues. Some of the Passengers were persistent & kept bringing up subjects that weren’t being answered to their satisfaction.  Mr. Michel seemed to keep his cool.  But in my opinion, Mr. Mazloum actually appeared to squirm in his seat a couple of times.  He didn’t seem to be as comfortable with the grilling that was coming from the floor.  I appreciated getting a lot of this info straight from the ‘horse’s mouth’. The new ad campaign gave me a warm & fuzzy feeling.  And I admit to being highly intrigued by the 2015 WC itinerary.  In my dreams..... 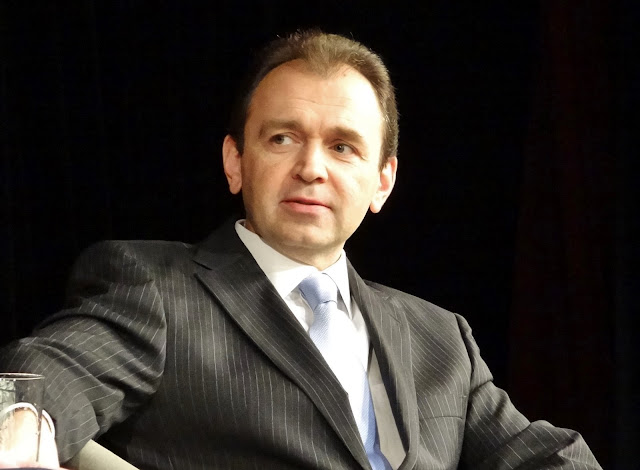 Afterward I went up to the American buffet in the Lido.  I had my regular fix of ribs, jambalaya & okra fritters.  No need to take a photo since we both know what it looks like by now.  As I was about to leave, I spotted Chuck over on the port side working on his stone carving all by himself. I sat; & we had another one of our strange conversations.  Chuck is sarcastically funny, a little crazy & somewhat of an enigma to me. Sometimes I wonder if Mrs. Chuck banishes him up to the Lido.

I went back to the cabin & got a little work done; & then napped for about an hour.  I had already looked at the dinner menu; & wasn’t impressed.  So, I went up to the Trident Grill before it closed to pick up a burger for later.  I hadn’t been up in several days; & didn’t realize that Andres left for vacation in Hong Kong.  This distressed me because I had not tipped him (another example of why I should have been tipping at the end of EVERY segment). He will be back in May; so I want to leave an envelope for him at the front desk (if possible).

I was working furiously on the blog while the internet was still up.  I called Jessie at the C.U. to see if he knew what time we’d be entering Japanese waters & therefore go ‘dark’.  He didn’t know.  I paged Liz to let her know that I had already picked up my dinner; & that all I would need was an ice refill.  When she came 15 mins. later, she brought a bottle of Santa Margherita Pinot Grigio.  It was from the Crystal Society; I have no idea why. But since I’m not a real wine drinker, I will give it to somebody else (as soon as I find out why they gave it to me in the first place).

I was able to get 3 days of the blog uploaded by midnight; & then I worked a while longer on the Hong Kong photos.  My fingers & eyes were weary, so I shut down about 12:30.  I sprayed some of my Benadryl spray on the slowly advancing rash.  It’s beginning to itch some now. Lordy, I do not want to go that doctor’s office & deal with Nurse Ratchett again.